Pain and Pleasure: Some thoughts on And Our Faces, My Heart, Brief as Photos by John Berger

Time and Space are the focus of Berger’s brief yet lovely writings in this impossible-to-classify book.  Part one, entitled “Once” is an attempt to capture  the enigmatic, human experience of time while part two, entitled “Here” explores the concept of space especially in relation to sight and distance.  The text feels like a series of snapshots into Berger’s mind as he uses art, photography, philosophy, poetry and personal anecdotes to grapple with time and space; Hegel, Marx, Dante, Camus, Caravaggio are just a few of the artists and thinkers that are given fleeting attention in his text.

At times Berger addresses his narrative to an unnamed “you” that is his lover.  Time and space have, perhaps, the greatest impact on love, sex, and desire: “The sexual thrust to reproduce and to fill the future is a thrust against the current of time which is flowing ceaselessly towards the past.  The genetic information which assures reproduction works against dissipation.”  And, “Love is a reconstitution in the heart of that holding which is Being.”  Berger’s thoughts to his beloved highlight a painful distance that separates them.  He is writing to her about going to a post office to send her a package or a letter, or he is reminding her of stolen moments spent together or a conversation about art while in bed.  Thoughts on vision and light are mixed with those on distance: “The visible brings the world to us.  But at the same time reminds us ceaselessly that it is a world in which we risk to be lost.  The visible with its space also takes the world away from us. Nothing is more two-faced.”

Berger’s thoughts on the close association between pain and pleasure as they relate to time and space and love were the most interesting for me in this book as it brought to mind other authors who have also delved into this complicated association.  Berger writes, “Pleasure and pain need to be considered together, they are inseparable. Yet the space filled by each is perhaps different.”  And:

It has never been easy to relieve pain.  The productive recourses have usually been lacking—food, adequate medicines, clothing, shelter.  But it has never been difficult to locate the causes of pain: hunger, illness, cold, deprivation…It has always been, in principle, simpler to relieve pain than to give pleasure or make happy.  An area of pain is more easily located.

With one enormous exception—the emotional pain of loss, the pain that has broken a heart.  Such pain fills the space of an entire life.  It may have begun with a single event but the event has produced a surplus of pain.  The sufferer becomes inconsolable.  Yet, what is this pain, if it is not the recognition that what was once given as pleasure or happiness has been irrevocably taken away?

It is no wonder that the Epicureans attempted to follow a philosophy that was constructed around the close experiences of pleasure and pain.  I’ve tried to embrace Epicureanism in particular during this past year, jettisoning things and relationships that bring more pain than pleasure.  It is not an easy philosophy to follow, to say the least, but I have seen some value in it.

Berger brings into his discussion of pain and pleasure the paintings of Caravaggio and the facial expressions he captures in his art.  Berger writes, “I have not seen a dissimilar expression on the face of animals—before mating and before a kill.”  Jean Luc Nancy, who also explores the association between pain and pleasure in his book Coming, uses

Caravaggio’s Ecstasy of Mary Magdalene on the cover of his text.  Nancy argues that pain and pleasure have an intensity in common and in the moments before orgasm the tension that one experiences can be painful: “Sartre says, ‘There is no pleasure that does not know itself as pleasure.’ We could say the same thing the other way around: There is no pain that does not know itself as pain.  Pleasure is a state that seeks out its own perpetuation, while pain seeks out its own cessation, but it’s exactly the same thing in each sense.”  Pain is always present in jouissance, Nancy argues, because its extreme intensity becomes unbearable—it pushes us to our limits.

This connection between pain and pleasure is expressed by Quignard as a constant tension manifested as desire that never achieves jouissance.  In Sex and Terror, a book whose style of prose mixed with poetry and thoughts on art is similar to Berger,  writes:

Something that belonged to happiness is lost in the lovers’ embrace.  There is in the most complete love, in happiness itself, a desire that everything should suddenly tip over into death.  What overflows with violence in sexual climax is overtaken by a sadness that is not psychological.  By a frightening languor.  There are absolute tears that mingle.  In sensual delight, there is something that gives way.

He draws his own sword and plunges the iron into his guts,
and as he lays dying, without delay, he withdraws the sword
from the hot wound.  And as he lays prone on the earth, blood
spews high in the air, similar to when a pipe is split
because of a weak part in the lead and ejaculates a great
amount of water from its  thin, hissing stream and ruptures
the air with its blows.

The thrusting and withdrawal of the sword (ilia in Latin can mean “guts”, “intestines” as I translated it here but it is also the word for “groin”) and the ejaculating (eiaculator in the Latin) could just as easily have been words used to describe Pyramus’s consummation of his relationship with Thisbe. I will end with a fitting quote from John Berger from And Our Faces, which applies, I think, to Ovid’s description of pain and pleasure: “Poetry makes language care because it renders everything intimate. This intimacy is the result of the poem’s labor. The result of the bringing-together-into-intimacy of every act and noun and event and perspective to which the poem refers. There is often nothing more substantial to place against the cruelty and indifference of the world than this caring.” 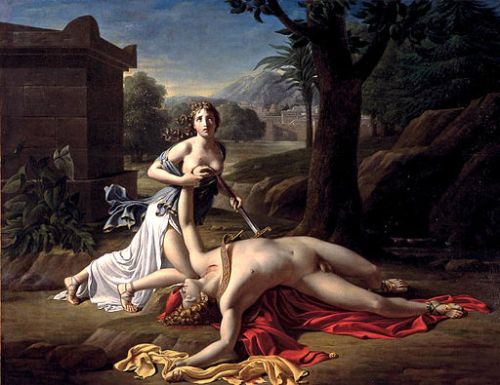 2 responses to “Pain and Pleasure: Some thoughts on And Our Faces, My Heart, Brief as Photos by John Berger”