Survival Is A Style: Poems by Christian Wiman

In the June issue of Poetry Magazine Christian Wiman writes a lovely, thoughtful essay on the poems of William Bronk. Included is a poignant reflection on these lines from Bronk’s collection entitled Life Supports:

This may be the saddest poem I know. As with other Bronk poems it sent me reeling through my own life grasping after my own anchors: my wife and my work, my God. Oh no.

And yet this minor poem brings me major peace. Why? Because it is beautiful, and beauty triggers an instinct for an order beyond the one it enacts.

I’ve spend the week reading Wiman’s latest collection of poems, Survival is a Style, and I shared on Twitter that it is the best one I have read so far this year. Throughout these pieces Wiman contemplates those very anchors that keep him sane and whole. Wiman grew up in a rural part of Texas under the influence of a strict, Christian family. His father died recently of a drug overdose, he has dealt with a crisis of faith, and he is always battling a form of blood cancer that, while not curable, at least is dormant for the moment. One of the most touching poems in the collection is entitled “All You Shining Stars” and describes a simple, spontanous day out with his family—his wife and three children, who are clearly his most important “anchors:

Three kinds of hair in the brush one love
has left on the kitchen counter.
Four kinds of cries when it occurs as one
to blow off school and go to the mountains.
And later, over the river, when the upturned duck
never turns over, five kinds of silence.

Always our elsewheres are also here,
like tributaries so intuitive they seem
almost incidentally literal, tiny trickles
in wildernesses too immense to enter,
the cold clefts and the drastic drops,
cliffs of unthinkable ice.

A lot has been said about Wiman’s use of alliteration, and in this particular poem lines like “the cold clefts and the drastic drops,” as well as his use of numbers lends to the musicality of his verse. There is a sadness mixed with a type of gratitude for moments like these with his family. Similarly in the poem entitled “Baloney” a simple moment at a summer party with friends is captured eloquently:

Poolside, Belgian beer, the lightly ironized light
and splashy laughter of our perfect suburban summer
when from the water, from a child, comes something like
“Look alive, butt crack!”
“It was either that,” Matt says, “or a whippoorwill.”

Over shrimp and coconut rice that Annie made
I recall my dear donnish friend John
who asked that I please not “entertain company” in his bed.
And Samir, who also survived those years on beans, vagabondage,
and long letters that glittered with hopes and Helens,
wondered if I replied, “Will self-pleasure be ok?”

These verses are also an excellent example of Wiman’s charming and sharp sense of humor. The underlying sadness, in the form of nostalgia, still lingers in these lines but friends and his wife are his anchors here.

The longest poem in the collection entitled “The Parable of Perfect Silence” which is featured in Part III, brings together all of Wiman’s thoughts on family, faith, illness, sadness and hope. This poem reminds me of Robert Hass who also likes to tell personal stories in his longer form poems.

Today I woke and believed in nothing.
A grief at once intimate and unfelt,
like the death of a good friend’s dog.

Tired of the mind tracing back in the past for rescue
I praise the day.
I don’t mean merely some mythical, isolate instant
like the mindless mindfulness specialist
who at the terminal cancer convention
(not that it was called that)
exhorted the new year’s crop of slaughters
(ditto)
to “taste” the day, this one unreplicable instant of being alive.
(The chicken glistened.)
Nor do I mean a day devoid of past and future
as craved that great craze of minds and times Fernando Pessoa,
who wanted not “the present” but reality itself,
things in their thingness rather than the time that measures them.
Time is the table at which I sit and the words I type.
In the red-checked shirt my father’s mother used to wear
when she was gardening and which I kept
because it held her smell (though it does no longer)
there is still plenty of time. 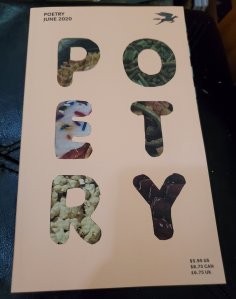 And with Wiman and Hass we are never quite sure where the poet is going—there is always a twist, a surprise, something very unexpected thrown at us: words like “unreplicable” and phrases like “The chicken glistened.” And finally, the plot, if one can call it that in a poem, as Wiman moves in between topics or stories involving his grandmother, his father trying to catch a rat, his diagnosis of cancer and a myriad of other snapshots of memory.

As I was lingering over his collection all week, it occurred to me why it struck such a cord and Alex Caldiero’s poem came to mind: “Poetry is wanted here.” I began to think about my own anchors that have gotten me through the past few months and, just when we thought things couldn’t possibly get worse, the last week. I’ve never been so exhausted in my life—physically, mentally,emotionally. But I have wonderful anchors—my family, friends, fellow readers, students, colleagues, my cats, and poetry, lots and lots of poetry—whose love and support and wisdom and kindness keep me going for another day.