Angulus Coeli: The Violins of Saint-Jacques by Patrick Leigh Fermor 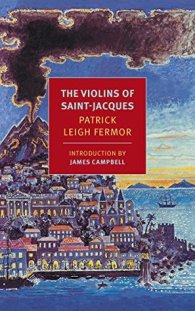 The setting of Patrick Leigh Fermor’s only novel entitled The Violins of Saint-Jacques is a tropical, volcanic island in the Antilles which is dominated by an old, French, aristocratic family that is holding onto their traditional, Jacobean politics.  Not surprisingly, Fermor, most famous for his travel writing, begins his story with a detailed history and geographical description of his fictional island.  He imagines it being occupied by Arawaks and Carib natives and eventually being discovered by Columbus who annexed it for the Spanish crown; he further envisages the island being neglected by Spain and later taken over by the French whose noble families settle on the island and make it as prosperous as Martinique.  Fermor says that his island was little known and that “Cartographer and historian unconsciously conspired to ignore it.”    But he does, however, include an obscure passage, written in Latin, by an Franciscan missionary who is not at all complimentary about this tropical location.  In this addition of the text from NYRB Classics, the Latin is not translated.  I offer my own translation here because it sets up a structure for the important themes and ideas that Fermor explores throughout his narrative:

The island of Saint Jacques, with such wealth and such abundance and adorned with such beauty, seemed as if it were a corner of heaven itself, however, due to the excessive and depraved habits of its populace, due to their boastfulness, the luxury and the gluttony of both the French and the black men, the island of Saint Jacques must be more justly considered, indeed, the worst of all other islands,  a true corner of Hell.

Berthe de Rennes, an elderly woman who now resides on an island in the Aegean, tells the story of Saint-Jacques and the exciting six years she spent there in her youth during the last decade of the nineteenth century.  Her audience is an unnamed Englishman she meets on the beach who visits her over the course of a few weeks while he is vacationing in the Aegean.   Berthe was orphaned, she tells her visitor, and had been taken in by an elderly aunt in France when her cousin, Count Serindan of Saint-Jacques, invited her to come live with his family and serve as the nanny and tutor to his four children.  Fermor beautifully captures the sights, sounds, tastes, textures and smells of this lush, tropical place, and through the descriptions of Berthe’s paintings and drawings of the island we glimpse an angulus coeli (corner of heaven):

The sketch-books covered the entire life of the island.  All of the fine buildings of the capital were there, the statues of Plessis and Rumbold and Scudamore and Braithwaite and Schoelcher; views of savannah and volcanic ravine and stifling forest; punctilious flower-paintings of hibiscus and balisier, of looping lianas, tree-ferns and dark branches where the Night Flowering Cereus grew.  Even the monuments and inscriptions of churches were copied down.  There was an abundance of negroes and negresses in their brilliant village costumes and flamboyantly disguised for carnival.

There is, however, a darker, more sinister side to this island which appears to be a paradise on a merely superficial level.  The Count employs many mulattoes on his estate whose lighter complexions and facial features resemble the Serindans.  Fermor leaves us to imagine for ourselves whether or not the unions between employers and laborers were forced or consensual.  Perhaps the most disturbing instance of debauchery is Fermor’s hint that Gentilien, the Count’s own butler, is the same age as his master and looks enough like the Count to be his brother—a glimpse at the mores improbos (depraved habits) going on for generations on this island.  The Serindan family’s influence over the lives of everyone on the island is eerily described by Fermor as “Olympian” which reference brings to mind the many amorous conquests of the Ancient Greek deity, Zeus.

It is during a ball that the Count throws for carnival that the excess and luxury of the island is fully revealed.  The lavish, overindulgent meal—a reflection of the gastrimargiam (gluttony) noted in the missionary’s Latin passage— that the Count has prepared for his Mardi Gras party brings to mind Trimalchio’s extravagant, Roman cena (dinner) in Petronius’s Satyricon.

The preparations for this decadent meal are a precursor to the wild and outlandish drama that will occur later on that evening.   Fermor is a master at composing exciting stories and weaves a fist fight ending with a duel challenge, an attempted elopement, a prank involving a deadly, venomous snake, and an appearance by lepers disguised as dominoes into the events that all take place during the Count’s Mardi Gras celebration.  Fermor creates an exciting, intense, romantic plot, the pivotal events of which unfold during the ball and involve Berthe, her favorite cousin, Josephine and the arrogant son of the island’s governor.

Volcanic explosions and imagery of hell and burning all permeate the last part of Fermor’s vivid narrative.  In a final, catastrophic, natural event the island pays its cosmic debt for such opulence and becomes the verum angulum Gehennae (true corner of hell) of the monk’s earlier description.    Saint-Jacques manifests itself as a Caribbean version of Sodom and Gomorrah which Biblical locations, because of their excess, are plunged into a fiery, violent, hellish end.  Fermor’s insinuation in the text that Berthe—who now ironically lives in Mytilene, the capital of  Lesbos—is much closer to Josephine than any of her other family members, augments the image of Saint-Jacques as a nineteenth century version of these profligate cities.