Subsumed to Materials of My Art: Summer Snow by Robert Hass 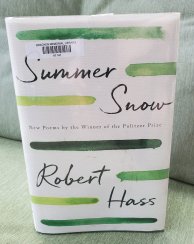 In Summer 2020 edition of The Paris Review, Jesse Nathan ends his interview with poet and author Robert Hass with a couple of unique questions and responses:

In many of the questions that I’ve asked you, even personal questions, you’ve often responded with literary examples before delving into your own experience. I’m curious why you think that is.

I don’t know. It must be the way my mind works. What would be an example?

When we began this interview, I think I asked what the first thing you’d done that morning was. You said that you had peed. And then you were talking about Issa’s haiku on peeing in the snow and Bloom in Ulysses flipping through a magazine while moving his bowels.

There are a couple of possibilities. One is deflection from the personal. Either because you want to keep the private private, or just because it seems narcissistic. I mean, who cares what I do when I first get up in the morning? So I tend to leap toward what brings it to life, what brings a subject to life, which would be all the literary stuff that’s in my head. That would be one explanation. Then, there’s another haiku by Issa that comes to mind—

The man pulling radishes
pointed my way
with a radish.

He’s talking about daikons, those long Japanese radishes. And what I love about the poem as a poem is that Issa has imagined himself stopping to ask for directions, and it’s only after that, as he’s on his way again, that he’s having the thought, the amusing thought, that this guy is so much of his element that he was using his radish to point directions. My impulse is definitely to point with the radish. I have to say, I’m subsumed to materials of my art.

It’s not surprising that Robert Hass can seamlessly move from the topic of his morning pee to the haiku of Issa.  In his latest collection of poems, published in February of 2020 by Ecco, Hass is fond of putting seemingly disparate things together, including the title itself, Summer Snow.   Among the pages of this rather lengthy—for him—collection we still find his usual inspirations from earlier collections which include his surroundings in California, his left-leaning politics, his sense of humor and his friends and family.  But sitting next to ordinary topics in the same long poems are his friendships with literary giants like Eugenio Montale, Milosz, and Lyn Hejinian.  Because he gives himself plenty of space with long prose poems to work out the details of unrelated subjects,  he is successful in making these topics fit together perfectly.  For example, it’s not Montale’s brilliant poetry that Hass remembers in a poem, but a mundane, and odd,  conversation about the word “moose”:

Eugenio Montale asked me if there was an American word
For sprezzatura, particularly with respect to poetry.
In rispetto di poesia, he said. And I said, Yes, in American
We call it “moose” and mentioned several poets,
Frank O’Hara among them, who were quite famous,
As fame goes in our sort of work, for their moose.
He wondered if there was an American expression
To convey the general concept of “Eugenio Monale.”
And I said, Yes, we call it “George Seferis.” I also observed—
I was showing off, but how often do you get to talk
To Eugenio Montale—that, in my view, the prose of Seferis,
Especially his diaries from the last years of the war
And the slow wakening to that devastation after,
Was even greater than his poems, though his poems
At their best gave off pure light like the light that flares
From the white walls on the cliffs above the harbor in Skios
Which can make the eyes ache…

Sometimes it is easy to forget we are reading a poem because of the story-like beginning, but then Hass veers into another topic—in this instance a different poet, George Seferis—and then another topic, the dazzling light of Skios. And at the end he ties his piece together by bringing us back to Montale who asks another question about Americans worshipping the Virgin Mary.

One of my favorite poems in the collection has his usual range of divergent topics, but throughout the entire he stays with deeply personal topics from his own life. These personal reflection poems are just as profound, if not more so, than the ones who feature famous authors. He begins with a scribbling he sees on a classroom blackboard, transitions to a friend whose husband has died of cancer, and ends with a final meditation on the words from the blackboard. We also see another example of the pattern of three distinct parts to each of his longer poems. “A Person Should” begins:

The novel is a mirror in the roadway, I saw scrawled
on a blackboard in an empty classroom at a small college
in the Middle West, A Friday in the all, day’s end,
the swift dark descending, the students gone to their parties,
the long blackboards given over to the melancholy
of chalk dust. Underneath the Stendhal in another hand
someone had written very firmly: Poetry is sheet lightning
in a summer field. Which I took to mean that a person should
be able to name their psychic condition or make a figure of it
or see it illuminated out there somewhere in the gravid air.
I quoted the lines once to a friend whose husband was ill
with pancreatic cancer, not apropos of what she was enduring,
but because she’d asked me what I was thinking about.

I finished this collection last week and since then I keep thinking about why I have enjoyed Robert Hass’s poetry so much. The combination of his narrative, long form poems, his personal stories and their accessibility are obvious reasons. But the truly brilliant quality of his poems, I decided after reading his PR interview, lies in his transitions which make the poems and where he takes us within them unexpected. I think we are following along with his thoughts which are subsumed by personal stories, poetry and literature.