Poem as…:The Book of Baruch by the Gnostic Justin by Geoffrey Hill 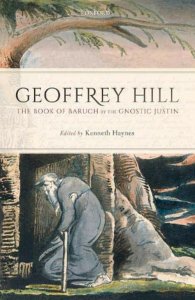 Geoffrey Hill intended the Book of Baruch to be published posthumously and he worked on this collection of poems right up until his death in 2016.  The book contains a sequence of 270 numbered poems with no titles.  It is the most erudite, difficult and engrossing volume of poetry I have ever read, which statement I do not make lightly.  Even though it is a fairly slim volume it has taken me about two weeks to read and absorb Hill’s thoughts, reflections, aphorisms and cultural references.   I have spent hours chasing down references to various politicians, poets, artists, and even rappers that Hill writes about.  These were all of the things occupying his mind as he nears the end of his life.

In the poem numbered 190 he describes this collection which evolves and grows every day as his own time gets shorter: “This, it is becoming clear, is more a daybook than ever The Daybooks were: il mestiere di vivere that secures its own private consistory and guards the door, admitting neither rich nor poor to the designs and details of poetry which are the very devil to portray without favour or fear.”  This short verse is typical of Hill’s reference to other poets or works of art.  The Job or Work of Living is the title of Italian author Cesare Pavese’s Diary in which the author recorded notes about his thoughts and feelings on a variety of subject between 1935-1950. Hill forces his reader to think deeply about the various connections he is making between different forms of poetry.

Hill composes poems involving a dizzying number of poets from Milton to Hopkins to Celan to Desnos and many others he admires: “Some deep poets are like divers with the bends.”  He also has no patience for false poets, those he calls poetasters: “Those who poetaste are not like novices at the piste, learning how to coordinate brain, knee, writs.  To me, they present themselves as a despised caste, breeding on, off, their own waste; ignorant as to why wreaths of myrlte and laurel invest Milton’s bust.”

Many of Hill’s best verses, especially toward the end of the collection, are his “Poem as…” thoughts.  Some are short yet so profound it feels like a punch in the gut (or the knee):

The poem begins as a small tight maelstrom somewhat at knee-height, not quite touching your shins.

Poem as equity release—whatever that is.

Poem as no less an authority on history than whom.

Poem as neuro-linguistic programme with close attachments to the absurd.

And one of my favorites:

Poem to restart pumping system for self-esteem sewage and rage of heart.

And Hill’s expertise and talent with metaphor especially come through on his longer verses about poetry.  Once gain he forces the reader to look at objects and concepts and poems in a completely novel way:

Poem as scimitar-curve, shear along sheer, a ‘Tribal’ class destroyer, veteran of the North Cape run, bearing down on a submarine that has struck and already gone from the scene, leaving sea-rubble wretchedly a-swim, thickslicked in oil.

In poetry, ignorance can sometimes work things to the good, as a form of muse-inducing narcolepsy in which, entranced, you retain evidence of the tombs among which you have danced: mots, etes-vous des mythes et pareils aux myrtes des morts?

Finally, I have to say a word about Hill’s sense of humor which, as far as I can tell, has not been discussed very much.  He is especially adept at turning his biting sarcasm at current affairs:

Foghorn Leghorn and Roadrunner are a particular kind of winner. While their winning is not gaining anything, neither can happy idiocy every fail. All is back on track ready for the next reel, for you ‘bit of a laugh’ philosophe.

Rid us—somebody—God—of callous ignorant administrators, lords of public want, sinecurists of their own failures, bearers of no brunt, inimical to dissent.

And poets, and poetasters, are not above his ridicule either:

Most poets are less capable than those who at airports x-ray our tits and our boots and happily leave us to scrabble.

A dear, kind friend has sent me Hill’s Broken Hierarchies as well as some of his essays and other writings.  I will be occupied (or obsessed) will Hill for a long time to come.

5 responses to “Poem as…:The Book of Baruch by the Gnostic Justin by Geoffrey Hill”