He Held Radical Light: A Memoir by Christian Wiman 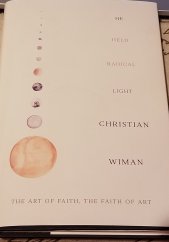 “Awe without an end ends in dread, for however much the mind is lit by the fires of that eternal elsewhere, we inevitably fall back into this singular being that, though it matters so much to us, matters not at all in the furnace of infinity.” —Christian Wiman

Wiman’s memoir is an interesting addition to my list of “auto” books—autobiography, auto-fiction, letters–that I have read this year.  He Held Radical Light, which title is taken from an A.R. Ammons poem,  covers only a few years in Wiman’s life, when he was editor of Poetry magazine, fell in love with and married his wife, and was diagnosed with cancer.  He uses personal anecdotes about the poets he meets, their poetry and his own reflections on and struggles with the meaning of art and faith to describe these eventful years in his life.

It is actually towards the end of this short book, when he is debating whether or not he should leave his position as editor at Poetry and take up an offer from the Yale School of Divinity, when he articulates the overarching themes or questions he is exploring.   He writes, or asks: “What does an authentic life in poetry look like?”  and “What does an authentic faith look like?”  He looks to the many famous poets he has met for the answer to his first question.   The book opens with Wiman’s vivid memory of meeting the poet A.R. Ammons while an undergrad at Washington and Lee University in Virginia:

I was a virgin when I heard Ammons read.  A virgin of poetry readings, I mean, though the experience was probably more memorable and momentous than the other one.  It occurred to me that Ammons might have been equally innocent, and equally confused, as ten minutes into his reading he suddenly stopped and said, “You can’t possibly be enjoying this,” then left the podium and sat back down in the front row.

The poet was coerced into going on for a bit more until he put a definitve end to the reading.  Wiman finishes his Ammon story, “Enough,” he muttered finally, and thudded his colossal body down beside his wife like the death of faith itself.”  The poet Donald Hall, who becomes a personal friend to Wiman, doesn’t have much better advice about what it means to live an authentic life in poetry.  Over lunch one day Hall says to him, “I was thirty-eight when I realized not a word I wrote was going to last.”  And Mary Oliver, whom he meets at a reading while editor at Poetry, puts a copy of Spenser’s Faerie Queene into her bag and says to Wiman, “I’m not young.  I want to spend what time I have left with masterpieces.”

So why do poets continue to write, how do they deal with the fact that, as Wiman realizes, “Nothing survives.”  He includes in this memoir a number of powerful poems whose central theme is death to remind us that, even if they are only ephemeral, they give us some shared language and meaning to contemplate:

Jack Gilbert,  “They Will Put My Body into the Ground”

They will put my body into the ground
Chemistry will have its way for a time,
and then large beetles will come.
After that, the small beetles. Then
the disassembling. After that, the Puccini
will dwindle the way light goes
from the sea. Even Pittsburgh will
vanish, leaving a greed tough as winter.

maybe death isn’t darkness, after all
but so much light wrapping itself around us—
as soft as feathers—
that we are instantly weary of looking, and looking,
and shut our eyes, not without amazement,
and let ourselves be carried,
as through the translucence of mica
to the river that is without the least dapple or shadow,
that is nothing but light—scalding, aortal light—
in which we are washed and washed
out of our bones.

And from Philip Larkin’s “Aubade”

And so it stays just on the edge of vision,
A small unfocused blur, a standing chill
That slows each impulse down to indecision.
Most things may never happen: this one will,
And realization of it rages out
In furnace-fear when we are caught without
People or drink. Courage is no good:
It means not scaring others. Being brave
Lets no one off the grave.
Death is no different whined at than withstood.

Finally, Wiman, as a poet and as a man who was quite possibly facing his own death, gives us hints of what he thinks it means to have an authentic faith.  As someone who spent many of my formative years under the yoke of Catholicism, it was refreshing for me to read about a man whose faith isn’t necessarily intertwined with any particular form of organized religion.  Wiman writes, “I have never felt much confort in the notion of heaven or eternity, mostly because I can’t conceive of these things.  But even more than that, Christianity entails—or at least it ought to—a scouring of the self, the individual ego, and as I said above, most of our notions of eternity and/or heaven amount to nothing more than a dream of the self’s survival.”  He ends his book with a comment about faith and Steven Wallace’s death: “There is much argument over whether or not Steven’s converted to Catholicism on his deathbed.  I yawn just pondering it.  Not because it doesn’t matter, but because the claim of God is too individual, intimate, and inarticulate to admit of this kind of schoolbook speculation.”  Through his anecdotes, his poetry and his personal reflections  in He Held Radical Light Wiman certainly gives us something to consider as far as poetry and/as faith.

7 responses to “He Held Radical Light: A Memoir by Christian Wiman”