Review: A Game of Hide and Seek by Elizabeth Taylor

I bought this title a few months back when the New York Review of Books had a fantastic winter sale.  Please visit their website for a full list of their amazing titles: http://www.nybooks.com/books/imprints/classics/ 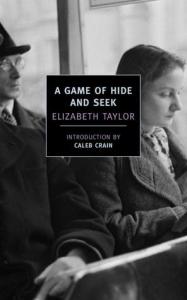 Harriet and Vessey have known each other for their entire lives.  When they turn eighteen there is a physical and emotional attraction between them which neither one feels comfortable or mature enough to acknowledge.  When they babysit Vessey’s younger cousins, they play hide and seek with the children so they can be together; they are so shy and naive that they don’t take advantage of this time alone while they are hiding to reveal their true feelings.

When Vessey moves away and goes to college and eventually begins his second rate acting career, Harriet settles down with a comfortable and safe man named Charles.  But for the duration of her married life she holds Charles up to her ideal image of Vessey against which fantasy Charles could never compete.  Harriet tries to make the most of her marriage by keeping a tidy home and taking care of their daughter Betsey.  But there is a feeling of loneliness and isolation that pervades Harriet’s life.

Taylor also shows us her comedic side in this otherwise serious novel through the introduction of a group of spinster ladies with whom Harriet works at a local dress shop.  They spend their days avoiding work, gossiping, primping themselves and discussing their latest male conquests.  They give Harriet who at this point is still unmarried, the worst relationship advice.

An aspect of Taylor’s writing style in this book that is worth mentioning is her transitions both within chapters and between chapters; time shifts very abruptly in the novel which is fitting for the topics of love, marriage and how our opinions of these things change, sometimes rather drastically, as we grow older.  When Vessey reappears in Harriet’s life she is middle-aged and well-settled in her marriage.  Will she choose a life with Vessey that she has idealized for so many years or will she stay with her husband and daughter and keep her family together.

A GAME OF HIDE AND SEEK is a wonderful novel to begin with if you want to sample Elizabeth Taylor’s work.  In June I will be reading and reviewing her novel A View of the Harbour, which is another reissue from The New York Review of Books.

Elizabeth Taylor (née Coles) was a popular English novelist and short story writer. Elizabeth Coles was born in Reading, Berkshire in 1912. She was educated at The Abbey School, Reading, and worked as a governess, as a tutor and as a librarian.

In 1936, she married John Micael, a businessman. She lived in Penn, Buckinghamshire, for almost all her married life.

Her first novel, At Mrs. Lippincote’s, was published in 1945 and was followed by eleven more. Her short stories were published in various magazines and collected in four volumes. She also wrote a children’s book.

Taylor’s work is mainly concerned with the nuances of “everyday” life and situations, which she writes about with dexterity. Her shrewd but affectionate portrayals of middle class and upper middle class English life won her an audience of discriminating readers, as well as loyal friends in the world of letters.

7 responses to “Review: A Game of Hide and Seek by Elizabeth Taylor”