I received an advanced review copy of this title from the publisher through TLC Book Tours. 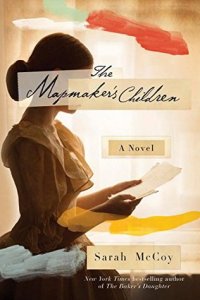 This story is a dual narrative that traces the lives of two women: Sarah Brown is living in the 1860’s and her father is fighting to free slaves, and Eden Anderson is living in the 21st century and lays around wallowing in self-pity and thinking about her fertility issues.  The contrast between the characters of these two women and how they deal with hardships is extreme.  Sarah learns very early on that she cannot have children because of a high fever from dysentery, but she dedicates her life to her father’s cause of helping free slaves through the Underground Railroad.  Sarah draws maps so that these men and women who are desperate to escape their enslavement can make it to safety.  Even when Sarah’s father is hanged for his part in the Harper’s Ferry uprising, she bravely carries on the abolitionist cause at great personal risk.

Eden, on the other hand, is absorbed by anger and depression because she cannot have a child and she sadly takes her frustrations out on her husband.  When the story opens Eden is ready to give up on her marriage and move out.  The juxtaposition between the strength of Sarah and the weakness of Eden makes Eden an even more unlikeable character.  The eleven-year-old girl named Cleo who lives next door to Eden is a much more interesting and feisty character and both she and a dog named Cricket finally challenge Eden to stop feeling sorry for herself.

The two narratives gradually intersect as a secret door in the pantry of Eden’s house reveals the head of a doll.  With Cleo’s help Eden gets to the bottom of this mystery and she, predictably, learns some valuable lessons for her own life.

The strongest part of this novel is the story of Sarah Brown and her family as they fight for the abolition of slavery.  For me the story of Eden and her infertility were distracting and tiresome.  The events of the Harper’s Ferry Rebellion and the fight for freedom is such a powerful and interesting period of history and these events could stood on their own as the focus of an historical fiction novel.

I am interested to hear what other readers think: do you enjoy historical fiction novels with dual narratives in different time frames?

See what other bloggers are saying about the MAPMAKER’S CHILDREN book tour.  Click on the TLC banner below for a listing of all the stops on the tour.

SARAH McCOY is the New York Times, USA Today, and international bestselling author of The Baker’s Daughter, a 2012 Goodreads Choice Award Best Historical Fiction nominee; the novella “The Branch of Hazel” in Grand Central; The Time It Snowed in Puerto Rico; and The Mapmaker’s Children (Crown, May 5, 2015).

Her work has been featured in Real Simple, The Millions, Your Health Monthly, Huffington Post and other publications. She has taught English writing at Old Dominion University and at the University of Texas at El Paso. She calls Virginia home but presently lives with her husband, an Army physician, and their dog, Gilly, in El Paso, Texas. Sarah enjoys connecting with her readers on Twitter at @SarahMMcCoy, on her Facebook Fan Page or via her website, http://www.sarahmccoy.com.

9 responses to “Review: The Mapmaker’s Children by Sarah McCoy”