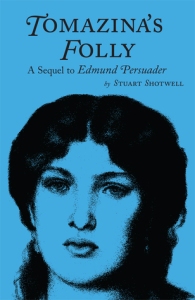 Ovid, in his epic poem the Metamorphoses, demonstrates most deftly the pain of unrequited love through the myth of Apollo and Daphne.  After Apollo mocks and attempts to belittle Cupid, the God of Love strikes Apollo with a golden arrow, the arrow that makes Apollo fall in love with the nymph Daphne.  But Cupid then pierces Daphne with the dreaded lead arrow, the arrow which makes someone turn away from the beloved.  Apollo desperately tries to pursue Daphne and the more she is pursued by Apollo, the more adamant Daphne is in her rejection of him.

When Tomazina’s Folly opens, it is Tomazina who has taken on the role of Apollo and she loves someone who cannot possibly love her back.  As a young, unmarried woman living in 19th century England whose father is devoutly religious, any sort of sexual feelings she might have are viewed as a sin.  Tomazina is tormented by her secret passion to the point where she thinks about harming herself.  Tomazina desires a marriage to a man who will be her intellectual, spiritual and physical equal.  She believes that there is only one man in the world who could possibly fulfill this role and he is already married.  Tomazina views her unrequited love and impulsive passion as her greatest folly.

Tomazina meets an artist named Samson Esterbroke who is in love with a shallow woman who will not and cannot love him back.  Tomazina and Samson forge a friendship through their mutual understanding of one another’s heartache and find that they never lack for interesting conversation.  As their friendship grows, they have stimulating discussions about the imagination and both the positive and negative implications that an active imagination can have in one’s life.  We learn through these characters that without imagination we would never have works of art, clever ideas, or this very novel.  However, when imagination is taken too far we can idealize or idolize something or someone who is not worthy of such high esteem.

Tomazina’s Folly makes us contemplate what it means to have a true and happy marriage, regardless of the century in which we live.  Throughout the novel counterexamples of a happy marriage are given to us in which spouses are more concerned with fox hunting, playing cards, shopping, lace working or gossip instead of each other.  In the 21st century, electronic gadgets and social media are the biggest distractions towards which a husband and wife turn their attentions instead of spending time with one another.  Do we truly talk with and listen to our spouses?  Do we learn things from one another and encourage each other to grow to become better people?

Although I do not know any biographical information about the author, it is evident from the Hampshire Romances that he is a scholar of Latin, Greek, Hebrew, the Classics and the Bible.  Some might view Tomazina’s Folly as a book which proselytizes Christianity due to the author’s extensive quotations of verses from the Old and New Testaments.  However,  the erudite selections of biblical lines challenge the reader, regardless of religion or creed, to become a better person. The characters in this novel would have studied and discussed Christian doctrine, so the words from the Bible are fitting and natural coming out of their mouths.  We want to emulate the characters in this book who strive to be better human beings in their marriages, familial relationships and friendships.

The characters and the intricacies of plot in Tomazina’s Folly are brilliantly expanded upon from the first page until the last.  The eloquent and mellifluous prose will keep your attention and interest throughout the novel as you lose yourself in this 19th century world.  Yes, you will be treated to a story about love and unrequited love but there is also murder, social unrest, and a few antiheros that will keep you avidly turning the pages of the novel.  The writing genius of Stuart Shotwell is unsurpassed by any modern author I have encountered.

In the end, I simply cannot do this beautiful book justice in a brief review.  I only hope that you will read Tomazina’s Folly for yourself and revel in the characters, setting and plot. Through these flawed yet honorable characters you will become more reflective about the impact your own life has upon others.  I can only hope that Stuart Shotwell continues to exercise his vivid imagination and bring us more novels in the series of Hampshire Romances.

Author Interview:
1. I found the title Tomazina’s Folly quite intriguing. Why did you choose the word “folly” to describe Tomazina’s flaw and, in her mind, her sin? Maybe you could talk about the etymology of this word as its meaning has evolved since the 19th century.

The personification of Wisdom is very ancient; it appears in the Old Testament and in Greek and other philosophies and mythologies. Usually the personification is female. Tomazina could have rattled off dozens of examples–such as, “Say unto Wisdom, ‘Thou art my sister; and call Understanding thy kinswoman'” (Proverbs 7:4). You could say that this is because the nouns for wisdom are grammatically female in many ancient languages, but to my mind there is more to it, and certainly the Wise Woman has become a recognized type in literature and lore. The Fool is the flipside of Wisdom, so to speak, and though the Fool as a type has appeared in a vast amount of literature, it’s striking that the personification is usually male–think of the depiction of court jesters, the Tarot, and so forth. But Folly as an abstract is also personified, and again the personification tends to be female.

Frequent in world literature, too, is the theme of “wise folly,” where the one who appears to be foolish is really the wisest of all. Lucian called such people morosophers, the “foolish-wise.” Tomazina would quote you 1 Corinthians 1, where the foolish “wisdom of this world” is contrasted with the wisdom of God, which seems like foolishness to the world. Perhaps the most famous instance of this theme is Erasmus’s work In Praise of Folly, where Erasmus so tangles the themes of foolishness and wisdom in the figure of his personified Folly that it is hard to keep them straight. And again, we’re all familiar with the figure of fools and clowns in plays such as King Lear and Twelfth Night who are actually wiser than anyone else in the play. This wise jester character became such a stock-in-trade that Groucho Marx had to explode it with his wisecrack “He may look like an idiot and talk like an idiot, but don’t let that fool you. He really is an idiot.”

Well, I could rattle on; but obviously this is an incredibly rich theme. Tomazina does think of her “sinful” desires as folly, as you point out, as well as her impulsiveness. But her folly is more than just that. I was attracted to the idea of the person who gradually learns to be wiser in the ways she was foolish before, and learns she is actually wise in ways she thought were foolish. Or to put it another way, she steers herself into a more secure and supportive world where what was once seen as her foolishness is in fact appreciated as real wisdom.

2. What are your favorite, or most influential, author(s) from the 19th century?

George Eliot, who is the greatest novelist I personally have ever read; Charlotte Brontë; Jane Austen; and Dickens, though he is as a technician a cut below Eliot, Brontë, and Austen. I have a warm spot in my heart for Scott, although he can be very frustrating, like a rich and savory meal with a dessert that leaves a bad taste in your mouth (he always rushes his conclusions, it seems to me). Trollope is enjoyable while you read him, but amazingly forgettable afterward, as opposed to Dickens, whose characters are seared on your brain for eternity. Of course, it’s dangerous to praise authors you read long ago; sometimes you go back and reread them and wonder what you saw in them, a phenomenon that has been called “reader’s remorse.” But I would stand by those I have named. I should add for the record that my interests are not confined to the nineteenth century or to British writers.

3. You explore so many universal topics in this book that defy time and place such as the fulfilling marriage, the uses of stoicism, and the implications of an active imagination, just to name a few. What do you think is the most important message that you hope someone in the 21st century will take away or learn from Tomazina’s Folly?

I really couldn’t reduce the messages to just one, but perhaps I could get them down to two or two and a half. I would pick up one you mention: I do believe in marriage, and I think world culture is clogged with negative representations of it. We need to build a healthier culture to support healthy marriage. We need to give people good images of marriage to live up to. That is the function that couples like the Hanscoms serve for the characters in these stories, and then those characters themselves go on to provide an example of such marriages to others within the stories. And the imagination plays a vast part in successful marriage: it allows us to constantly re-envision ourselves in, and to “grow ourselves into,” ever-new roles that are kind and loving with respect to our spouses.

The other message I would like people to take away from Tomazina’s Folly in particular is, fortunately, no longer an original idea, at least in the Western world. That is the importance of educating women. The education of women in absolutely the greatest thing that has happened since the human race came up with something to teach. I believe everyone should be educated to the absolute maximum he or she can possibly endure, and that everyone should actively go on learning all her or his life. But at this time the education of women is still not a given in this world, and until it is, we have to keep shouting about it. I use the term education here in a very wide sense, including spiritual, artistic, and practical education as well as liberal education in the classic meaning of that term. Tomazina stands as an image of a woman absolutely thirsty and starving for knowledge, though she doesn’t often articulate that drive in her own thoughts. She has educated herself as well as she can, given her rather poor resources, and the promise is made that she will continue to learn and grow as she continues in life. Furthermore, the relationship she enters is one that is deeply nurturing to artistic, intellectual, and spiritual growth; this is one of the stipulations she makes in choosing a partner. To my mind, this yearning for knowledge is just one of the things that makes her “as hot as a two-dollar pistol.”

4. Can we look forward to more novels in the “Hampshire Romance” series? Are there any other writing projects on which you are currently working?

There is a final (third) volume in the Hampshire Romances series. There are also a couple of other novels, one set in the United States in the 1980s; it is typeset but hanging fire because of permissions. The other is set in Britain again, in the first half of the 1800s, but is not part of the HR series. It is about 99 percent complete, but will likely be of (even) less broad appeal.

I would like to sincerely thank the author for answering my questions so thoughtfully.