If you  enjoy the style and setting of Jane Austen’s novels then you will love Edmund Persuader. In fact, I was searching for books similar to Austen when I found this novel. There is currently a giveaway on Goodreads to win lots of copies of this fantastic book. The link is at the bottom of this page after my review. 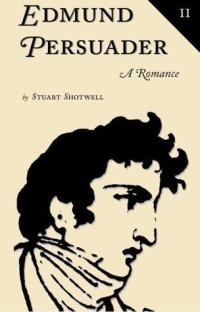 I received Edmund Persuader as a Goodreads giveaway and I am so delighted that I did. I do not say this lightly, but it is one of the best historical fiction novels I have ever read. This is a very long book and is actually 2 volumes. But even after having read all 1500 pages, I was disappointed when it was over. So do not be discouraged by its length.

This novel is set in the early 19th century with Edmund Percy as the main character. He is the third son of a proud English gentleman and Edmund’s older brother Christopher will inherit the family estate. Edmund has studied Theology at Oxford and plans to enter the Church to earn his living. However, just before he takes orders, he is asked by his father to visit the West Indies and straighten out the family’s sugar cane plantation which has been abandoned by a corrupt estate manager.

While living in the Caribbean, Edmund has a crisis of faith as he learns about the brutally harsh lives of slaves that are used to work his family’s plantation. He also meets, falls in love with, and has a sexual relationship with a mulatto slave. This brings about a second moral crisis because he believes he has committed fornication and can in no way serve in the Church of England after committing such a sin.

When Edmund finally travels back to England and takes his orders, he finds his way to his Aunt Andromeda in Hampshire who, widowed and childless, serves as a second mother to him. It is in Hampshire that he receives a position in the church, first as curate and then later as rector. While in Hampshire he meets and falls in love with daughter of a local squire. It is evident, as the novel unfolds, that she is also deeply in love with Edmund as well but she has a dark secret that keeps her from accepting his offer of marriage. Edmund must find out what this secret is and use his keen powers of persuasion to win over the object of his desire.

There are several themes that this book explores about the struggles of men and women in 19th century England. Edmund finds great pleasure in his physical relationship with the mulatto slave in Antigua and he fears that he will never find a proper English woman who will also fulfill his physical needs. The theme of pride and the mistakes and prejudices that are the result of excessive pride are also explored.

This book makes us contemplate the fact that humans make mistakes but that these mistakes can be overcome through redemption and the love of others. The most important theme in this book is that, although we may feel at times that it is impossible to affect changes in society at large, it is important that we show kindness, love and understanding to those in our immediate circle on whose lives we can have a more immediate and positive effect. I highly recommend this book for anyone who loves historical fiction, a great story and engaging characters.

The publisher is giving away a lot of copies of this book on Goodreads. Head over to that site to enter the giveaway and add it to your “To Read” list.

4 responses to “Review- Edmund Persuader: A Romance by Stuart Shotwell”