Review: The Underground By Hamid Ismailov 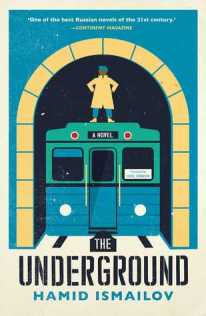 Caveat lector.  Let the reader beware.  This book is deeply sad and does not have a happy ending.  But for many readers a happy ending is not a necessary factor for a book to be considered successful  The narrator of Ismailov’s novel is a child nicknamed Mbobo whose mother is from Siberia and whose father is an unknown African athlete that visited Moscow, and his mother, during the Olympics in 1980.  The boy’s sad story of a tumultuous childhood fraught with domestic violence and racism is told posthumously: “My mother died when I was eight, and I died four years later.”

As a boy, Mbobo oftentimes finds himself being taken from one part of Moscow to another via the city’s subway.  Each of the title chapters in the book is a station from the Moscow underground which is appropriate for the themes of darkness and death that are woven throughout the narrative.  The chapter entitled “Kropotkinskaya Station” begins:

If I ever wanted a tomb for my dead body, I would have picked the Kropotkinskaya Station. That is my vault: elegant and airy, impractical and absurd, standing all by itself, in the middle of the road, like an arch from nowhere to nowhere. If you find yourself on Volkhonk Street and pass under this frilly gape of an arch, you should turn left, you’ll end up in my underground hell, the very station where I, the stoker-imp, am covered in soot. There fountains of flames spurt up toward the hot ceiling from the torch-like pillars, where the light of day is never seen.

Because Mbobo is black he suffers from horrible, daily episodes of racism throughout his young life.  His nickname, Pushkin–the poet’s maternal great- grandfather came to Russia from Ethiopia with Peter the Great— is even a cruel reminder that he is not like everyone else.  When he is at school he is pushed by a bully and he suffers a severe concussion.  While recovering at the hospital, which should have been a safe resting place for him, two other boys tie him up and call him awful, racist names.

The only real solace in his life is the unconditional love shown to him by his mother, whose name is Moscow. He calls her “Mommy Moscow.”  But she has her own issues with alcohol and promiscuity which also affect Mbobo’s life.  Her husband,  whom the child calls Uncle Gleb, is a struggling writer.  On the rare occasions when he does get paid he spends his earnings on vodka and then beats his wife.  Mbobo witnesses regular episodes of domestic violence and oftentimes tries to intervene to stop Uncle Gleb from killing his mother.  When she finally gets tired of his drunken beatings, Mbobo’s mother takes up with a railway police officer named Uncle Nazar.  Even though his second stepfather is kinder to his mother, he is stern and distant with the boy.

When Mbobo’s mother succumbs to her intemperate lifestyle, he is left orphaned.  He bounces between his uncles who attempt to care for him but with the loss of the unconditional love of his mother he is drowned in his feelings of utter and complete loneliness.  These tragedies happen to Mbobo with the imminent collapse of the Soviet Union as the backdrop.  One of the final tragedies that the boy experiences is the renaming of his underground stations that had been one of the few constants in his short life.

The book is fused with literary allusions to the Russian greats: Pushkin, Dostoevsky, Nabokov and Platonov all peak through Ismailov’s text.  The greatest of greats, Tolstoy himself, makes his appearance at the end of the novel which has a conclusion similar to that of Anna Karenina.  Despite the melancholy ending, Ismailov’s talented writing about identity, race, loneliness and the collapse of a government make it a highly successful literary novel.

Ben Winston, who has founded the site Vibrant Margins which is dedicated to bringing small press books to readers through a subscription service, has agreed to give a copy of The Underground as well as Country Life by Ken Edwards to one of my readers. Both of these books, which are great literary reads,  are included in the first subscription season of Vibrant Margins.   If you would like a copy of these books then just leave me a comment and I will randomly pick one US reader.   So that my friends outside the US will also have a chance to read these books,  I will also pick one International reader to win my own copies of these books.

Born in an ancient city in what is now Kyrgyzstan, Hamid Ismailov is an Uzbek novelist and poet who was forced to leave his home in Tashkent when his writing brought him to the attention of government officials. Under threat of arrest, he moved to London and joined the BBC World Service, where he is now Head of the Central Asian Service. In addition to journalism, Ismailov is a prolific writer of poetry and prose, and his books have been published in Uzbek, Russian, French, German, Turkish, English and other languages. His work is still banned in Uzbekistan. He is the author of many novels, including Sobranie Utonchyonnyh, Le Vagabond Flamboyant, Two Lost to Life, The Railway, Hostage to Celestial Turks, Googling for Soul, The Underground, A Poet and Bin-Laden, and The Dead Lake; poetry collections including Sad (Garden) and Pustynya (Desert); and books of visual poetry including Post Faustum and Kniga Otsutstvi. He has translated Russian and Western classics into Uzbek, and Uzbek and Persian classics into Russian and several Western languages.