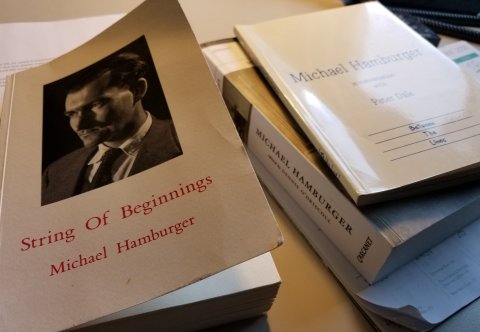 String of beginnings, a lifetime long,
So thin, so strong, it’s outlasted the bulk it bound,
Whenever light out of haze lifted
Scarred masonry, marred wood
As a mother her child from the cot,
To strip, to wash, to dress again,
And the cities even were innocent…
—Michael Hamburger

Of all the autobiographies I’ve read this year, Michael Hamburger’s String of Beginnings has been the most intriguing to me.  Born in Berlin to a Jewish family, “It was the month of the year when Kafka left Berlin to die. It was the day, March 22nd, of Goethe’s death and his cry for more light.  The year, 1924, was one of relative stabilization after the failure of a Hitler-Ludendorff ‘putsch’ and the success of Schacht’s measures against an inflation so extreme that it had turned most Germans into undernourished millionaires.”  Hamburger describes the autobiography, however, as “intermittent” since it only covers the years of his life between 1924 and 1954.

Originally published in 1973 under a different title, A Mug’s Game, and reissued in 1991 as String of Beginnings, Hamburger discusses in an interview with Peter Dale his reasons for limiting the scope of this second edition of his autobiography and for not publishing a sequel:

At one time I had planned a continuation, but my publisher didn’t want another volume, not having done well with the first.  Also, it became clear to me that I couldn’t write a second book on the same lines, as a factual and chronological account.  I then planned an altogether different sort of book, organized by theme, rather than documentary sequence, and with more freedom of movement and association than the chronological presentation had given me.  It had also become clear to me that it is virtually impossible to write truthfully about living relatives and friends in a non-fiction book—or about one’s own life, for that matter.

In the first chapter of String of Beginnings, he also elaborates on his very strict approach to writing autobiography.  Hamburger feels that too many autobiographies read more like novels because of an author’s tendency to embellish the truth.  He says of this genre, “Neither the chronicler’s nor the novelist’s way is adequate, because too much of one’s life is beyond recall, and the experience that made us what we are lies neither in moments nor in recurrences, but in a fusion of both far too subtle to be retracted.”  Much of the text of his autobiography contains direct quotes from letters to friends, family and acquaintances or paraphrasing from diaries that he kept.  Hamburger never veers from his strict writing standards.

Despite the “chronological presentation” of  his autobiography there are three “strings” that he highlights throughout the book which, he implies, affect him for the rest of his life: writing his own poetry, interacting with other poets and traveling.  Although Hamburger is best know for his translations, especially those of Holderlin which he started work on at the age of fifteen, it is the composition of his own, original poems that occupies his mind more than anything else.  The original title of the book,  A Mug’s Game, was taken from a comment made to Hamburger by T.S. Eliot who was reflecting on the, oftentimes futile, life and career of a poet, “‘A mug’s game,’ T.S. Eliot called it, aware of the risk he shared with those whose persistence was a blind obstinacy, a waste of themselves and others.  Or wasn’t it—even at the worst?  Where even the best is for ever being reexamined and re-assessed, where any new development could be a falling-off or a final defeat, mightn’t it be enough to go on trying?”

And go on trying Hamburger did.  Before he enrolls in the army, he spends a few terms at Oxford where he kept writing poetry and subjecting himself to the feedback of other famous poets.  He knows that his biggest flow is that his verse is too mechanical and he is not really seeing enough of life will translate into good poetry: “Though I published early, and had made literary connections even at this time, without being award of looking for them, the only success I wanted was to write good poems…”  Furthermore, he admits that the influence of poets he worshipped, like T.S. Eliot, was too great on him and he had trouble finding his own voice: “It is easy enough in retrospect to see why it took me so long to write my own poems, good or bad.  All my responses were exaggerated, inwardly over-dramatized, as it were, and utterly unstable, because I was trying out one stance, one identity, after another.”

The number of  poets—famous, infamous and obscure—that he meets during his time at Oxford is astounding.  Hamburger argues, “To write about oneself is to write about other people…” and the “other people” whom he discusses most in his autobiography are poets.  He meets Dylan Thomas, Philip Larkin, T.S. Eliot, Stephen Spender, David Gascoyne and Peter Hofler, just to name a few.  The  most intriguing writer of them all for me, however, was a close friend whom he simply refers to as “X.”  X is about ten years older than Hamburger and is an academic; they had a falling out over the publication of Hamburger’s autobiography so Hamburger keeps X’s identity a secret throughout the book.  But X’s impact on Hamburger’s career and life as a poet is inescapable and the entire autobiography would fall apart with the exclusion of this friend and fellow author.   (I’m still curious to know the identity of X and I’m sure that someone has figured it out.  So if you know his identity please leave me a comment!)

The final “string” that one follows through the thirty years of Hamburger’s life is that of traveling.  Even though he and his family emigrate from Berlin to London in 1933, he gets his first real experience of Europe when he is a soldier in the British army during World War II.  He is stationed in both Italy and Austria and his favorite activities in those places are those which take him away from tourist areas and off the beaten path.  After his first visit to Paris he decides that big cities are places he would rather avoid: “If I have no business in a large city, and no close friends, all I find there is ghosts—‘the soul of all those who have lived there.’ absorbed by walls.”  One of my favorite, amusing stories in the book is when he is traveling in Austria, after being released from the army, and he moves from one small town to the next.  In one of these backwater places he stays at a rather strange little hotel which he eventually realizes, after many days, is a brothel.   Italy becomes one of his favorite places to visit, especially the countryside around Florence and Fiesole: “What really captivated me about Italy was the least palpable of phenomena—the mere smells on the banks of the Arno, the precise colour of olive trees, silver-white-green-blue-grey, something about the landscape at Fiesole that I couldn’t describe. ‘Self-sufficiency of the landscape, architecture, people,’ I noted. ‘No need for transcendence.  How the sun melts the written word.'”

Michael Hamburger lived until the age of 83 and I am so sad that there is no autobiographical account of the years between 1955 and 2007.  How did his life evolve in his last forty years?  What other poets did he meet?  How did he view the development of his poetry?  To what other places in the world did he enjoy traveling?  And in his interview with Peter Dale he alludes to his marriage with poet Ann Beresford and some of the troubles they had over the years which I would also have been interested to learn more about.  Maybe some day there will be a thorough biography of Michael Hamburger which will continue with his string of beginnings.

For the extra curious, these are the editions of the books I’ve discussed in my post:

Michael Hamburger in conversation with Peter Dale. Between the Lines, 1998.