I am so excited today to post an interview with Annie Holmes, co-author of Peirene’s new release breach.  The book will be released in August and below is information about the book tour and launch.

About Breach and the Peirene Now! Series: 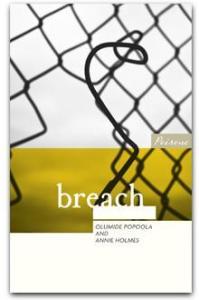 In the refugee camp known as The Jungle an illusion is being disrupted: that of a neatly ordered world, with those deserving safety and comfort separated from those who need to be kept out. Calais is a border town. Between France and Britain. Between us and them. The eight short stories in this collection explore the refugee crisis through fiction. They give voice to the hopes and fears of both sides. Dlo and Jan break into refrigerated trucks bound for the UK. Marjorie, a volunteer, is happy to mingle in  the camps until her niece goes a step too far. Mariam lies to her mother back home. With humour, insight and empathy breach tackles an issue that we can no longer ignore. It is the first title in the Peirene Now! series. This exciting new series will be made up of commissioned works of new fiction, which engage with the political issues of the day. breach beautifully captures a multiplicity of voices – refugees, volunteers, angry citizens – whilst deftly charting a clear narrative path through it all. The story that emerges is an empathetic and probing mosaic, which redefines the words ‘home’, ‘displacement’ and ‘integration’ as the plot progresses towards a moving finale.

Q. This book is very comprehensive in that it covers so many aspects of the refugee experience.  What do you hope is the biggest lesson that readers will take away from your stories?

A. At least two of the non-refugee characters in the book comment on the surprising normality, the village vibe, of the camp in Calais. I hope that when readers put the book down, they too will have met and will remember a host of individual refugees as normal people, albeit in exceptional circumstances – triumphant or defeated, morally compromised or steadfast, amusing or tragic, or the common human mix – each with a full life before her or his journey, looking to the future with some blend of hope and trepidation, just like you or I do. Through fiction, the reader can come to know a character inside as well as from the outside, as a human being rather than a statistic or a type. That’s the effect that I hope our book achieves.

Q. Why did you choose Calais to study and conduct interviews of refugees?  What are typical aspects of the refugee experience there and what is unique to that refugee camp?

A. For the UK and for those seeking to get there, Calais became a symbol. This was the place to across from Europe to the English-speaking refuge you hoped to reach. The last hurdle for would-be refugees to cross. From the other side of the Channel, Calais encapsulated the problem – whether you saw the problem as a threatening “horde” of migrants or as the failure of your own and other European governments to respond to a major human rights crisis and to abide by international law. Refugees headed to Calais – old, young, from many countries, alone or in families or groups – and so too did British and other volunteers, individuals and groups spurred to make up in good will and practical support the shortfall on the part of governments and most international NGOs. Into this convergence flowed the news media, storytellers like us, actors and artists, along with the French authorities, most visible marching bullet-proofed through the camp, and the smugglers, largely invisible. Every player in the migration saga was represented, and then some. The Jungle was a pressure cooker.

Who knows what Calais will come to mean now? Will the town continue to be the platform for dreams and dread, or was the Jungle a short-lived world of its own? Either way, that camp at that time contained multitudes – the many varieties of refugee experience as well as its own unique experiments.

Q. Why did you choose to write short stories instead of focusing on a novel or novella?  Why is the short story a more appropriate genre for your project?

A. We could invoke Chimamanda Ngozi Adichie’s maxim about the stereotyping danger of the single story. By contrast, in eight stories we could present a real range of experiences and characters. But I wouldn’t like to rate different genres as less or more appropriate. A novel format worked brilliantly for Dave Eggers, for example– Zeitoun burned the experience of Hurricane Katrina into the memory of anyone who read it. The more perspectives, the better.

Q. After visiting the refugee camp and speaking with so many displaced people, what is the one memory that most stays with you?

A. I lived in the Calais camp in memory for a long time, writing the book – re-walking paths, re-living conversations, remembering images. Here’s one that didn’t make it into my stories in any way. On the tiny veranda of a brightly painted shack hang three baskets of flowers, as if it’s a beach cottage or a holiday chalet. Beyond, a young man pedals like a maniac on a stationary red cycle, generating power to charge the cell phones lying in a basket fixed to the handlebars. He looks up, catches my eye and waves, a smile on his sweaty face. A bright blaze of energy, despite everything.

Annie Holmes was born in Zambia and raised in Zimbabwe. Her short fiction has been published in Zimbabwe, South Africa and the US. She now lives in the UK. “This is the third continent I’m calling home. My life here in the UK is somewhat precarious (African passport) and somewhat privileged (education and ‘white’ skin). This is also the third continent where I’m witnessing migrants and refugees vilified.”

Olumide Popoola is a Nigerian German writer of long and short fiction. She lectures in Creative Writing at Goldsmiths, University of London. “breach is my answer to the new wave of racism, views that are becoming acceptable again because of old ‘the boat is full’ narratives, because of the fear of the Other. These are stories of complex characters with dreams and fears, lives that started long before they found themselves in Calais.”

All of the dates for interviews and reviews are listed on the banner below: 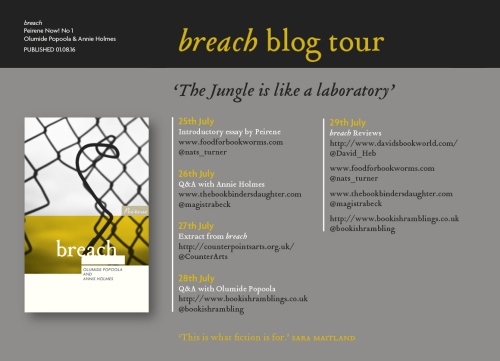