Intellectual Narrowness: Proust on the Dreyfus Affair and Anti-Semitism 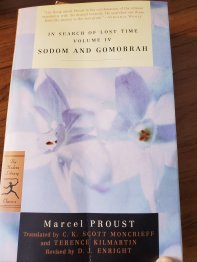 The Dreyfus Affair, opinions about which divided French society from 1894 until 1906, is a topic that Proust keeps returning to throughout In Search of Lost Time. Dreyfus, a captain in the French army of Jewish descent, was accused of spying for the Germans. After a sham of a trial, even when new evidence came to light exonerating Dreyfus, he was sentenced to life in prison. Proust was a Dreyfusard, and, in fact, referred to himself as “the first Dreyfusard,” the term for defenders of the captain who campaigned for a new trial. In a letter to his friend Mme Strauss, who was the model for his character of the Duchesse do Guermantes, Proust attempts to ask her for help in the fight to free Dreyfus: “I haven’t seen you since the Affair, once so Balzacian… has become Shakespearean with the accumulation of its rapid denouements.”

A large portion of the beginning of Sodom and Gomorrah, the sixth volume of Proust’s magnum opus, is devoted to a party at the home of the Prince and Princess Guermantes. Although discussions about The Dreyfus Affair are scattered throughout the previous five volumes, the scene at this party especially brings out the ignorance and anti-Semitism of the shallow upper classes with whom the narrator has been spending a great deal of time. The narrator has been a frequent guest at the dinner parties of his neighbors, the Duc and Duchesse Guermantes but he is still incredulous when he receives an invitation to a party at the Princess’s. What he encounters at this get together is more pretension and shallowness and mixed in with these awful qualities is the tendency of these social elites to embrace racist rhetoric.

Swann, whose mother is Jewish, is considered fully “assimilated” and is even accepted as a member of the Jockey Club, despite his Jewish ancestry. In this scene, however, Swann is gravely ill and it seems that in his last days he chooses to become a staunch defender of Dreyfus. The ugliness and bigotry that the upper class display towards Swann, a man whom they used to hold in the highest esteem as long as he kept his “Jewishness” hidden, is disgusting.

Moreover, and above all, a considerable period of time had elapsed during which, if, from the historical point of view, events had to some extent seemed to justify the Dreyfusard thesis, the anti-Dreyfusard opposition had greatly increased in violence, and from being purely political had become social. It was now a question of militarism, of patriotism, and the waves of anger that had been stirred up in society had had time to gather the force which they never have at the beginning of a storm. ‘Don’t you see,’ M. de Guermantes went on, ‘even from the point of view of his beloved Jews, since he is absolutely determined to stand by them, Swann has made a bloomer of incalculable significance. He has proved that they’re all secretly united and are somehow forced to give their support to anyone of their own race, even if they don’t know him personally. It’s a public menace. We’ve obviously been too easy-going and the mistake Swann is making will create all the more stir since he was respected, not to say received, and was almost the only Jew that anyone knew. People will say: Ab uno disce omnes.”

This scene, and the words of the Duc de Guermantes in particular, reminded me of a letter George Eliot writes condemning anti-Semitism which topic she also made as the center of one of her novels:

There is nothing I could care more to do, if it were possible, than to rouse the imagination of men and women to a vision of human claims in those races of their fellow-men who most differ from them in customs and beliefs. But towards the Hebrews we western people, who have been reared in Christianity, have a peculiar debt, and, whether we acknowledge it or not, a peculiar thoroughness of fellowship in religious and moral sentiment. Can anything be more disgusting than to hear people called “educated” making small jokes about eating ham, and showing themselves empty of any real knowledge as to the relation of their own social and religious life to the history of the people they think themselves witty in insulting? They hardly know that Christ was a Jew. And I find men, educated, supposing that Christ spoke Greek. To my feeling, this deadness to the history which has prepared half our world for us, this inability to find interest in any form of life that is not clad in the same coat-tails and flounces as our own, lies very close to the worst kind of irreligion. The best that can be said of it is, that it is a sign of the intellectual narrowness—in plain English, the stupidity —which is still the average mark of our culture.

Up to this point in the story the Duc is a silly, laughable womanizer who jumps from one mistress to the next. But his racist, ignorant comments make him downright despicable.

A racist womanizer? That might sound familiar to Americans and to British.

Will we ever cast off such stupidity and ignorance?

4 responses to “Intellectual Narrowness: Proust on the Dreyfus Affair and Anti-Semitism”