I received an advanced review copy of this title from Bloomsbury Publishing via Netgalley.  This title has just made the Man Booker Prize longlist for 2016. 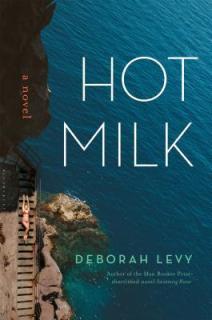 The setting of this book, on the southern coast of Spain, is the perfect backdrop for a summer book.  Sofia has taken her mother, Rose,  to a clinic in Spain in order to treat her intermittent walking problems.  Sophia and Rose rent an apartment that overlooks the beach but Sofia’s mother doesn’t appreciate the beautiful setting because the only thing she can focus on is her poor health.

The main theme of the book is Sofia’s failure at life; she hasn’t finished her Ph.D. in Anthropology, she has a menial job in England as a coffee barista, and doesn’t even have her own home or apartment.  She is at the constant beck and call of her mother whose health issues have been the centerpiece of both of their lives.  Sophia’s mother has mortgaged her home in England in order to pay for this expensive clinic and it is their last ditch effort to get to the bottom of Rose’s health issues.  But it is evident from the beginning of the story that Rose is a hypochondriac and that many of her health problems are psychosomatic.  Have Rose’s health problems held Sophia back from having her own adult life or is Sophia just using her mother’s health problems as an excuse?  Sophia spends their time in Spain mulling over these issues and more.

Levy’s writing style is what I would describe as sparse.  We get the bare minimum as far as the plot is concerned.  For example, Sophia’s father walked out when she was a child and she hasn’t spoken to him in over ten years.  She thinks a lot about him and his new wife and daughter while she is in Spain.  All of a sudden towards the end of the book Sophia is on a plane to Athens to try and reconnect with her father but there is not much of an explanation as to the process of how she decides to get on that plane.  I can appreciate the fact that Levy chooses to spend her words on setting a scene or the inner dialogue of the characters, but as someone who enjoys the details of a plot I would have appreciated more of a back story.

Readers will either love or hate Sophia who seems numb and awash in what is happening around her.  It is perfectly clear that her mother’s illnesses are not serious but she lets her mother take advantage of her good nature as she waits on her hand and foot.  Sophia also has two sexual relationships with both a man and a woman while she is in Spain.  She doesn’t seem especially attached to either of her partners and her sexual preferences for male or female are ambiguous as well.  Sophia’s sexuality is another issue in her life about which she cannot come to a decision.  The most shocking example of her indifference towards her life is her constant encounters on the Spanish beach with medusa jellyfish.  She doesn’t heed the warnings posted on the beaches and swims through these creatures and suffers painful stings.  We wonder if these wounds are self-inflicted just so that she can prove to herself that she is still alive and can feel something.

Finally, I have to say a word about Dr. Gomez who runs the clinic where Rose becomes a patient.  He is well-dressed, well-spoken and since his wife has died, his greatest love is the cat who serves as the mascot for his clinic.  It is evident that Dr. Gomez sees Rose’s health issues for what they really are and Levy’s sense of humor come out through the battle of wills between Rose and Dr. Gomez.  One of the funniest scenes in the book is a luncheon arranged by Dr. Gomez at which he entices a stray cat to scratch Rose’s foot by dropping calamari onto the floor of the restuarant.  His clever little plot reveals that Rose’s feet can’t possibly be numb if she can feel a cat scratch.

This is an interesting books as far as the setting and the character study.  I am curious to see what others think about Levy’s latest novel.  Does anyone think it will make the Man Booker shortlist?

Deborah Levy trained at Dartington College of Arts leaving in 1981 to write a number of plays, highly acclaimed for their “intellectual rigour, poetic fantasy and visual imagination”, including PAX, HERESIES for the Royal Shakespeare Company, CLAM, CALL BLUE JANE, SHINY NYLON, HONEY BABY MIDDLE ENGLAND, PUSHING THE PRINCE INTO DENMARK and MACBETH-FALSE MEMORIES, some of which are published in LEVY: PLAYS 1 (Methuen)

Deborah wrote and published her first novel BEAUTIFUL MUTANTS (Vintage), when she was 27 years old. The experience of not having to give her words to a director, actors and designer to interpret, was so exhilarating, she wrote a few more. These include, SWALLOWING GEOGRAPHY, THE UNLOVED (Vintage) and BILLY and GIRL (Bloomsbury). She has always written across a number of art forms (see Bookworks and Collaborations with visual artists) and was Fellow in Creative Arts at Trinity College, Cambridge from 1989-1991.