I received a review copy of this title from Open Letter via Edelweiss.  This review is my second contribution to Spanish Lit Month hosted by Stu at Winstonsdad and Richard at Caravana de recuerdos.  I am also very excited to say that this is the 300th post on my blog.  I have worked hard on all of my reviews for the past two years and thanks to everyone who has visited and supported my modest endeavors. 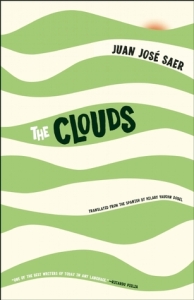 This interesting tale begins in modern day Paris when Pichón Garay receives a disk with the contents of an absurd story about two doctors in 19th century Argentina whose mission it is to cure the mad.  As Garay reads the beginning of the story he learns that no one is sure whether or not this story is pure fiction or has any truth to it.  At times the story seems far fetched and ridiculous, but the ways in which these doctors treat the insane is compassionate and for this reason we hope it’s true.

The narrator of this manuscript is Dr. Real, whose ironic name is a not-so-subtle stroke of genius by Saer. Dr. Real meets his mentor in Europe while in medical school and accepts the position to serve as his assistant while they establish an asylum for the insane in Argentina.  Saer handles the sad plight of the mentally ill in the 19th century with sympathy as he describes their illnesses which are little understood in that time period.  Most of the patients in the hospital are dropped off by the rich and elite who are embarrassed by their mentally ill family members.  It is sad that many of the patients end up with Dr. Real, not because a family wants their loved one to be cured, but because they are fend up and ashamed by the stigma of such an illness.  Saer dwells on the fact that Dr. Real and his mentor employ the kindest possible treatment for these discarded and abandoned patients.

When the clinic is built, Dr. Real is given the task of going to Santa Fe to collect five of the patients that will be treated in the clinic.  The journey from Argentina to Santa Fe is perilous for many reasons and doing it with five very ill patients makes the journey seem absolutely absurd at times.  Saer meticulously describes the symptoms and backgrounds of all five mental patients.  Among them are a nymphomaniac nun who believes she needs to have sex with as many men as possible in order to unite the human with the divine.  There is also an upper class gentlemen who seems well-dressed and charming at first, but after speaking with him for only a few moments Dr. Real discovers this man is severely manic.  There are also three young men, two of which display symptoms of Tourette Syndrome as they repeat certain phrases and noises.  The other is a young man who repeats the same motions with his hands and seems to be suffering with some type of an obsessive compulsive disorder.

The real danger presents itself on the trip back to Argentina when Dr. Real must keep his patients calm while navigating the various treacheries of the plains.  When they set out it is winter and the constant cold and damp makes everyone miserable.  They must constantly alter their course to avoid the flooding river and the constant threat of hostile Indians.  The nun is someone that Dr. Real has a particular time controlling because she is successful at seducing the military troops who are supposed to be guarding the caravan.  By the end of the journey the nun is the best guarded person in the caravan as the soldiers rarely leave her side.

The Clouds showcases Saer’s genius of  describing vivid landscapes.  We feel cold when the winter sets in, damp when the rivers flood and terrified when a fire threatens the caravan.  Dr. Real is reading Vergil’s Aeneid during his journey which epic could not be more appropriate for his excursion.  The comparisons between Dr. Real and Aeneas are endless as I thought about both stories.  But on the most basic level, Aeneas is the perfect hero and role model for Dr. Real who is attempting his own dangerous and seemingly impossible trek across a harsh landscape.

This is the second work I have read of Saer’s and I was captivated by his storylines and his prose in both.  I cannot recommend this author highly enough.

Juan José Saer was one of the most important Argentine novelists of the last fifty years.  Born to Syrian immigrants in Serodino, a small town in the Santa Fe Province, he studied law and philosophy at the National University of the Littoral, where he taught History of Cinematography. Thanks to a scholarship, he moved to Paris in 1968. He had recently retired from his position as a lecturer at the University of Rennes, and had almost finished his final novel, La Grande(2005), which has since been published posthumously, along with a series of critical articles on Latin American and European writers, Trabajos (2006).

Saer’s novels frequently thematize the situation of the self-exiled writer through the figures of two twin brothers, one of whom remained in Argentina during the dictatorship, while the other, like Saer himself, moved to Paris; several of his novels trace their separate and intertwining fates, along with those of a host of other characters who alternate between foreground and background from work to work. Like several of his contemporaries (Ricardo Piglia, César Aira, Roberto Bolaño), Saer’s work often builds on particular and highly codified genres, such as detective fiction (The Investigation), colonial encounters (The Witness), travelogues (El rio sin orillas), or canonical modern writers (e.g. Proust, in La mayor, or Joyce, in Sombras sobre vidrio esmerilado).

11 responses to “Review: The Clouds by Juan José Saer”