Review: Soft in the Head by Marine-Sabine Roger

I received a review copy of this title from Pushkin Press via Netgalley.  The book was first published in the original German in 2008 and this English version has been translated by Frank Wynne. 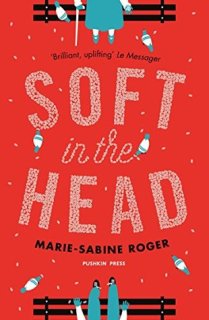 This story is told in the first person by a forty-five year old man named Germain who describes himself as being “soft in the head.”  Germain tells us about his current circumstances and his life as well as his childhood and early years.  He vividly describes his experiences in primary school with his teacher, “The strong get off on walking all over other people, and wiping their feet while they’re at it, like you would on a doormat. This is what I learned from my years at school.  It was a hell of a lesson.  All that because of some bastard who didn’t like kids.  Or at least he didn’t like me.  Maybe my life would have been different if I’d had a different teacher.  Who knows?  I’m not saying it’s his fault I’m a moron, I’m pretty sure I was one even before that.  But he made my life a misery.”  I don’t include very many quotes in my reviews, but when I read this part of the book I had tears in my eyes and I felt like someone punched me in the stomach.

Germain has been treated like he is a worthless moron his whole life, not only by his cruel teacher, but also by his mother and some of the other kids at school.  Germain tells us that his mother get pregnant when she had a one time tryst with a much older man at a summer carnival.  Germain’s mother was labeled a “slut” and an outcast; she takes out her unwanted pregnancy on her poor son, Germain.  She is never affectionate, kind or motherly to him and she hits him at the slightest provocation.  Although Germain is very forthright about his mother’s treatment of him, he never uses her as an excuse for not accomplishing what he wants to do in life.

Germain does, indeed, carve out for himself a rather happy path in life.  He moves out to the caravan in his mother’s backyard so he doesn’t have to deal with her and argue with her everyday.  He feels autonomous and quite content living in a caravan even though it is rather small.  He spends his days tending his large, bounteous garden, visiting with his friends at the local pub, and spending time with his girlfriend, Annette.  One of his favorite daily activities is spending time in the local park where he counts the pigeons.  It is a chance meeting on one of these outings that has a profound impact on Germain’s life.

While on his usual visit to the park one day Germain meets a small and kind elderly woman named Margueritte.  As they start talking they realize that they both enjoy feeding and counting the pigeons.  Margueritte always has a book with her and one day she decides to start reading it outloud to Germain.  His bad experiences at school have made him hate and dread anything to do with reading.  But Margueritte’s book, The Plague, by Camus captivates Germain and it plants the seed of learning in him like nothing else has before.  Margueritte never treats Germain like a moron so he starts to gain some confidence by asking questions and discussing and reading more books with her.  Germain says, “When people are always cutting you down, you don’t get a chance to grow.”  It is Margueritte who serves at the compassionate and encouraging teacher that Germain has been yearning for all of his life.

This is a great read for those who love books about books.  Germain and Margueritte read several books together as they explore the world of literature.  Margueritte also gives Germain a dictionary which becomes his prize possession.  A good part of the story further describes Germain’s growth in other areas of his life.  His experiences with Margueritte have made him a more compassionate and confident friend and boyfriend.  This book serves as a reminder that each and every day we all have the capacity and the choice  to either cut someone down or build someone up.  I absolutely loved this book and was smitten with Germains story and for this reason I think it should be on everyone’s “must-read” summer book list.

About the Author and Translator:

Born in Bordeaux in 1957, Marie-Sabine Roger has been writing books for both adults and children since 1989. Soft in the Head was made into a 2010 film, My Afternoons with Margueritte, directed by Jean Becker, starring Gerard Depardieu. Get Well Soon won the Prix des lecteurs de l’Express in 2012 and will be published by Pushkin Press in 2017.

Frank Wynne is an award-winning translator from French and Spanish. He has won the IMPAC Award, the Independent Foreign Fiction Prize and the Scott Moncrieff Prize. He has translated a number of Spanish and Latin American authors, including Tomás Eloy Martínez, Isabel Allende, Arturo Pérez-Reverte and Tomás Gonzalez, whose In the Beginning Was the Sea is published by Pushkin Press .

9 responses to “Review: Soft in the Head by Marine-Sabine Roger”