I received an advanced review copy of this title from NYRB classics.  The original title was written and published in French in 1928 and this English edition has been translated by Paul Eprile. 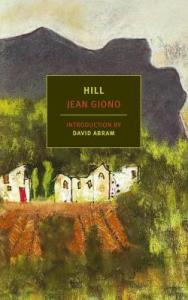 Four families live quiet and simple lives at the foot of a hill in Provence in the early twentieth century.  Their small community consists of four white houses and a small shack for an old bachelor that also lives among these peasants.  Their days consist of working the land, drinking wine and telling stories.  But their bucolic life is threatened when day when a black cat crosses their paths.

Janet, the eldest of the group, has lived at the foot of this hill for most of his life and the last time that this black cat came around it also meant trouble for their little village.  Janet’s son-in-law, a man named Gondran, as well as the other neighbors are all on high alert as they are anticipating some kind of calamity to happen to them.  The peasants believe in many old wives tales and different forms of superstition and to them a black cat is the ultimate sign of bad fortune about to strike.

When their well runs dry and they are desperate for water, the villagers decide that it is finally time to consult Janet about what to do.  But Janet is on his deathbed and spends his days laying in bed and mumbling gibberish.  Janet also has strange visions and at one point he thinks there are snakes coming out of his fingernails.  They are doubtful as to whether or not they can pry some useful information out of this delirious old man.

What Janet gives them is a beautiful and timeless commentary on mother earth and a lesson on how we ought to treat and respect nature.  Janet paints for them a picture of an earth where everything is alive and has feeling.  Every time we chop down a tree, or drive a spade into the dirt or hunt an animal the earth feels it and it hurts her.  The idea that the earth senses pain and actually cries out every time we use a foreign object to dig into the soil was one of the most powerful points in the book for me.

Giono personifies the earth through language rich with spiritual terms; he imagines a supreme protector of the earth who walks around in a sheep skin that was gifted to him by the animals.  And humans have harmed earth so much that the kindly, supreme being can no longer heal her many wounds.

The commentary on the spirituality of nature and our abuse and misuse of the limited resources that the earth gives us is a timely theme that we continue to discuss in the twenty-first century.  We must realize that the pollutants we put into the air, the poisons we put into the ground and the extraction of natural resources all have a negative effect on our environment.  Giorno’s words are just as applicable today as they were almost one-hundred years ago when he wrote this brief yet powerful little story.

The plot itself of this book is not necessarily a page-turner, but the inspirational language and social commentary are well worth the read.

Jean Giono, the only son of a cobbler and a laundress, was one of France’s greatest writers. His prodigious literary output included stories, essays, poetry,plays, filmscripts, translations and over thirty novels, many of which have been translated into English.

Giono was a pacifist, and was twice imprisoned in France at the outset and conclusion of World War II.

He remained tied to Provence and Manosque, the little city where he was born in 1895 and, in 1970, died.

Giono was awarded the Prix Bretano, the Prix de Monaco (for the most outstanding
collected work by a French writer), the Légion d’Honneur, and he was
a member of the Académie Goncourt