I received an advanced review copy of this title from the Publisher through NetGalley.  The original book was published in French and this English translation has been done by Sam Taylor. 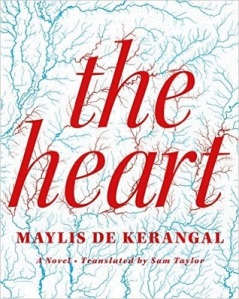 Even though this book is a fictional account of the process of a heart transplant I learned quite a bit of information about the entire, complex procedure.  The storyline in the book takes place over a twenty-four hour period that begins with a surfing adventure.  Simon and his two best friends have woken up at the crack of dawn to pursue their favorite pastime, chasing waves.  I enjoyed the description of their love for this sport and how they go about finding the best waves.  They are young, fearless, and don’t have a care in the world which makes the tragedy that happens to Simon all the more shocking and upsetting.

On the way back from their surfing adventure, Simon’s friend drives the van in which they are traveling into a tree.  Simon’s two friends are both wearing seatbelts so, although they are badly injured, they do survive the accident.  But Simon is sitting in the middle of his friends in the front of the van and is thrown through the windshield on impact.  When Simon arrives at the emergency room it is determined that he is brain dead and the only things keeping him alive and keeping his heart pumping are machines.

There are several parts to the story that are absolutely heartbreaking (I apologize for the bad pun.)  When Simon’s mother arrives at the hospital she is desperately hoping that her son’s prognosis will be not be bleak.  The doctor tries to tell her as gently as possible that her son is brain dead and that his injuries are irreversible.  I sympathized with the doctor who had the role of delivering this horrible news to a mother.  He has to be gentle with his words, but being too gentle might cause her to have false hope.  I think that we oftentimes forget that a medical professional’s ability to effectively communicate with victims and their families is just as important, if not more so, than his or her technical skills.

My favorite character in the book is a nurse named Thomas whose job it is to coordinate the removal of the organs and coordinate their transfer to doctors in other hospitals around the country.  Thomas is also the person who speaks with the family about their decision to have organs donated.  Simon’s parents are in such shock that they don’t even realize who Thomas is or why he is speaking to them.  Thomas takes them to a comfortable room and slowly and compassionately broaches the subject.  Since Simon was not on the national donor registry in France, Thomas asks Simon’s parents what Simon would have wanted them to do.  They are really at a loss for words or ideas because they are in disbelief about what has happened to their son.  Thomas then asks a very pointed question: “Was Simon a generous person?”

What struck me most about this scene is how tender and understanding this nurse is to these grieving and devastated people.  He never pressures them or makes them feel guilty.  And when it looks like they are so upset that they can’t make a decision,  he is ready to give up the entire idea of donation.  I found it fascinating to learn that in France if a person is not on the donor registry then it amounts to tacit consent of organ donation at one’s death.  But Thomas would never even consider taking Simon’s organs without parental consent despite the fact that the law is on his side.  It is my sincere hope that all nurses in Thomas’ situation are as kind and good at their job as he is.

Finally, I have to mention the character who receives Simon’s heart.  She is a woman in her early fifties whose heart has been damaged by a virus.  She is a woman named Claire who lives in Paris and has been on a transplant list for months.  When she receives word that a heart is available for her I found her range of emotions fascinating.  She is not scared to die on the operating table, but instead she is upset that someone else had to die in order for her to receive this special gift.  It also keeps nagging her that she can never know any details about the donor because she wants nothing more than to be able to say thank you to his family.  I would have expected Claire to be happy and relieved that her own life is finally being saved, but her reaction to receiving a new heart is anything but selfish.

The author has done a meticulous job of research in order to bring to the reader the vivid details of the entire process of organ transplant.  After reading this book I will no longer take for granted the fact that these miraculous medical miracles take place in the 21st century.  The author also reminds us that, although unpleasant,  it is important to have conversations about organ donation with our loved ones and to investigate being on the donation list in our respective countries.

Maylis de Kerangal is a French author. Raised in Le Havre, Maylis de Kerangal went on to study history and philosophy in Rouen and Paris. She worked at Paris-based Éditions Gallimard, then travelled in the United States, and went back to studies at the School for Advanced Studies in the Social Sciences.

7 responses to “Review: The Heart by Maylis de Kerangal”