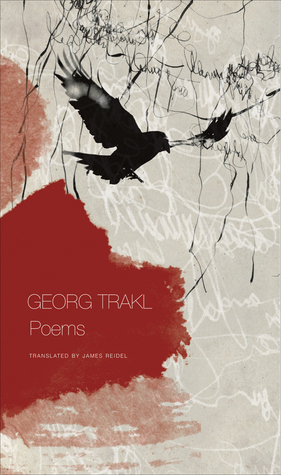 I loved the first novel I read from Seagull Books so I decided to give some of their poetry a try.  I was not disappointed; and, in fact, this small but powerful little book captivated my attention.  I had intended to read a few poems a day over the course of several weeks.  But I finished the collection in a couple of sittings because once I started reading the poems I could not put the book down.

After reading this collection of Trakl poems I was not surprised to discover that he had a very brief and tragic life.  His poems are filled with the language of decay, dying, sunset, twilight, birds of carrion and shadows.  But I got the feeling that despite his internal struggles, Trakl desperately wanted to fight his way out of the abyss and find some meaning, some bright spot, some redemption in what was otherwise a depressing existence.

A common theme in this collection of poems is nature and the natural decay that every living thing experiences.  But mixed within this decay there is also a natural, cyclical process of death and rebirth.  In the opening poem a flock of ravens sense that a meal is near.  They fight over their meal and once sated they fly away, almost gracefully “like a funeral cortege/Into winds tingling with ecstasy.”  Dinner for ravens means rot and decay is present but it is also nourishment and continues their lifespan; it is the fuel that allows them to make that flight at the end of the poem.

One of my favorite poems in the collection “In Autumn” perfectly describes Trakl’s struggle against death and decay.  Although fall is the season where everything starts to wither and die, the poet captures the beauty of this time of the year.  He describes sunflowers that “blaze along the fence” and women who labour “singing in the fields.”  And although he mentions death, the poem ends on a high note:

The dead houses have been opened wide
And painted beautiful with sunshine.

Scenes that capture the essence of autumn and winter abound in this collection.  These are my favorite seasons in New England and may be why these poems resonated so much with me.

Trakl also captures the calm of twilight and evening, the declining of the day,  in several of these poems.  In the poem “Decay,” he manages to bring together decay, autumn and the evening into one short and descriptive poem.  He asks us to imagine him following the birds “in their glorious flight” as they are “disappearing into autumn’s clear breadths.”  And as he wanders “through the twilight-filled garden” Trakl imagines the birds taking flight and he has dreams that follow them along their paths into the sky and onto “brighter destinies.”  Once again, we feel him fighting against his melancholy and wanting to take flight from it like those birds he so admires.

Finally, I have to mention the artwork that Seagull books chose to adorn the cover of this beautiful collection.  The bright red is striking against the backdrop of a scene of nature which is outlined in black.  The choice of a crow on the cover perfectly captures the themes of nature and decay contained within the volume.  Seagull has another volume of Trakl poems forthcoming which I am very eager to get my hands on.

About the Author and Translator:

Georg Trakl was born in Salzburg, Austria. As a teenager he gravitated towards poetry, incest and drug addiction and published his first work by 1908, the year he went to Vienna to attend pharmacy school and became part of that city’s fin-de-siÃ¨cle cultural life. He enjoyed early success and published his first book in 1913. A year later, however, he died of a cocaine overdose due to battle fatigue and depression from the wartime delay of his second book.

James Reidel is poet, translator, editor and biographer. In addition to the works of Georg Trakl, he has translated novels by Franz Werfel and poetry by Thomas Bernhard, among others. He is the biographer of poet Weldon Kees and author of two volumes of poetry.