I received an advanced review copy of this novella from Peirene Press.  This is the third book in their Chance Encounter Series.  This title was originally written and published in Norwegian and this English translation has been done by John Irons. 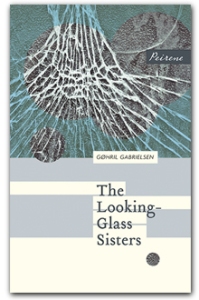 This is an emotionally intense and sinister book that will leave you thinking about relationships with close family members long after you finish the last page.  The focus of the book is on the codependence of two sisters who are each other’s only remaining relatives after their parents die.  When the book opens they are middle-aged and have been living together in isolation on the outskirts of rural Norway for almost 30 years.

The first sister, the one who is the unnamed narrator of the story, has been physically handicapped since she was a little girl.  She contracted a high fever which caused her to be in the hospital for several weeks and the illness left her paralyzed from the waist down.  She must rely on her parents for all of her needs and when her parents die the only other person she has left in her life is her older sister, Ragna.  The sisters live in a remote house that no one ever visits and the only way to reach the local village for supplies is by snow sled.

But one day the routine of the sisters’ lives changes when a man named Johan moves into the area and starts to court Ragna.  We get the sense that Ragna has been resentfully taking care of her sister for years and has never really developed any life of her own because of the constant needs of  her invalid sister.  Ragna seems bitter and at times she is emotionally and physically cruel to her disabled sister.  There is one scene in the book that is particularly painful to read;  the handicapped sister has to use the bathroom and drags herself out of bed with her crutches and just before she reaches the bathroom, Ragna runs in and locks the door.  Ragna refuses to come out of the bathroom and the crippled and helpless sister is forced to relieve herself in her pants.  Her dignity is further eroded when she then must be cleaned up and carried back to bed by Ragna.

When Johan comes along and decides to marry Ragna, it seems that Ragna could not be happier now that she has the opportunity to rid herself of the burden of her sister.  At times I felt sorry for both sisters.  On the one hand, the handicapped sister cannot help her situation and she has no choice but to be constantly asking her sister for everything she needs.  On the other hand, Ragna must constantly be at her sister’s beck and call and Ragna feels that her sister is never grateful for what Ragna does for her.  We also get the feeling throughout the narrative that the disabled sister has a very narrow view of the world and doesn’t understand what is going on outside her room or how her constant demands affect her sister.  At times she appears paranoid and melodramatic.

This novella brings up some interesting thoughts about family members and our obligations to them.  If we are the only ones left to take care of a loved one are we obligated to do so to the detriment of our own lives?   But if we can’t rely on our family, then who else is there to depend on in times of need?  In the end, Ragna and Johan make a selfish decision in favor of making peace and quiet for themselves.

The novellas published by Peirene are meant to be read quickly, in a matter of a few hours.  But I found this book so dark and intense that I could only read it a few pages at a time over the course of several days.  The final book in the Chance Encounter series is a stunner that is the perfect way to finish out this set of novellas.

Gøhril Gabrielsen, born in 1961, grew up in Finnmark, the northernmost county in Norway, and currently lives in Oslo. She won Aschehoug’s First Book Award for her 2006 novel Unevnelige hendelser (Unspeakable Events), and was the recipient of the 2010 Tanum Scholarship for Women. Since the publication of her debut novel she has brought out two further books to great acclaim in her native Norway, Svimlende muligheter, ingen frykt (The Looking-Glass Sisters) and Skadedyr (Vermin). Her fourth novel is due out in 2015.

19 responses to “Review: The Looking Glass Sisters by Gøhril Gabrielsen”