I received an advanced review copy of this title from New Vessel Press.  They have quickly become one of my favorite small presses, especially for translated fiction.  Published in Hebrew in 1978, Alexandrian Summer appears now in translation for the first time.  This edition has been translated by Yardenne Greenspan.  Please visit the publisher’s website to read about all of their wonderful titles: www.newvesselpress.com . 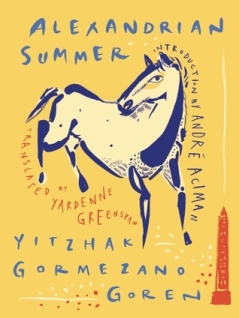 This story takes place over the course of the summer of 1951 as Robby, a ten-year-old boy and his Jewish family share a flat in Alexandria with another Jewish family.  Egypt is an interesting place at the time as people from all over Europe, the Middle East and Africa converge on this country.  Jews, Muslims and Christians all live together side by side peaceably, but in 1951 this pleasant coexistence starts to show some cracks.

The grown-ups in the book are seen through the eyes of Robby who sometimes doesn’t quite understand what is going on with the adults.  His grandmother is constantly gossiping with her friends as they play cards and his older sister goes on dates with different men but doesn’t want to seem to settle down and get married.  At one point Robby and his friend Victor begin to explore their own sexuality and burgeoning bodies.  This part might be disturbing to some readers, but it brings up an important issue about how children learn about sex, attraction and how their bodies function.

The Hamdi-Ali family, who live in Cairo during the rest of the year, move in with Robby’s family for the summer.  The language of the book perfectly captures the atmosphere of Alexandria with its cool breezes from the ocean that  stave off the heat of the Libyan desert.  The residents of this seaside town are also captivated by the horse races that take place during this hot and dusty season.  David Hamdi-Ali is a famous jockey whose most important race during the summer is against an Arabian Muslim.

The horserace between David and the Arab becomes a metaphor for the tension that is steadily growing between Muslims and Jews in Egypt at this time.  David’s father, Joseph, is also a symbol of this religious tension as he feels guilty for abandoning Islam and converting to Judaism in order to be able to marry his Jewish wife.  When Joseph’s son loses to the Muslim, he views this as Allah’s punishment because Joseph turned his back on his faith because of his love for a woman.

This is a rather brief novel, but there are so many elements within it to think about and digest.  The author has brilliantly created an interesting cast of characters that represent all stages of life, from childhood to old age, and the very human struggles that we encounter during each of these stages.  ALEXANDRIAN SUMMER is sensual, funny, descriptive and a fabulous story that I highly recommend.