The New York Review of books had a fantastic winter sale and I bought several books, including this one, at a fantastic discount.  This book was originally written and published in French in 1890.  This English version has been translated by Richard Howard. 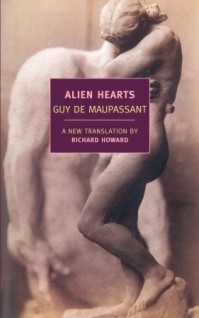 André Mariolle is wealthy enough to pursue various arts without having to make a living from them.  He dabbles in a little bit of everything from playing music to writing.  He is content with mediocrity in his life and he is happy to surround himself with other artists and move in the creative and intellectual circles in Paris.  One day he is invited to the salon of Madame du Burne and his quiet, unassuming life is changed forever.

Madame du Burne survived an abusive, although brief, marriage and when her husband dies and leaves her a widow at the age of 30, she puts all of her wealth and energy into entertaining the most creative minds in 19th Century Paris.  Novelists, sculptors, musicians and singers all attend her salon and an invitation from her is the most coveted one in town.  But we learn that Madame du Burne has some deep-seated psychological issues as far as relationships with men are concerned.  She is an unrelenting coquette who makes men fall in love with her and she collects men like she collects art.  She toys with their emotions, but once they fall in love with her she never returns their feelings.

When Madame du Burne meets Mariolle he seems to have a different affect on her; she favors him more than the other men in her “collection,” but is she really capable of truly loving someone in return?  Mariolle falls hopelessly in love with her and writes her beautiful love letters and tries to be around her as much as possible.  Despite her sad experience with marriage, it is hard to feel sorry for Madame du Burne.  She appears to appreciate artists and intellectuals but it becomes obvious throughout the novel that she is just using them for her own selfish and vain ends.

Maupassant’s language, especially when he is describing the process of falling in love, is poetic and melodic.  His metaphors aptly capture the burning ardor of Mariolle’s feelings as well as the torment he feels when his love is not returned.  I was reminded several times throughout the novel of similar sentiments expressed by the Latin poets Catullus and Ovid who are also pulled in various emotional directions by romantic love.

The ending of this book is abrupt, unexpected and puzzling.  ALIEN HEARTS is a short read full of passion, love and frustration and I highly recommend this emotionally charged novel.

Henri René Albert Guy de Maupassant was a popular 19th-century French writer. He is one of the fathers of the modern short story. A protege of Flaubert, Maupassant’s short stories are characterized by their economy of style and their efficient effortless dénouement. He also wrote six short novels. A number of his stories often denote the futility of war and the innocent civilians who get crushed in it – many are set during the Franco-Prussian War of the 1870s.