Review: If I Fall, If I Die by Michael Christie

I received an advanced review copy of this book from Hogarth through NetGalley.
My Review: 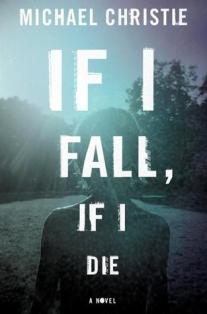 Diane is an agoraphobe and has not been outside the walls of her house in Thunder Bay, Canada for over 8 years and, therefore, neither has her eleven year old son, Will.  As the plot progresses, we learn that Diane has suffered many loses in her life and her eventual retreat into her own little world and her attempt to bubble wrap her son against danger is a result of her traumatic past experiences.

Will spends his days painting, exploring his house, and answering the door for deliverymen but he never ventures Outside.  Will’s world exists of Inside, with a capital “I” and everything else is considered Outside, with a capital “O.”  Outside is a scary and dangerous place and is full of things that can kill a small boy in an instant.

The best part of the book is the character of Will who is brave, clever and, despite his mother’s illness, a very happy boy.  At first I thought this would be an extremely tragic story because of the effects of Diane’s agoraphobia on Will.  But Will’s natural curiosity and sense of adventure are what draws him to the Outside.  He possesses an inner strength to deal with situations that many adults would shrink and hide from.  When he is made fun of at school for being different he perseveres; when one of his friend’s goes missing he insists on putting himself in danger to find him; and when his friend Angela is bedridden in a hospital because of a fatal lung disease he visits and comforts her.

Will’s best friend is an Indian boy named Jonah and Jonah introduces him to skateboarding.  I found this aspect of the book an apt metaphor for the struggles that Will faces and in turn teaches his mother to face.  Even though he is not good at skateboarding and he falls down often, he understands that the only way to conquer his board is to fall down.  His bruises will heal and he can get right back on his board and try again.

IF I FALL, IF I DIE is heart-warming, thought-provoking, cleverly-written and funny story. Michael Christie has written a fabulous first novel and I am eager to see what else he has in store for his readers.

Michael Christie’s debut book of fiction, The Beggar’s Garden, was long listed for the Scotiabank Giller Prize, a finalist for the Writers’ Trust Prize for Fiction, and won the Vancouver Book Award. Prior to earning an MFA from the University of British Columbia, he was a sponsored skateboarder and travelled throughout the world skateboarding and writing for skateboard magazines. Born in Thunder Bay, he now lives on Galiano Island with his wife and two sons. If I Fall, If I Die is his first novel.

Michael has just written a fantastic article for the “New York Times Opinionator” in which he discusses skateboarding, living with an agoraphobe mother, and becoming a parent for the first time himself.  Click here to read the full article.

4 responses to “Review: If I Fall, If I Die by Michael Christie”