Review: Turtleface and Beyond by Arthur Bradford 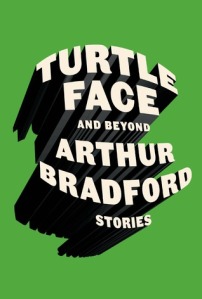 This collection of stories can be categorized as dark comedy and I have to admit that I laughed out loud at the stories many times.  The author’s subtle and ironic wit permeates all of the tales.  In the title story, “Turtleface,” Otto dives off of a cliff into a river and sustains a disfiguring facial injury.  It turns out that he hit a turtle when he entered the water.  Georgie, the narrator of the stories, finds the injured turtle, spends $800 to nurse the turtle back to health, and keeps it in a pool in his apartment.

Although all of the stories stand alone as individual narratives, they are all focused around episodes in the life of Georgie.  He has many adventures and makes irresponsible decisions that lead to comical, and sometimes tragic, outcomes.  He loses part of his leg in a wood chipper, lives in a communal farmhouse full of hippies one winter in Vermont and buys a house with a mysterious metal box that sits in the backyard.

Georgie also encounters strange and sometimes sad people in his adventures.  He lives in interesting and varied places, from Thailand to New York City.  Georgie also has a string of interesting jobs which include working in a legal library, writing short stories for magazines and cleaning up in a nursing home.  All of these elements are adroitly combined to make TURTLEFACE AND BEYOND an entertaining and clever collection of short stories.

Arthur Bradford is an O Henry Award winning writer and Emmy-nominated filmmaker. His writing has appeared in Esquire, McSweeney’s, Vice, Men’s Journal, and many other publications. His first book, Dogwalker, was published by Knopf and Vintage paperback in 2002, and has been translated into ten languages. In 2012 McSweeney’s published Benny’s Brigade, a children’s book. Bradford’s newest book, “Turtleface”, has been published by Farrar, Strauss, and Giroux.

Bradford is also the creator and director of the acclaimed “How’s Your News?” documentary series, versions of which have been broadcast on HBO/Cinemax, PBS, and Channel Four England. He developed the concept into a series for MTV which ran throughout 2009. A new film in the series, “Election 2012” was released Oct. 2012 and can be seen in full at howsyournews.com. In 2011 Bradford directed the Emmy-nominated documentary, “Six Days to Air”, about the making of South Park, for Comedy Central. He is currently shooting a feature documentary about Trey Parker and Matt Stone.

Bradford lives in Portland, Oregon and works at a juvenile detention center.