Review and Giveaway: I Looked For the One My Heart Loved by Dominique Marny 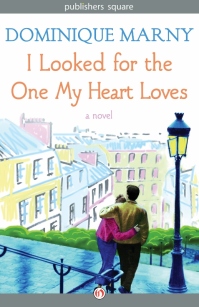 Anne and Alexis are separated by war as children and reunited later by destiny. A powerful and dramatic love story that spans decades in spite of its seeming impossibility.

Anne, 9, and Alexis, 11, grow up together in the Montmartre area of Paris. While she has a major crush on him, he merely sees her as his friend’s little sister. After WWII begins, the two are separated as their families flee Paris to avoid the German occupation. When they say goodbye, Alexis promises to always protect Anne.

Anne holds on to this promise for years as she constantly thinks of Alexis, wondering where he may be. Anne grows up, finds works in an art gallery, and marries a kind, devoted man with whom she has two children. But her heart still belongs to Alexis and she never stops looking for him. Their paths cross fatefully one day in Brussels many years after they were separated.

Alexis, living in Canada and soon to be moving to San Francisco, has a family of his own; a wife in constant depression and a son. Despite their responsibilities to family and the geographical distance that keeps them apart, Anne and Alexis find a way to love one another, secretly yet passionately.

But after all this time, will they ever manage to be truly together, completely? [provided by the publisher]

This was a lovely book that spans forty years of life in Paris beginning in 1939.  When World War II begins, neighborhoods of families and friends are scattered throughout France.  The main character in the book, Anne, and her family flee to the countryside to live with her grandparents until the turmoil of German occupation settles down.  Anne who, at the time is 9 years old, is very upset to leave her brother’s friend Alexis on whom she has a childhood crush.

At first I thought that Anne’s fondness for Alexis, which she thinks back on throughout her adult life, was unrealistic.  How many of us carry a torch for someone whom they met as a child?  However,  the circumstances surrounding the chaos and destruction of World War II leave an impression on Anne.  Her thoughts of Alexis appear to be more than just a childhood crush; she looks back on the time she spent with him as one of peace and happiness before the war ushered in a period sadness, destruction and change.

Anne seems to be fond of her husband Francois, but he never is the great love of her life.  He is comfortable and takes care her and they have two wonderful children.  They never have anything in common beyond their family.  So when Anne meets Alexis again later in life, she is easily tempted to have an affair with him because of their immediate connection.  They share a past and memories of their old neighborhood of Montmartre and they both have a deep love and appreciation for art.

The author keeps us wondering until the end of the story if Anne and Alexis will ever be able to break free of their unhappy marriages and be together.  I LOOKED FOR THE ONE MY HEART LOVED is a great read for those who appreciate historical fiction set in Paris. 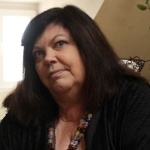 Dominique Marny was raised in a family that loves art, literature, adventure and travels. In addition to being a novelist, she is a playwright, screenwriter, and writes for various magazines.  Watch the video below in which Dominique talks about her book and how Paris inspired its setting.

The publisher is giving away one paperback copy to someone in the U.S. and one e-book to all other International entries. The giveaway is open until 9/14. Click on the link below to enter:

Thanks so much to France Book Tours for hosting another great tour. Please click on the banner below to see all of the stops on this tour and to view other ongoing tours:

10 responses to “Review and Giveaway: I Looked For the One My Heart Loved by Dominique Marny”