Review and Giveaway: The Yankee Club by Michael Murphy

I am very excited today to welcome author Michael Murphy to the blog with his mystery The Yankee Club. You can read my review, enter to win a copy of the book, and visit other stops on the blog tour. 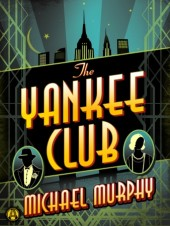 Do you know what a gumshoe is? I have to admit that I had never heard the word until I read Michael Murphy’s novel The Yankee Club. A gumshoe is a slang word used in the 20’s and 30’s for a detective like Jake Donovan, the main character in the novel. Actually, Jake is a former detective, turned mystery writer and when we meet him he is returning to New York City after two years of a self-imposed exile.  I love it when an author uses the correct slang and turns of phrase to put the reader in the mindset of the time period like Murphy does in this noir mystery.

Jake was admittedly running away from his former girlfriend Laura who refused his marriage proposal in favor of focusing on her career as an actress.  His first stop when he returns to New York is The Yankee Club where he reconnects with his old friends.  This novel is well-researched and  with its speakeasies, dames, tommy guns and gangsters and transports the reader to early 1930’s New York where the Great Depression and Prohibition are in full swing.

As soon as Jake steps foot off of the train in Grand Central station he regrets his decision to return to New York.  Laura, the love of his life, is engaged to a banker whom Jake does not trust and his best friend Mickey, who is also a gumshoe, is gunned down in front of his office building. Jake is determined to find his friend’s killer and the hunt to do this puts Jake’s own life at risk several times throughout the novel. Jake finds himself entangled with a group of very dangerous people and discovers that Mickey’s murder was part of a more dangerous conspiracy than he originally thought.

This novel is a fast-paced, exciting mystery but it also has a serious side. At one point in the book Jake walks through Central Park and notices the shanty towns that sprung up because of the Depression. He also encounters destitute families at the bus station and a soup kitchen. Michael Murphy adeptly interweaves the destitute circumstances of Great Depression into the backdrop of the narrative.

It was amusing to see so many famous characters from the time period make appearances in the story such as Babe Ruth, Cole Porter and Ethel Merman. But the author doesn’t just throw them into the story as some sort of literary name-dropping, he cleverly and seamlessly weaves them into the scenes at appropriate points.

Michael Murphy is a full time author and part time urban chicken rancher in Arizona. He lives in Arizona with his wife of forty-one years and the four children they adopted this past year. In August, Random House Alibi will publish his ninth novel, a historical mystery set in the prohibition era, The Yankee Club.

Do you want to win your own copy of this book?  Giveaway ends 8/29.  Click Here To Enter

Please click on the TLC Book Tours logo to visit the other stops on The Yankee Club Book Tour: