…And a Dream: Anna Soror by Marguerite Yourcenar 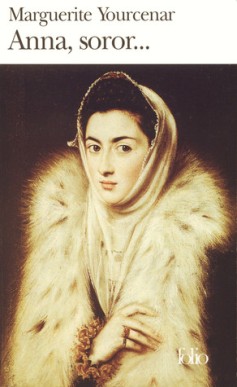 As I was reading Anna Soror, the third and final novella in Yourcenar’s Two Lives and a Dream, I kept thinking about the images of love that Ovid creates in Amores.  The beginning poems in Amores Book I, in particular, depict Love (Amor)—personified as  Cupid replete with arrows— as something to be feared because of its (or his)  unpredictable nature.  The poet himself has fallen victim to this volatile and unruly emotion and he is tortured because it is something over which he has no control.  He begins Amores 1.2 (the translation is my own):

What should I call this, that my bedsheets seem
so hard to me, and my coverlets do not stay in their
place on my bed, and without sleep I have passed
the night, oh for so long, and the weary bones
of my tormented body are suffering? For I think
that I would feel it if I were tempted by love.
Or could it be that cunning Love has crept up
on me with its hidden arts? It will be thus;
Love’s subtle arrows have pierced my heart and
savage Love disturbs my breast which he
already occupies.

The image of Ovid’s tumultuous night recalls the character of Don Miguel who suffers from fevers, insomnia and exhaustion because he is in love with his sister, Anna.  Their story takes place in Naples in the late-16th century when their father, Don Alvaro, is serving as the Spanish Governor of that city.  They live in an elaborate, well-guarded castle and they are raised together by their mother, Donna Valentina, a pious women who cares deeply for both of her children.  Mother, daughter and son form a close bond that largely isolates them from the rest of the world.  When the three of them travel to southern Italy to oversee the grape harvest on one of the family estates, Donna Valentina is taken to her  bed with fever and her ensuing death devastates both of her children.  When their mother dies, the brother and sister oftentimes find themselves alone and this causes a strange tension between them.

Yourcenar, through an extreme example with incest, is attempting to make the same point about love as Ovid did with his poetry; love is unpredictable, it cannot be controlled, and no matter how hard we try to resist it or fight it or reason it away, it is an emotion to which we are all susceptible.  Yourcenar treats her characters with compassion and understanding.  Her story is not shocking, lewd or salacious, but instead she highlights the torment that Miguel and Anna feel in their deep and innocent love for one another.  Their feelings are very subtle at first and neither one of them understands why they are suffering from constant anxiety, haunting dreams and extreme fatigue.  Yourcenar is a master at slowly and steadily building tension in her stories.  She describes Don Miguel on one of his sleepless nights:

He no longer repressed his nightly fantasies.  He awaited with impatience the half consciousness of the mind falling asleep; with his face buried in his pillows, he gave himself over to his dreams.  He would awake from them with his hands burning, his mouth stale as if from a fever, and more obsessed than the day before.

And later, when brother and sister consummate their love during a brief period of joy and passion, Yourcenar’s text is subtle and sensitive.  She only composes a few lines about their sexual encounter: “In the darkness, she discerned his anguished face , which seemed eroded by tears.  The words she had prepared died on her lips.  She fell upon them with an anguished compassion.  They embraced.”  Don Miguel and Anna do not apologize or regret their relationship, but they fear eternal damnation so each chooses a penance in the hopes of mollifying their sin.  Don Miguel volunteers for a dangerous mission to rid the Mediterranean of pirates and dies in battle.  Anna, despite marrying and having two children, never feels the same joy that she experienced in her five days spent with Don Miguel.  Throughout her life she wears hair shirts and prays constantly in the hopes of being released from her sin.

Yourcenar does not shy away from exploring different kinds of forbidden love in her other writings.  In An Obscure Man, for instance, Nathanaël has an intimate, physical relationship with another man that he enjoys and for which he feels no remorse.  He knows the world would judge him for engaging in what are considered unnatural acts, but he refuses to believe that his genuine affection for another man should be considered wrong.  Yourcenar makes it clear in Anna, Soror that Don Miguel and Anna, likewise, are unapologetic for their sincere, kind and passionate love.  It is the church and its laws which they are taught to obey that condemns their connection and it is because of the church that each chooses a penance.

As Ovid’s poem progresses, he realizes that there is no fighting against Love (Amor) so he willfully surrenders to passion and embraces his fate.  The torment of the first scene of the poem in which he is tossing and turning in his bed fades away.   In the Postface to this collection of novellas, Yourcenar’s description of  her characters feels very similar to the force of Love that Ovid experiences: “Their passion is too powerful not to be acted upon, yet, despite the long inner conflict which precedes their fall, is immediately felt to be an ineffable happiness, so that no remorse penetrates them.”

I would also like to share this great article in the New Yorker about Marguerite Yourcenar that Anthony at Times Flow Stemmed recommended to me.  Yourcenar is a fascinating writer and I am looking forward to reading her memoirs as well as her historical fiction novel about the emperor Hadrian: http://www.newyorker.com/magazine/2005/02/14/becoming-the-emperor

Two Lives and a Dream, which includes three of Yourcenar’s novellas, was originally published in 1934 as La Mort conduit l’attelage (Death drives the cart).  The English version I read was translated by Walter Kaiser and published in 1987 by Farrar, Straus & Giroux.  The first two stories in the collection An Obscure Man and A Lovely Morning take place in mid 17th century Amsterdam and England and describe the rough and turbulent lives of a man named Nathanaël and his illegitimate son named Lazarus.  My first impression of Yourcenar’s writing is that she was a master storyteller, especially in the genre of historical fiction.

We are introcuded to the character of Nathanaël in An Obscure Man with a description of his childhood in Greenwich, England to which place his Dutch  parents have emigrated and live in a small community of expats.  Nathanaël was “weak chested and afflicted with a slight lameness” so he was not sent to work on the docks with his father and his brothers.  Instead he becomes an assistant to the town’s schoolmaster who educates him and teaches him Latin, which skill will come in very handy later in his life.  As a teenager, Nathanaël falls in love with Janet, an apprentice to a tapestry maker, whom he defends against the violent advances of a local drunk.  When Nathanaël fears that he has killed the intoxicated man he stows away on a ship bound for the Caribbean and later the primitive wilderness of Maine and Canada.  When the rest of his crew perishes in a shipwreck off the coast of Canada, Nathanaël is saved by an older couple and their daughter, Foy, with whom he falls in love.  Their life in the wilds of the New World is harsh as it is difficult to live such a primitive existence.  But his time in this wilderness, with its simplicity and his uncomplicated love for Foy, comprise some of the happiest moments in his life.

After spending two years in the New World, Nathanaël loses Foy to consumption so he decides to make his way back to England and then to Amsterdam where he works for his uncle as a proofreader in his printing business.  One night he meets a prostitute named Sarai in a local tavern and their sexual connection leads him to believe that he loves her.  But he learns that Sarai is a liar and a thief and when she becomes pregnant he wonders if the child, a boy named Lazarus, is really his. Nathanaël eventually loses contact with Sarai and his son and he becomes a valet in the home of a wealthy politician.  Throughout the story, Nathanaël’s health worsens as he is prone to fits of coughing and fever.  His master sends him to the Frisian islands in the hopes that Nathanaël will regain his strength, but instead he dies alone on this island among the waves of the sea and the nesting, peaceful birds.

Nathanaël’s life is always in flux as the story moves from one interesting episode in this obsure man’s life to the next in rapid succession.  One of the few constants in his life is death and loss.  Death Drives the Cart would certainly be a fitting title for this collection had Yourcenar chosen to keep it.  I don’t think I’ve ever read such a short book with so many death scenes.  But Yourcenar uses this theme to reflect on the value of life, which actually serves to make the book uplifting and even thought provoking.  Even though Nathanaël has endured the brutal hardships of an average, obscure man in the 17th century, every where he turns he encounters the kindness of others.  A dying Jesuit priest, Foy’s parents, a coworker, an employer all demonstrate to him that kindness is not hard to come by in this world.  And Nathanaël himself develops into a kind and compassionate man—he once saves a puppy from being fed to a lion which is a unique example of his good character.  A Lovely Morning, the very short sequel to Nathanaël’s story shows that this kindness is extended to his son who escapes the streets of Amsterdam by being invited by generous strangers to act in a traveling theater group.

As Nathanaël is dying on the Frisian island, he takes stock of his life and decides that overall he has been a good and decent man.  His tolerance for all people, regardless of race or religion, is a perfect example of how we all ought to live and is a timely message of tolerance that counters the violence and disgusting display of bigotry demonstrated by hate groups in my country this weekend.  I will end with an apt quote from Yourcenar that includes some of Nathanaël’s thoughts during the last few hours of his life:

People falsify everything, it seemed to him, in taking such little account of the flexibility and resources of the human being, so like the plant which seeks out the sun or water and nourishes itself fairly well from whatever earth the wind has sown in it.  Custom more than nature seemed to him to dictate the differences we set up between classes of men, the habits and knowledge acquired from infancy, or the various ways of praying to what is called God.  Ages, sexes, or even species seemed to him closer to one another than each generally assumed about the other: child or old man, man or woman, animal or biped who speaks and works with his hands, all come together in the misery and sweetness of existence.