Hans Jürgen von der Wense (1894-1966) was a German composer, poet, aphorist, encyclopedist, avid walker and naturalist. When he died, he left behind in his small apartment in Göttingen over 300 folders containing about 30,000 pages of his letters, poems, photographs and diaries. Wense had intended to write an All-Book which that would be an encyclopedia, arranged alphabetically by keyword, of his aphorisms, translations and interpretations of more than 100 cultures and languages.  He was also working on his Wanderbuch, which would include the lengthy observations and surveys of the landscapes he explored on his impressive daily walks.

A Shelter for Bells is the first time that Wense’s writings have been published in English. The selection offered here by Epidote Press (which is a limited printing of 500 copies), and translated by Kristofor Minta and Herbert Pföstl, is divided into six chapters with broad themes: On Weather and Wandering, On Landscape and Place, On the Celestial, On the Hidden Properties of Things, On Knowing and Being, and On Writing and Language.  But even within each chapter specific ideas forming the themes that were occupying Wense’s mind come forward.  In the chapter On Weather and Wandering,for instance, it is clear that Wense views his daily walks as prayer or meditations; he is keenly affected  by everything he observes in nature around him. The editors alternate between longer passages that appear to be from Wense’s diary and shorter observations, poems or aphorisms that could be from diaries or letters or snippets of poems.   None of the translations are dated or identified so these are my guesses:

Spring: seventeen degrees Celsius. In the cirrus, a burning ring extended around the sun. Crystal, Crystal! I lingered in my bay and beheld it. I went to the heath. A mighty wilderness. Birch and oak. Larks reveled above the moors. Small, black-dappled channels interrupted by naughty frogs. Wide clearings with the lost scent of anemones. Behind it always, the all-silencing sea. I cam to a noisy meadow with shrubs, and each one swayed a white, dew-spittled web, and in each web sat a sleeping spider.

And in the shorter entries, usually just two or three on a page,  Wense is equally as philosophical about his interactions with nature:

I would like best to thrown all books to the side and go out into the wind and there find it all again, the enharmonic changes and tonal cadences of light, the entire landscape a shepherd’s song: Madrigal

I want to walk tomorrow. Wandering is praying. I want to become a human being pure as starlight.

Only that will remain which has the sky as its measure.

Wense’s obsession with walking, however, causes him pain and illness.  He also spends a lot of time in solitude and both the physical ailments and loneliness are oftentimes mentioned throughout the six chapters.

My favorite selections are those included in On Knowing and Being and On Writing and Language.   A page in one of these sections contains only one, powerful sentence:  “The ultimate message is silence,” which struck me in a very personal way.   These chapters are full of equally brief, poignant, thought-provoking aphorisms.  His ideas on poetry are a particular standout:

True Poems have meaning, but not results, for poetry is modulation, and nothing is more poetic than mistaking.

Poems are spells, impenetrable like every core. Poems are prophecies, overheard voices.

Poems are the clouds above language.

The book can be read easily in one sitting, as I did yesterday as soon as it arrived in the post. Or it can be a nice coffee table or bedside book that one dips into every once in a while. This wonderful collection has given me enough of a taste for Wense’s writing to want more.  I am especially hoping that his letters and poems will be translated into English.  Or my daughter is starting high school in the fall and is going to learn German… 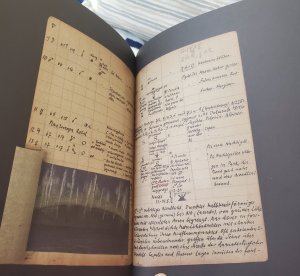 One of the photos included in the book. This is a picture of one of Wense’s notebooks.