My First Encounter with Proust

Charles Swann, the eponymous character of Proust’s first Volume of In Search of Lost Time,  is an old acquaintance of the narrator’s family and, although he has connections to the upper classes and the royals in France and Britian, he never forgets to visit with his middle class friends.  Swann is also very quiet about these other, important social circles to which he has access, and a knowledge of this would have shocked the narrator’s great-aunt:

But if anyone had suggested to my great-aunt that this Swann, who, in his capacity as the son of old M. Swann, was “fully qualified” to be received by any of the “best people,” by the most respected barristers and solicitors of Paris (though he was perhaps a trifle inclined to let this hereditary privilege go by default), had another almost secret existence of a wholly different kind; that when he left our house in Paris, saying that he must go home to bed, he would have no sooner turned the corner than he would stop, retrace is steps, and be off to some salon on whose like no stockbroker or associate of stockbrokers had ever set eyes—that would have seemed to my aunt as extraordinary as, to a woman of wider reading,  the thought of being herself on terms of intimacy with Aristaeus and of learning that after having a chat with her he would plunge deep into the realms of Thetis, into an empire veiled from mortal eyes, in which Virgil depicts him as being received with open arms.

This short passage in Proust brought to mind my very early days as an undergraduate, when taking a Vergil course and being handed these lines from the Georgics and asked to produce a polished translation and commentary.  I carefully and lovingly labored over this Latin text for weeks.  Aristaeus chases Eurydice through a field where she is bitten and killed by a serpent.  Orpheus, in his intense grief, asks the ruler of the Underworld to allow him to bring his wife back, but, by not following the only rule—not to look back at his wife—he is unsuccessful.  As a punishment for his indiscretion Aristaeus’s bees are destroyed and he is allowed to visit his mother and the other nymphs in their underwater lair to get advice on how to resurrect his bees.  I remember the part in which Arisaeus enters this watery realm because there were certain Latin words I keep thinking about and adjusting in my translation.  My mother would call me every week and ask, “How are the bees coming along?”  Although I had studied Latin in high school, I viewed translation as just another acquired skill, but it was due to this Vergil class that I decided to be a classicist.

I have spent the last weekend sitting in my garden, soaking up summer and completely immersed in Proust.  I have no doubt that this experience of summer will be forever linked with my first encounter with Proust’s extraordinary masterpiece.  I had expected something special, but nothing quite like this.  Walter Benjamin, in his essay “The Image of Proust” states it perfectly, “The thirteen volumes of marcel Proust’s À la Recherche du temps perdu are the result of an unconstruable synthesis in which the absorption of a mystic, the art of a prose writer, the verve of a satirist, the erudition of a scholar, and the self-consciousness of a monomaniac have combined in an autobiographical work. It has rightly been said that all great works of literature found a genre or dissolve one—that they are, in other words, special cases.  Among these cases this is one of the most unfathomable.”

One of the most astute and erudite readers I know remarked to me that Proust was a turning point in his reading life—-there is a distinct difference in reading and literature before Proust and after Proust he said.   Even after finishing only the first volume of In Search of Lost Time I think he is absolutely right.

My favorite season in New England is winter.  Most people that I encounter dread the cold and the snow, but I find it relaxing and cozy when I wake up on a day like today and find a winter wonderland outside my window.  My view from every window in the house is one of stark whiteness and yet comfort for me.

The view from my back deck which overlooks a pond.  The pond is frozen over with a pristine coating of powdery snow.

The view from my dining room looking up towards the driveway 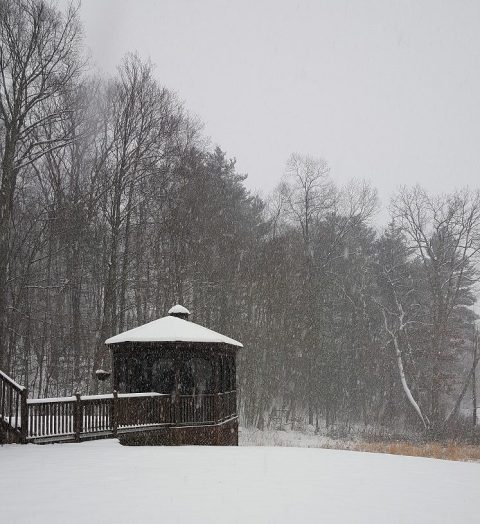 The gazebo covered in a layer of fresh snow.

The view from my kitchen looking out over the snowy woods. 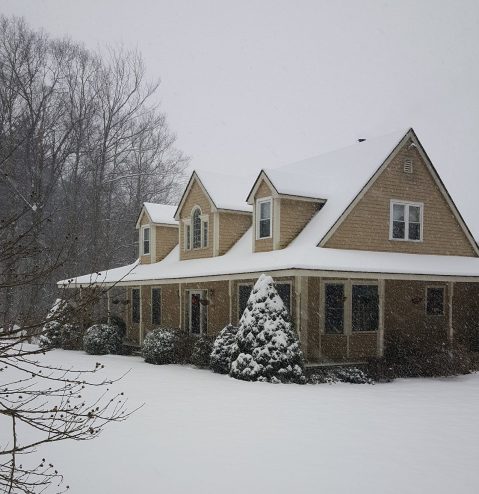 Our Cape Cod style home with the wrap around porch looks best to me with a  fresh dusting of pure, white snow

Vergil’s agricultural poem The Georgics, describes the usefulness of winter for farmers and this passage in particular captures my feelings about winter as a time to slow down, reflect and make time for the little things for which we are usually too busy.  In Georgics 1.299-310 he writes about winter:

…Winter is relaxing for the farmer:
During the period of cold farmers especially enjoy their lot
And they merrily engage in shared feasts with one another.
Friendly winter gives them rest and releases them from cares,
Just as when laden ships finally touch the port
and the happy sailors places garlands on their decks.
But now is the time to strip acorns from the oaks
and berries from the laurel tree and olives and the blood-red myrtle,
Now is time to place down the traps for the cranes and snares for
the stags and to chase the long-eared hares, now is the time to
strike the deer by hurling the hempen thong of a Balearian sling,
when the snow lies deep and when the rivers force along the ice.*

Although I will not be hurling a Balerian sling at deer or gathering acorns, I am taking the time today to enjoy the cozy fire, read some fabulous books, sip my favorite tea and spend time with my family.  When a winter storm is raging outside it provides me with a serene sense of peace and calm like nothing else and it forces me to slow down and enjoy the simple things.

*Translation of the Latin text is my own