The Soul One Must Learn to Know: Tolstoi’s Love Letters 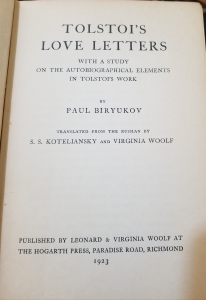 In 1923 The Hogarth Press published a translation of series of love letters that Tolstoi wrote to his first fiancé, Valeria Arsenev.   In the introduction to this collection of missives,  Paul Biryukov explains that, although Tolstoi didn’t mind having these letters published, his wife Sophia objected to having them read by other people until after she died.  Biryukov respectfully and gladly followed Sophia’s wishes.

The letters were written between 1856 and 1857 when Tolstoi was twenty-eight years old and engaged to the daughter of one of his neighbors.  There seems to have been a case of love at first sight between them and many parts of the letters show the author’s deep affection for Valeria.  In a letter dated Nov. 2nd, 1856 he writes:

I already love in you your beauty, but I am only beginning to love in you that which is eternal and ever precious—your heart, your soul.  Beauty one could get to know and fall in love with in one hour and cease to love it as speedily; but the soul one must learn to know.  Believe me, nothing on earth is given without labour, even love, the most beautiful and natural of feelings.  Forgive me this silly comparison: to love as the silly man does is to play a sonata without keeping time, without accents, always with the pedal down, with emotion, thereby giving neither oneself nor others true pleasure.  But in order to give oneself up to the emotion of music, one must first check oneself, labour, work, and, believe me, there is not a delight in life that can be had without work.   But the more difficult the labour and hardship, the higher the reward.  And there is a great work ahead of us—to understand one another and to preserve each other’s love and respect.

Tolstoi decides that he needs to put their love to the test, so he goes off to Petersburg for several months and hopes that, through their letters, they will get to know each other better.   In the same letter he writes:

I guard my feeling as a treasure, because it alone is capable of uniting us firmly in all our views of life, and without this there is no love. I expect our correspondence to do a great deal towards this.  We shall discuss calmly; I shall try to fathom each word of yours, and you will do the same, and I don’t doubt that we shall understand one another.  All the conditions are favourable, and there is feeling and honesty on both sides.  Argue with me, explain, teach me, seek explanations.

This separation is a calculated risk that ultimately fails in part, I think, because his personality is such that he cannot carry on a relationship merely through letters.  He fails miserably at discussing anything “calmly.”  When he doesn’t receive letters back from her he begs her to write and becomes an emotional mess.  He begins to get jealous because of a rumor of her flirting with another man.  In additional he is prone to lecturing her in his letters which she really doesn’t seem to appreciate, to say the least.  And finally he becomes cold and indifferent, or at least feigns these emotions,  because of his anger.  He repeatedly has to apologize for his bad behavior towards her in his letters.  It’s comforting, somehow,  to see that even a great genius like Tolstoi is not immune to Cupid’s arrows.  One of his last letters to her reads:  “You know my nasty, suspicious, changeable character, and God knows if there is anything that could alter it.  Perhaps, strong love which I have never felt and in which I do not believe.  Among all the women whom I have known, I loved and love you best of all, but all this is yet not enough.”

The book credits S.S. Koteliansky and Virginia Woolf as the translators; although she didn’t know Russian, Woolf spent a great deal of time working with the letters to make them accessible to an English speaking audience.  As a result of learning this about Woolf, not only have I been side tracked by reading her essays about Russian literature but I have also been thinking about what a translator’s job entails. Although she was not familiar with Tolstoi’s original language, Woolf’s work with this text justifies her credit as its co-translator.

6 responses to “The Soul One Must Learn to Know: Tolstoi’s Love Letters”