My Pythian Interview with Anne Carson 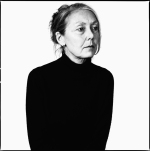 The ancient Greek god Apollo, in addition to being associated with the sun, healing, and music, communicated Zeus’s will through a series of arcane messages at his prophetic shrine in Delphi. Between the seventh and fifth centuries b.c.e., a Greek could visit the Temple of Apollo and participate in the elaborate process involved to pose a personal, religious, or political question or problem to the Pythia, commonly known as the Oracle at Delphi, the priestess of Apollo who delivered the God’s cryptic messages. Her ambiguous responses, written down by the temple priests, were open to interpretation, and often had multiple and even opposing meanings.

As I was interviewing the classicist, poet, and author Anne Carson in June, 2017 via e-mail about her new translation of Bakkhai, the question-and-answer process felt like a consultation with the ancient Pythia. Much like an ancient Greek attempting to get an answer from the priestess of Apollo, I had to go through a few layers—book publicist and agent—and the answers I received back can best be described as intriguing and esoteric; they varied in length from a few words to a paragraph to no response at all. Every reply was also written in all lower case, including the first-person singular “i,” an idiosyncrasy that seemed almost playful, and is something I usually see in the prose or text messages of a student or a younger person. Like a Greek hearing those ambiguous missives given by the Pythia, I was repeatedly surprised by the puzzling, thought-provoking answers I received.

Ann Carson’s newly published translation of Euripides’ The Bakkhai was first staged at the Almeida Theatre in London during the August and September season of 2015 and directed by James Macdonald.  I began my interview by asking Carson how she came to be involved in the production and if she had any role in the staging of the play, and she replied simply, “it was JM’s idea, he commissioned the work from me.  i didn’t interfere in the staging or planning of the production.  i was hired to translate it so that’s what i did.”  The remainder of my questions dealt with the topics and themes explored by Euripides in the The Bakkhai and Carson’s unique style of translation.

The Athenian playwright Euripides wrote The Bakkhai in the last few years of his life, and the play invovles the god Dionysos arriving in Thebes disguised as a mortal to establish his cult there and punish his cousin, King Pentheus, who denies the existence of the god.  Carson points out in her introduction to the translation that, even though Dionysos is considered a young god, he is mentioned in the Linear B tablets found at the Bronze Age site of Pylos, which date as far back at 1600 BCE.  I asked her if Euripides’ version of Dionysos is different from earlier depictions of the god or if it is unusual or orthodox.  Her response expands on her comments about Dionysos in her introduction:

unfortunately there are no earlier depictions of Dionysos in an extant play.  there is an Homeric Hymn but a hymn is a statement of devotion, rather than a story so hard to compare.   but we know the general lineaments of the myth and the interesting and paradoxical thing about Dionysos (which Euripides exploits probably in a unique way)  is that this historically ancient god is perennially depicted as newly arriving everywhere he goes.  in other words he is a god of beginnings:  when you first start to fall in love or get drunk or have an idea—that is the intoxication called Dionysos, new every time.

The Bakkhai continues to be one of the Euripides’s most popular plays to stage, translate, and interpret, even in the 21st century.  Carson believes the reason for its continued popularity is that “it’s really scary.”  I followed up on her response by pointing out that all of Euripides’ plays are scary—Medea, in particular, during which children are murdered—and asked why she thought The Bakkhai is scarier than his other plays.  Carson elaborated on her initial reaction:

i didn’t mean to create a hierarchy of scariness. There is terror in all the plays.  I suppose the interactions of the Bakkhai have an extra edge because of the way the god plays upon the frailties of the king, making one wonder if he is playing upon all our frailties, in our various pursuits of intoxication or ecstasy.

Carson has translated Euripides’s plays before, and in her introduction to her translation of Hekabe she describes how she keeps a file on her computer entitled “Unpleasantness of Euripides.”  When I asked her what she has recorded in her document about The Bakkhai she said, not surprisingly, “That is a secret.”  But this drama has a lot of unpleasant, disturbing moments, including Pentheus’s murder at the hands of his own mother.  (Pentheus is tricked by Dionysus into dressing up as a woman and spying on the maenads, the female followers of the god, and is killed by these women, among whom is the king’s own mother.)

Scholars have debated for decades about what moral lesson or message Euripides intended to convey in his play.  Is Pentheus’s punishment deserved or is Dionysos unnecessarily harsh and vengeful?  Theories have ranged widely, from a claim that the drama mirrors a deathbed conversion of a poet who had previously rejected the pantheon of gods to an assertion that it is a commentary on religious fanaticism.  In an essay entitled, “Tragedy: A Curious Art Form,” Carson states about Euripides’ dramas: “There is in Euripides some kind of learning that is always at the boiling point.  It breaks experiences open and they waste themselves, run through your fingers.” During our interview, however, she did not wish to provide an opinion about the possible moral implications or lessons in The Bakkhai:

Beck:  What message, if any, do you see in The Bakkhai?

Carson:  works of art don’t have “a message,” do they? they offer an experience and possibly a transformation.

Beck:  What do you think is the central moral issue in The Bakkhai?  Is this another revenge play like Hekabe?

Carson:  here you are trying to reduce to a “message.”

Beck: Is Pentheus worthy of sympathy?

As is fitting for one of Euripides’s most mysterious plays, Carson’s rendering is unconventional.  Particularly humorous is Carson’s translation of a scene that involves Teiresias and Kadmos dressed in woman’s clothing, as they plan a trip to the mountain where the Maenads are engaging in their mysterious rites and revelries. In Carson’s version Kadmos proclaims: “We must get to the mountain.  Should we call a cab?”  When I asked Carson if the humor in this passage was her own interpolation or if she thinks that Euripides is funny, she insisted that “the humor is entirely Euripides.”

I asked a few more questions about her process of translation and her experience with Euripides’ text:

Carson:  i don’t think i have any idea of my own voice.  perhaps this is a question for a reader to answer?

Beck:  You’ve never thought about a particular authorial voice, but what is guiding your choices as a translator?

Carson:  it depends on the commission.  an academic text has different requirements than a production for the stage and a comic book would be different again.

Beck: As you were translating The Bakkhai, what linguistic, metrical or poetic differences did you notice in the ancient Greek text that Euripides uses when he is depicting different characters? How did you account for these differences in English?

Carson: i’m not sure what you’re asking here.  Euripides uses iambic trimeter for the dialogue portions of the play and lyric meters in the choral odes.   the odes are intended to be sung and danced so they function at a different level of poeticality and thought than the dialogue portions.  in translating the odes i often shape the text on the page to indicate this lyric difference.  and hope it helps the performer shape their voice accordingly.

Beck: I am curious about your translation of theos as “daimon” instead of “god.”  Can you describe the process by which you came to this translation?  Did you have a particular use of this word in another ancient source in mind when you were thinking of using “daimon”?

(No response was sent by Carson to this question.)

The word daimon is an interesting word in ancient Greek and Euripides calls Dionysos a theos (god) or daimon interchangeably throughout the drama.  Liz Scafer, in her review of the staged production of the play, describes a note placed in the program so that audience members could get a better understanding of this enigmatic word: “Anne Carson’s witty version of Euripides’ play has Dionysos helpfully suggest that the audience think of him as a daimon (explained in the programme with a quotation from an old-time classical scholar as an “occult power, a force that drives man [sic] forward where no agent can be named’).”

Carson, in a Cahier entitled Nay Rather that was written for the series that is published by Sylph Editions, argues that a type of metaphysical silence happens when it is impossible to translate a word directly from one language to another.  Carson’s example of this is taken from the word molu which appears in Homer’s Odyssey.  Molu is a plant that is sacred to the gods, and Hermes gives this plant to Odysseus in order to protect himself from the magic of Circe.  Carson says about Homer’s use of this word and the intentional silence it engenders: “He wants this word to fall silent.  Here are four letters of the alphabet, you can pronounce them but you cannot define, possess, or make use of them.  You cannot search for this plant by the roadside or google it and find out where to buy some. The plant is sacred, the knowledge belongs to the gods, the word stops itself.”

I was so intrigued by her non-translation of the word daimon as another example of this metaphysical silence, that I (stupidly? naively?) tried one final time to ask about her thought-process and selections for The Bakkhai:

Beck:  You’ve written about words that resist translation, that are untranslatable, using molu in Homer as an example.  Did you encounter any such words in The Bakkhai that are similarly untranslatable?

Carson: many, but in what language could i describe them to you?

What an apt and cryptic concluding response to this rather Pythian interview.

John Collier. The Priestess of Delphi. Oil on Canvas. 1891.