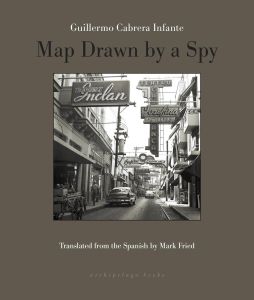 The following is an introduction to a review that I have contributed to the latest edition of The Scofield.  The theme of this issue is Kobo Abe & Home; the link to the issue that includes my full review is below:

In the aftermath of Fidel Castro’s death, the publication of Cuban writer Guillermo Cabrera Infante’s Map Drawn by a Spy is a timely reminder of the complicated history of the author’s island homeland. While serving as a cultural attaché in the Cuban embassy in Belgium in 1965, the author’s mother dies and Cabrera Infante flies back to Cuba for her funeral services. He is only supposed to be in Cuba for a week; however, when prohibited by authorities from boarding his plane back to Belgium, he is forced to confront a native country he no longer recognizes. Map Drawn by a Spy, Cabrera Infante’s autobiographical account of this forced stay before final exile, candidly reveals a decaying of the old, prosperous Cuba and its way of life, as well as the people’s growing disillusionment with the Revolution of 1959.

Cabrera Infante was born in Gibara, Cuba in 1929 and moved with his impoverished family to the capital city of Havana in 1941. In addition to being a novelist, short story writer, essayist, and journalist, he was also a film critic who wrote under the pseudonym of G. Caín. In 1952, when he published a short story containing English-language profanities, he was arrested and fined by the Batista regime. His parents were two of the original members of the Cuban Communist party and, along with his family, he supported the revolution that launched Fidel Castro into power. But he soon became disillusioned with the new socialist government that shut down Lunes de Revolución, the weekly literary magazine which he founded and edited. His position as a diplomat in the Cuban embassy was an attempt by the authorities to send him into exile. Published in 1965, his novel Three Trapped Tigers, favorably compared to James Joyce’s Ulysses, earned him international attention. It has been speculated that both his political stance against the government, as well as his literary success, caused him to fall out of favor with the Cuban authorities. In 1965 he fled from Cuba to Madrid and later settled permanently in London, where he died in 2005. Cabrera Infante never returned to his home in Havana, but he remained a stanch and outspoken critic of Fidel Castro until his death.

Map Drawn by a Spy was found among the author’s papers after his death in 2005, so this version of his story was never subjected to Infante’s edits or corrections. Indeed, the accounts of his meandering daily activities within confinement often feel as if they are written spontaneously, without any literary premeditation.

Continue reading my review and see the rest of this issue here:   http://thescofield.com/

5 responses to “You Can’t Go Home Again: Map Drawn by a Spy by Guillermo Cabrera Infante”