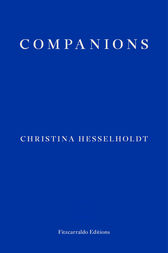 In her narrative that follows the lives of five close friends living through the trials and tribulations of middle age in the 21st century, Hesselholdt includes a conflated translation of two of the most famous poems by the Roman poet, Catullus: “My girl’s sparrow is dead…It would not leave her lap, but hopped around now here now there…He chirped constantly to his mistress alone.”  The poet engages in a passionate, tumultuous love affair with a married,  Patrician woman named Clodia (disguised as Lesbia in his poetry) and in Poem #2 he writes about his lover’s sparrow with whom she enjoys playing and teasing. (The poem is commonly view as an erotic metaphor—Lesbia plays with her “bird” when she is missing her poet-boyfriend, Catullus.)  The tone of Poem #3 changes dramatically as Clodia’s sparrow has now died and Catullus’s words serve as a mock eulogy for the dearly departed little pet.  The death of the sparrow is also foreboding, it shows Catullus’s angst about his relationship with this woman whom he knows, on some level, will bring him grief and suffering.  It is his friends, his companions (as he calls them in Poem #11—comites in the Latin ) that he relies on to get him through the rough times.

Much like Catullus, the characters in Companions struggle with loneliness and isolation in their love lives but their friendships are something to which they cling for security and reassurance amidst their various crises.  Hesselholdt’s narrative explores different types of love—romantic, filial, platonic—and the existential angst that these emotions cause.  Time and again the theme of death is considered in the author’s fragmented, intertextual, and postmodern writing.  Forty-year-old Camilla is the central figure in the narrative—or her thoughts, at least, get the most attention.  She is married to Charles who suffers from chronic, debilitating back pain and his illness has put a strain on their relationship.  Camilla’s mother is also troubled by various afflictions, both mental and physical, which are a constant source of stress for Camilla.  In addition, her dear, depressed friend Edward lives alone with his dog in the house in which his parents committed suicide by hanging themselves.  Camilla is surrounded by weakness, illness, and sadness and her thoughts are often about mortality— that of her own and those around her.

Early in the novel Camilla takes a trip to Belgrade to give a lecture and loneliness and isolation weigh on her.  Her thoughts apply to her trip as well as her current state of mind at this point in her life:

Why does the journey reinforce this existential loneliness—never am I closer to death and the abyss than when I am alone on a journey.  I know the answer already.  An unknown among unknown faces.  And unknown, unmemorized stretches.  Kingdom of the dead, glittering, indistinct features, averted eyes, withdrawal, fleeting shadows, bloodlessness.

When she is back home interactions with her mother and her husband also evoke images of death.  She says about her mother:

The other day I saw a painting by Kiefer, a painting of an enormous sunflower at the foot of which, a man is keeled over, (the title of the painting is Sol Invictus) I thought, that was how it was to be a child of hers.  The sunflower head looked like a shower head.  One moment warmth, the next in danger of drowning.  I am the one who is keeled over at the foot of the flower.  I have died the sun death, I have died the flower death.

She says about Charles and their relationship:

Married life with Charles is linked to the Osama bin Laden era, we were so in love in September 2001 that it was not until late morning on the twelfth that we realized what had happened on the eleventh, and the dissolution of our relationship took place in the days around bin Laden’s death.  Two images frame it:
1. Bodies in Free fall
2. A face shot to pieces
The end of him. And us.

And other intermittent thoughts that Camilla has that threaten to consume her and pull her down into the abyss:

I need to keep my mind active, give it something to work on, just like you use prayer beads or knitting needles to prevent your hands from becoming pendulums that heavily and resignedly pull the body down or on the contrary swing into the air or rub and pick and chewing gum for the mouth, otherwise it (the mind) fiddles with catastrophes like the outcome of which always results in coffins or in any case deathbeds or farewell letters, immensely trivial, but for that reason no less troublesome.

Camilla describes Alma, her life-long, closest friend as blonde, “my GPS, my light in the darkness.”  It is Alma that shows up in Belgrade to help her navigate the city and it is Alma who is a comforting presence throughout her childhood while she is dealing with her mother’s various issues.  Edward, Kristian and Alwilda are also close companions that provide her with support and distraction and we get their points-of-view from time to the in the text as well; they themselves are dealing with the ups and downs of various relationships.  But it is Alma who is the companion that is her constant source of solace.  They are friends from childhood and there are, fittingly, many descriptions of their traveling adventures–from England to Belgrade to Greece.

Companions is laden with references to other authors and pieces of literature; Woolf, Plath, Bernhard, Nabokov, and even a quote from Epicurus can be found within the pages of Hesselholdt’s narrative.  I had wondered if the character of Camilla is in any way autobiographical as it is evident that the author inserts her own literary preferences into the text.  Hesselholdt has especially tempted me to read Woolf’s The Waves and Durrell’s The Alexandria Quartet before I return to Companions for a second read as her multilayered and nuanced book is worthy of, and in fact demands, more than one reading.  The author, in discussing Durrell’s novels through the thoughts of Camilla, subtly shows us how we ought to approach and read Companions:  “The existence of the absolute unique frame of reference is rejected; all depending on where the events in the books are seen from, they appear different.”

I apologize for my scattered thoughts about this book.  I found it overwhelming to think about.  Please visit Times Flow Stemmed for Anthony’s more coherent and enlightening ideas about this book: https://timesflowstemmed.com/2017/10/23/christina-hesselholdts-companions/

10 responses to “Comites Camillae: Some thoughts on Companions by Christina Hesselholdt”