Review: I’ll Sell You a Dog by Juan Pablo Villalobos

I am so excited to be participating in Spanish Lit Month again this year hosted by Stu at Winston’s Dad and Richard at Caravana de Recuerdos.  My first contribution this year is a fantastic read from And Other Stories. 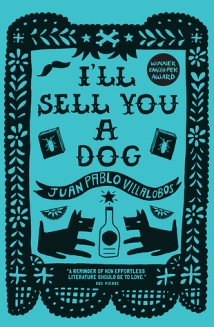 This book is set in an apartment building in Mexico City in which a group of elderly retirees live.  The residents of the building engage in various activities together in order to fend off boredom, including the most popular activity which is the daily gathering and discussion at the literary salon.  Francesca, the building president and leader, is also the head of this salon.  As each new member moves into the building, he or she is given a warm welcome and an invitation to the salon.  The only person who has ever dared to turn down an invitation to the salon is our witty, clever and crabby narrator, a man who goes by the name of Teo.

When Teo moves into the building hilarity ensues because he is not quite so willing to conform to all of the rules set forth by Francesca and her fellow tenants.  Teo also drinks too much and has some interesting visitors over to his apartment, including a Mormon missionary who is constantly trying to preach the Word of the Lord to Teo.  Teo’s days also include frequent visits to the local pub for several beers and visits to the greengrocer where he discusses life and politics over more beers with Juliet the proprietor.  He also spends quite a bit of time recording his thoughts in a notebook and because of this the salon thinks that he is writing a novel.  They seem to know everything that he writes in his journal and he can’t figure out how they are reading his personal thoughts.

The story also flashes back to Teo’s earlier days and we get some background on this roguish, alcoholic, funny old man.  Teo mostly grew up with his mother and his sister and lived with them until he was in his fifties.  Important events in his younger years were oftentimes brought about by the dog his mother happened to dragged home at the time.  The original family dog caused the unraveling of his parents’ marriage and his father moving out.  Like his father before him, Teo fancied himself an artist and when he was younger he attended art school for a year to try and cultivate his talents.  But this all came to an end when the family dog was diagnosed with marijuana poisoning which resulted in his mother finding out what he was really doing with his fellow students.

After his mother forces him to give up attending art school, Teo gets a job with his uncle at his local taco stand which is a very lucrative business.  It is also due to dogs that Teo becomes a local legend with his “Gringo Tacos.”  I did find the story lines with the family dogs rather funny but those who are sensitive might need a warning that the fate of dogs in this book is never good.  All sorts of local politicians and arts patronize his taco stand and have intriguing discussions about art with this astute taco seller.  Teo’s favorite book is Adorno’s Aesthetic Theory and later in the retirement home he uses his cherished copy of this book to fend off the cockroaches.

The fight between Teo and the members of the literary salon reach a fever pitch when they get their hands on and hide his cherished copy of Aesthetic Theory and he,  in turn, steals their copies of In Search of Lost Time.  This is no small feat for Teo because Proust’s masterpiece weighs a ton.  In the end Francesca has to blackmail Teo into returning the salon’s books and the scandalous information that she has on him involves, of course, a dog.

This is one of the funniest books I have read so far this year. It is cleverly written and has characters that manage to be silly but endearing at the same time.   I look forward to reading more of Villalobos’ books.  What is everyone else reading for Spanish Lit Month?

Juan Pablo Villalobos was born in Guadalajara, Mexico, in 1973. His first novel, Down the Rabbit Hole, was the first translation to be shortlisted for the Guardian First Book Award (in 2011). He writes regularly for publications including Granta and translated Rodrigo de Souza Leão’s novel All Dogs are Blue (also published by And Other Stories) into Spanish. His work has been translated into fifteen languages. He lives in Barcelona and has two children.

11 responses to “Review: I’ll Sell You a Dog by Juan Pablo Villalobos”