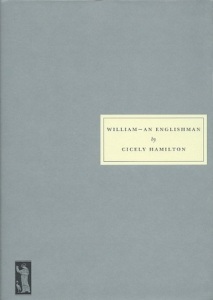 I was not surprised to find out the author composed this novel in a tent on the front lines of World War I.  The novel is a gruesome, starkly honest portrayal of the horrors of war.  The author, however, draws the readers in at first with a light and satirical description of its gentle, naïve and optimistic main characters, William and Griselda.

When the story begins, William is twenty-six years old and still lives with his mother.  He has an extremely ordered and monotonous life working at a clerk’s office and handing over most of his weekly paycheck to his mother.  He doesn’t seem to have any genuine affection for his parent and when she suddenly dies he realizes that he never really loved her.  Her death means freedom for him; not only does he now have financial freedom since she left him a sizeable inheritance but he also has the freedom to make his own decisions about the course his life will take.

William asks some advice from one of his fellow clerks about what he should do with his time and money and it is through this interaction with Farraday that William becomes involved with political and social reform.  William leaves the tedious office where he has worked for many years and embarks on full-time career as a social activist who writes about, protests and goes to meetings about the suffragette movement, pacifism, and other socialist topics.

It is at these meetings that William meets Griselda, a feisty suffragette who shares the same ideals as William.  The tone in the book that describes these two is one of gentle parody as William and Griselda appear to fight for mostly vague causes.  They believe all government is evil and any attempt of a government to raise a military and train it is simply “playing” at warfare.  They love to go to meetings and hand out pamphlets and consider themselves strong and tough for fighting against social injustices.  They see themselves as the perfect couple and their courtship and devotion to each other is a sweet love story.

When William and Griselda take their honeymoon in the remote mountains of the Belgian Ardennes, they are uneasy with the slow-paced, quiet life of the village in which they are staying. But they settle in for a few weeks and enjoy each other’s company.  It is on the very last day of their vacation that things take a horrible and tragic turn for the worst.  They encounter a regiment of invading German soldiers who treat them brutally and inhumanely.  I have to say that the violence in this book shocked me and Hamilton does not gloss over or sugarcoat the atrocities of war.

William, the once naïve and optimistic Englishman who lived in his happy little bubble of bliss, now becomes the disillusioned and distraught victim of real warfare.  It is not a game or a joke when men are being blown apart and people’s lives are destroyed by gunfire and bombs.  I don’t want to give away the plot and the fate of William and Griselda.  But I will say that William’s story comes full circle and in the end his life becomes equally as monotonous and numb as it was when we first meet him living under the thumb of his mother.  What starts out as an amusing story about two naïve lovebirds becomes a harsh commentary on the gory realities of warfare.

I encourage anyone who enjoys World War I historical fiction to pick up this book.  Thanks to Persephone Press for reissuing another brilliant book from an important 20th century female author.

She is best remembered for her plays which often included feminist themes. Hamilton’s World War I novel “William – An Englishman” was reprinted by Persephone Books in 1999.

She was a friend of EM Delafield and was portrayed as Emma Hay in “A Provincial Lady Goes Further.”

6 responses to “Review: William – an Englishman by Cicely Hamilton”