This is my third contribution to German Literature Month.  This has been such a fun event with so many bloggers reviewing great German books.  To see a complete list go to the #GermanLitMonth hash tag on Twitter.  This title was originally published in German in 2010 and this version is translated into English by Donal McLaughlin. 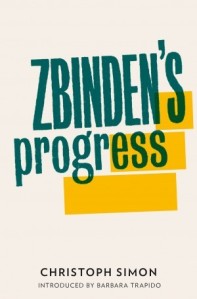 Lukas Zbinden lives in a nursing home in Germany and even though he isn’t as fast as he used to be, one of his favorite activities is still taking his daily walk.  Most of the book entails Lukas taking walks with Kazim, one of the newly-hired caretakers at the home.  On their walks Lukas describes to Kazim the other inhabitants of the home, Lukas’ former life before the nursing home, and Lukas’ philosophical musings on the importance of walking.

Lukas and his deceased wife, Emilie, have one son named Markus and much of Lukas’ story deals with his son and his inability to connect with Markus even as an adult.  Markus is a chemist and when Lukas asks him about his work and his lab Markus’ answers are short and nondescript.  Lukas stretches his memory back to Markus’ childhood during which Emilie did most of the parental nurturing.  But Lukas was by no means a distant father; he oftentimes tries to get involved in his son’s life, such as the time he tries to console Markus after his first love breaks his heart.  For whatever reason, Lukas and Markus are never able to connect on a deeper, emotional level.

Lukas had a long and successful career as a teacher and his stories about his students and his various jobs are very funny.  After an episode in which his wife tells him to be quiet, she even slaps him to get her point across, Lukas decides to be completely silent in his classroom.  The situation that unfolds is at first uncomfortable as the students can’t decide what is going on with Herr Zbinden.  But as they try to take control of the learning environment themselves, chaos ensues.  Lukas has to break his silence to stop the fighting and excessive swearing of his out-of-control students.

One of the things I liked most about Lukas is his ability to talk to and make friends with anyone.  He even tries to reach out to and chat with the more reticent and crabby members of the nursing home.  He makes friends with all sorts of people on his daily walks.  There is not very much substance to the plot of this book, but instead it is one of those stories that is driven by a single, strong and heartwarming character.  It was a pleasure to accompany Herr Zbinden on his literal walk down the stairs of the nursing home and his metaphorical walk through the memories of his full and rich life.

Christoph Simon was born in 1972 in Emmental, Switzerland. After travels through the Middle East, Poland, South America, London and New York, he has settled in Bern. His first novel, Franz, or Why Antelopes Run in Herds (2001) has sold over 10,000 copies, while Planet Obrist (2005) was nominated for the Ingeborg Bachmann Prize. Zbinden’s Progress is his fourth novel and won the 2010 Bern Literature Prize.

Tagged as And Other Stories, German Literature, Literature in Translation