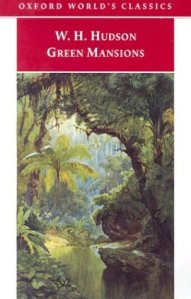 Last week I was in one of those moods where I just couldn’t decide what I wanted to read.  I tried a couple of books that just weren’t working for me and then I finally settled onto this oftentimes neglected classic by William Henry Hudson.

Hudson was not only an author, but he was also a naturalist and wrote extensively about the flora and fauna of his homeland in Argentina.  So it is no wonder that the most striking aspects of this novel are the descriptions of the lush landscapes in which the main characters live.

The contrast between the “savages” and civilized man is an interesting topic that Hudson explores.   Abel is escaping from his civilized country in which his government is constantly being threatened by coups and rebels.  He takes refuge in the lush, tropical forests of south-western Venezuela which are inhabited by unorganized tribes of Indians.  Abel finds that life among the Indians is much simpler than life in the city; the focus of these people is gathering food, building shelters and protecting themselves from their enemies.  Abel describes the lavish rainforests in which he lives among these people as his “green mansions.”

Abel learns that even among these tribes superstitions, prejudices and hatred exist.  The Indians with which he settles put him through a series of tests to see if Abel can be trusted and accepted into their community.  Abel is eventually given his own hammock on which to sleep in one of their huts and he is invited to take his share from the communal eating pot.  But Abel is restless sitting in his hammock all day, so he explores in a local wooded area where he meets a mysterious woman named Rima.

When he first explores this forest, Abel hears what he thinks are warbling bird sounds.  The sounds seem to follow him no matter where he goes in the woods.  Eventually he stumbles across a woman who looks and acts like no other native he has encountered.  She is at peace with nature and lives among the animals in harmony; the animals and insects seem to obey and respect her and even a poisonous snake which bites Abel wraps itself around Rima as her protector.  Abel gradually falls in love with Rima and wants nothing more than to act like lovers do with embraces and kisses and sharing and conversation.  But Rima is elusive and even though she is around Abel she doesn’t let him see her or touch her very often.  It appears that she is also in love with Abel, but she doesn’t understand the concept of love and so she is afraid of her feelings and shrinks from Abel’s advances.

In the end Abel must find a way to teach Rima what love is and show her how to express it.  Abel must also protect Rima from the other natives of the forest who view Rima, because of her difference in appearance, as a threat to them.  And although the book ends on a tragic note, the descriptive passages of the fertile rainforest, the ideas about love and Abel’s enduring will to live all make this a great classic.

William Henry Hudson was an author, naturalist and ornithologist. He was born in the Quilmes Partido in Buenos Aires Province, Argentina, where he is considered to belong to the national literature as Guillermo Enrique Hudson, the Spanish version of his name. He spent his youth studying the local flora and fauna and observing both natural and human dramas on what was then a lawless frontier, publishing his ornithological work in Proceedings of the Royal Zoological Society, initially in an English mingled with Spanish idioms. He settled in England during 1869. He produced a series of ornithological studies, including Argentine Ornithology (1888-1899) and British Birds (1895), and later achieved fame with his books on the English countryside, including Hampshire Days (1903), Afoot in England (1909) and A Shepherd’s Life (1910). His best known novel is Green Mansions (1904), and his best known non-fiction is Far Away and Long Ago (1918). His other works include: The Purple Land (That England Lost) (1885), A Crystal Age (1887), The Naturalist in La Plata (1892), A Little Boy Lost (1905), Birds in Town and Village (1919), Dead Man’s Plack and an Old Thorn (1920), and A Traveller in Little Things (1921).