Review: The Making of a Marchioness Parts l and ll by Frances Hodgson Burnett 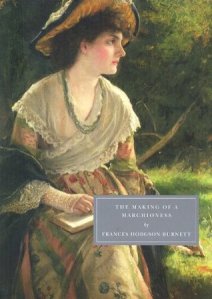 This is a simple yet sweet story of one woman who is saved from her dreary life by a British Lord.  Emily Fox-Seton was brought up in an aristocrat family in late 19th century England, but when both of her parents die and she is left penniless she is forced to make her own way in the world.  But Emily never, even for a minute, laments her fortune, or lack thereof, in life.  She rents a room from two kind ladies in a boarding house and she makes her living by running errands and doing odd jobs for British aristocrats.  It is an invitation from one such aristocrat, Lady Maria Bayne, that changes the course of her entire life.

At Lady Maria Bayne’s country estate, to which she is invited for a summer vacation, Emily is put to work by this selfish upper class woman.  Among Lady Maria’s guests are a plethora of silly young ladies who are each in need of a rich husband.  The most eligible bachelor present is Lord Walderhurst, a widower in his fifties whose aloof attitude leads us to believe that the last thing he wants or needs is a wife.  But the ingenuous nature of Emily catches his eye and he sweeps her off of her feet by asking her to be Lady Walderhurst.

The second part of the story deals with Emily’s adoration of her new husband and Lord Walderhurst’s growing appreciation and affection for his wife.  The marriage really seems to work for both of them and it is disappointing when Lord Walderhurst takes his leave of her for and extended business trip to India.  This part of the story is a bit ridiculous and melodramatic as the Lord’s heir, Alec Osbourn, tries to kill Emily and make it look like an accident.  Alec is a lazy drunk who, up until Lord Walderhurst’s marriage, assumes he will take over the Walderhurst title and money very soon.  He sees Emily as the only obstacle in his way of gaining an easy fortune.  Emily deals with the Osbourns in the same calm, stoic and intelligent way that she has handled all obstacles in her life.

THE MAKING OF A MARCIONESS is another delightful read from Persephone Books that I highly recommend.

Frances Eliza Hodgson was the daughter of ironmonger Edwin Hodgson, who died three years after her birth, and his wife Eliza Boond. She was educated at The Select Seminary for Young Ladies and Gentleman until the age of fifteen, at which point the family ironmongery, then being run by her mother, failed, and the family emigrated to Knoxville, Tennessee. Here Hodgson began to write, in order to supplement the family income, assuming full responsibility for the family upon the death of her mother, in 1870. In 1872 she married Dr. Swan Burnett, with whom she had two sons, Lionel and Vivian. The marriage was dissolved in 1898, and Burnett was briefly remarried, to actor Stephen Townsend. That marriage too, ended in divorce. Following her great success as a novelist, playwright, and children’s author, Burnett maintained homes in both England and America, traveling back and forth quite frequently. She died in her Long Island, New York home, in 1924.

Primarily remembered today for her trio of classic children’s novels – Little Lord Fauntleroy (1886), A Little Princess (1905), and The Secret Garden (1911) – Burnett was also a popular adult novelist, in her own day, publishing romantic stories such as The Making of a Marchioness (1901) for older readers.

4 responses to “Review: The Making of a Marchioness Parts l and ll by Frances Hodgson Burnett”