Review: Our Souls at Night by Kent Haruf

Knopf did not let me have access to this title when I requested it on Edelweiss. Sometimes bloggers do get rejected when they request review copies. But this book piqued my interest enough for me to buy it on my own anyway.  As always, this is my honest review. 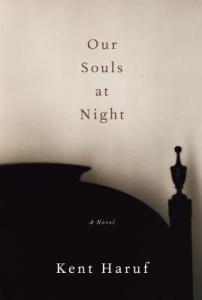 This title is a brief yet beautiful read that took me by surprise.  Addie, a septuagenarian who has been widowed for years, walks over to her neighbor Louis and makes a proposition to him.  Since he also lives alone, Addie wants him to come over to her house at night and sleep with her and talk to her in the dark.  But there is nothing sexual or indecent about her suggestion.  She is lonely at night and instead of taking sleeping pills Addie would rather have a companion to talk to in the dark to help lull her to sleep.

Addie and Louis are awkward at first in a very sweet and gentle way.  They talk in the dark about their respective deceased spouses.  They slowly get to know intimate details about each other’s past lives.  Eventually they start holding hands as they communicate in the dark.

The small town in Colorado in which Addie and Louis live start to gossip about the pair because people see Louis walking over to Addie’s house every night.  The stance that they take, Addie in particular, against the nosy neighbors is that they don’t care what other people think anymore.  Addie and Louis are happier spending time with one another than they have ever been in their lives and they are no longer lonely.  However, will Addie and Louis also be able to dismiss the opinions of their grown children who also get wind of their “relationship” and don’t approve of it?

Addie’s grandson, Jamie, also comes to spend the summer with Addie and Louis.  Jamie’s parents are in the middle of a separation and poor Jamie has been cast off to live with his grandmother for the summer; when Jamie is dropped off at Addie’s home is upset and lonely.  Addie and Louis gradually establish a routine with the boy, shower him with love and attention, and adopt a shelter dog for him.  Addie, Louis, Jamie, and Bonney the dog have a wonderful summer and all four of them find comfort and solace in their little group.

OUR SOULS AT NIGHT packs a lot of though-provoking messages into one small book: it’s never to late in life to make connections and establish relationships, we can find happiness is simple things like conversations, and we really shouldn’t care what other people think of us if what we are doing makes us happy.  I highly recommend you put this book on your “To Read” pile for the summer.

Kent Haruf was born in eastern Colorado. He received his Bachelors of Arts in literature from Nebraska Wesleyan University in 1965 and his Masters of Fine Arts from the Iowa Writers’ Workshop at the University of Iowa in 1973. For two years, he taught English in Turkey with the Peace Corps and his other jobs have included a chicken farm in Colorado, a construction site in Wyoming, a rehabilitation hospital in Colorado, a hospital in Arizona, a library in Iowa, an alternative high school in Wisconsin, and universities in Nebraska and Illinois.

Haruf is the author of Plainsong, which received the Mountains and Plains Booksellers Award, the Los Angeles Times Book Prize, the Maria Thomas Award in Fiction, and The New Yorker Book Award. Plainsong was also a finalist for the 1999 National Book Award. His novel, The Tie That Binds, received a Whiting Foundation Award and a special citation from the Pen/Hemingway Foundation. In 2006, Haruf was awarded the Dos Passos Prize for Literature.

All of his novels are set in the fictional town of Holt, Colorado. Holt is loosely based on Yuma, Colorado, an early residence of Haruf in the 1980s.

Haruf lived with his wife, Cathy, in Salida, Colorado, with their three daughters. He died of cancer on November 30, 2014

6 responses to “Review: Our Souls at Night by Kent Haruf”