It’s been a while since I have read an historical novel, so I jumped at the chance to read and review

A Triple Knot when it was offered by Blogging for Books.  This site has a huge selection of titles in all different genres and they will give you a free book in exchange for an honest review.  Check out their site if you are a blogger or want to start a blog and get some free books.

Now for my review of A Triple Knot: 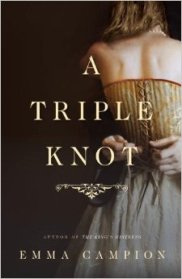 Joan of Kent, like many medieval noble women, has very little choice about whom she marries.  Since her cousin is King Edward III of England, he wants to marry her off to Arnaud Amanieu in order to form a political alliance for the crown.  When Arnaud’s father turns out to be a scheming ladies’ man who makes inappropriate advances towards his future daughter-in-law, the betrothal is called off.

Joan does fall in love with one of the king’s knights, a man named Thomas Holland.  She secretly marries Thomas but while he is away waging battles on behalf of the King, her family forces her to marry another nobleman named William Montagu. Despite the fact that she is compelled to marry someone else, the love and devotion that Joan has for Thomas never waivers.  Much of the book deals with their struggles to be together as man and wife.

Throughout all of her trials and tribulations, Joan must also deal with the advances of her cousin Ned who is the Prince of Wales and next in line to succeed his father Edward III.   Ned pledges his love for Joan at a very early age and vows to make her his queen.  Ned is constantly a sinister presences who keeps insinuating himself into Joan’s already complicated life.

The first half of this book was difficult for me to get through.  I found it predictable and some of the descriptions of court life rather lengthy and unnecessary.  I have to admit that at one point I was actually tempted to abandon the book.  But I pressed on with it and found that the second half of the book was more enjoyable.  By that point the characters were better developed and I became more curious about their fates.

This historical fiction is not for everyone. If you have a deep interest in 14th Century England and the story of Joan of Kent then I would recommend giving A TRIPLE KNOT a try.