The acclaimed author of The Borrower returns with a dazzlingly original, mordantly witty novel about the secrets of an old-money family and their turn-of-the-century estate, Laurelfield. 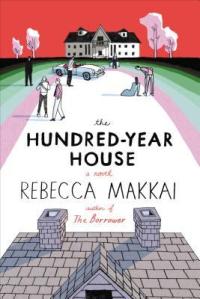 The Devohr family mansion in the Midwest, which in 2000 is celebrating its 100th birthday, has a rich and haunted history.  The unique setup of this novel traces the history of Laurelfield Estate beginning in 1999 and working back to 1900.  The first part of the book centers around Doug and his wife Zee who are living in the coach house of the Devohr mansion.  I found this to be the most humorous part of the book as it approaches being an academic satire.  Zee works as a professor at the local university and Doug is trying to write a manuscript about an obscure poet, Edward Parfitt, so that he too can get a job in academia.  While Doug is trying to get a handle on his writing he develops a connection with Miriam, a quirky artist who is also sharing the coach house.

The second part of the book deals with Grace Devohr and her abusive, playboy husband George who come to live in the house after their marriage in 1954.  At this point the tone of the story changes to one that is sad and tragic.  Some of the mysteries of the house and its inhabitants that are brought up in part one are solved in this second part.  It is very unique that an author can seamlessly combine such different tones as satire and tragedy such as Rebecca Makkai does in this novel.

The third part of the book describes the artist colony which the house is turned into during a 25 year period beginning in 1929.  The artists are a mixture of interesting personalities who can be somewhat mischievous.  When Gamby Devohr threatens to shut down the colony, the artists ban together and cleverly “convince” Gamby to keep the colony open for at least another 25 years.  The author really displays her writing talent in this chapter as well when some of the narrative takes the form of letters and notes.

The final part of the book is the briefest and describes Augustus Devohr and his reasons for building the house for his wife Violet in the first place. It is Violet’s soul that is said to haunt the house.  Although the initial construction of the house is not fortuitous, we know from the unique structure of the book that later generations will have a happy ending in the house.

The Hundred Year House in a unique combination of both literary fiction and historical fiction. This is one of those rare books that has something for everyone.  If you like a little mystery, some romance or a touch of tragedy then I highly recommend The Hundred Year House.

One response to “Review: The Hundred Year House by Rebecca Makkai”