John Galbraith Simmons and Jocelyne Geneviève Barque: An Interview with Translators of Sade 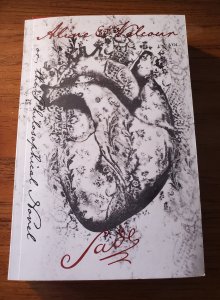 Aline & Valcour is an epistolary novel written by Marquis de Sade in 1786 while he was locked in the Bastille. Contra Mundum Press has, wisely, decided to break up the novel into three volumes which are beautifully and expertly translated by the husband and wife team of John Galbraith Simmons and Jocelyne Geneviève Barque. I had the pleasure of interviewing them about their translation and their process as a team via email in February 2020.

1. You both have very interesting and different backgrounds as far as your careers are concerned. Can you describe how you came to the decision of translating Sade’s Aline & Valcour together?

Jocelyne: It started a long time ago, not long after we moved from Paris to New York. In 1996, at the Brooklyn Public Library, I came across a copy of Aline et Valcour. I’d never read Sade (I knew John had) but I found this particular novel extremely interesting. In long parts it read like a page turner, which was unexpected. There was a visual quality to the way Sade wrote this novel, a theatrical quality. Then, too, Sade himself seemed to invest parts of himself in every character, even though they express diverse points of view. Especially interesting was the appearance of a major character, Léonore, in the latter part of the book. She lends the whole novel a liberating quality. She’s modern in the sense of being assertive, anti-religious, unwilling to be seduced but willing to take chances. Overall the novel had a powerful effect on me. Then in 2007, we were looking for a new project. I didn’t know the book had never been translated, but John did. That was when we started.

John: I’d been involved with Sade’s work since the late 1980s, and I knew something about his increasing significance as a literary icon across the 20th century; and it seemed to me he was exceptionally relevant today, in a time of political and social turmoil. I’d read his novel Juliette very carefully, making an index of its themes and characters. But I only actually read Aline and Valcour when we translated it. I was astonished by its coherence, by Sade’s attention to character and to the wealth of ideas that they express. It’s not at all didactic like Rousseau can be in his fiction, nor is it a libertine tale like Les Liaisons Dangereuses. Rather, as he states, it’s a philosophical novel that takes you through a complex story weave from beginning to end.

2. Can you describe the process and methods you used in order to translate together as a team? What sort of challenges arose for you while working together?

Jocelyne: We’ve always worked the same way. I translate a first draft, John edits that draft. Then we reconcile, more than once, usually. We have no trouble working together. We stop to solve problems such as voice and vocabulary. In terms of challenge, the process with Aline and Valcour was not always simple and direct. We went through the book several times, sentence by sentence, which is not easy with a novel that’s more than 800 pages long. But we didn’t have a deadline, so it could be done.

John: People would ask if we argued over words or phrases. No, we didn’t. It just took effort to find the right translation. We would return to various puzzling passages and sometimes had to investigate etymologies of words, or historical aspects of the text. We benefitted from the wealth of knowledge on the Internet, but in revising the text we always worked from the book in French and the manuscript on paper.

3. As I was reading and writing about Sade’s novel I got very extreme views about his life and writing. Readers adore and appreciate his work or think he was a vile person whose writings should be forgotten. What types of reactions did you get as you were working with Sade’s text?

Jocelyne: We were not much exposed to the critics of Sade. Most of our friends are translators or educators in one way or another. So they understand enough about Sade to know he was not all about cruelty and sexuality.

John: There’s a literature of denigration around Sade, and it flows out of and into the popular imagination. The only thing was that after we received a grant from the NEA, we were attacked by the right-wing press.

But you should realize that Sade is a major thinker who was long neglected, especially in the Anglo world. His sulfurous works were translated in the sex-drenched 1960s, mainly by Austryn Wainhouse, and to considerable acclaim, yet in the popular press he was still tarred as a pornographer.

4. The three-volume translation of Aline & Valcour is incredibly smooth and flows beautifully. Sade seems to translate well into English. Were there any parts of the novel, however, that you found particularly challenging to render into English?

John: Here was where our collaboration counted. Sade translates cleanly into English if you take the time with his vocabulary and sentence constructions, some of which are very long indeed, to see and hear what he’s after, which is usually quite precise. I had a good grasp of Sade’s underlying ideas, and Jocelyne could critique the English formulation and phrasing to avoid unnecessary baggage. When I would hear her say, of a tentative translation, “C’est lourdingue,” which she did often (meaning “clumsy, heavy, annoying”) I knew we were in for a discussion about how to rephrase and rework.

5. Why do you think that Sade is an author who is still relevant in the 21st century and why should we still be reading and thinking about his work?

John: Like Lucretius and Spinoza, Sade is an atheist. He effectively belongs to what Jonathan Israel has delineated as the radical (as opposed to moderate) Enlightenment. His relentless materialism has a good fit with science and the real world as it has come to be characterized in the past 200-plus years, in ways that such thinkers such as Hume and Voltaire do not. In the wake of the Holocaust and in the presence of an interconnected world, Sade is more relevant than ever.

6. What translations projects are you both currently working on?

Jocelyne: We are finishing translation of an autobiographical account of a well-known thief, Rédoine Faïd, who specialized in robbing armored trucks, like Brinks. He’s currently in prison. When that’s done we’ll start Ce qui n’a pas de prix, a terrific cultural critique by Annie Le Brun, who is in fact a Sade specialist.

7. What authors–writing either prose or poetry in any language—are you currently reading that you would recommend?

Jocelyne: My reading is mostly in English. I’ll just mention Thomas Hardy’s The Mayor of Casterbridge, which I admired for the beauty and skill of the writing and the incredible story he tells. Another is Frank Norris’s McTeague. On a lighter note, I’ve enjoyed reading the series of crime novels by Jean-Patrick Manchette.

John: I’m reading now, for the first time, Stéphane Mallarmé’s Divagations and am enjoying Theodor Adorno’s Minima Moralia. I still read a lot around Sade, so now too Jürgen Osterhammel’s The Transformation of the World and Andrea Pitzer’s One Long Night, a history of concentration camps. On a daily basis, I read Lautréamont. The black humor of Les Chants de Maldoror always resets my mood to good, especially helpful in times like ours.

For more information about this unique novel I have written a blog post for each of the three volumes published by Contra Mundum: