Some Words are Worth a Thousand Pictures

*A bit of a warning that this is not my usual post about books. It is deeply personal and sad.

What a difference a day makes. Isn’t that how the song goes?

On July 1st I was in the garden reading poetry, lots and lots of poetry and Esther Kinsky’s book Grove which is newly translated into English by Caroline Schmidt and thinking about a review of it for Music & Literature; I had finally just gotten my hair done since the moratorium on such things because of Covid had lifted. And I stopped at the pet food store to buy more (a lot more) food for the birds and chipmunks I’ve been feeding on our deck.

On the afternoon of July 2nd my daughter and I were just about to go swimming when we noticed a car in our driveway which startled both of us. We live in the country, out in the woods, and have a quarter mile long driveway so random, unannounced visitors are a rare occurrence. It was my daughter who first said, “That’s a state police car” and my heart started beating even faster. Different things began to go through my mind as to what the police could possibly want with us. Was I speeding somewhere? But I hadn’t driven on the highway, or much at all really, because of Covid. Did I go into a business without wearing a mask? But, once again, I had barely left the house since the pandemic. When I think back on all of the petty and ridiculous scenarios going through my head I feel silly and naive. When the officer asked me to identify myself and to speak to me alone without my daughter I was still clueless.

“Your husband was riding his motorcycle on US-24 east in Indiana ma’am and there was an accident.”

And desperately, “Well where is he now?”

“At the coroner’s in Wabash County, ma’am. You’ll have to contact the Indiana state police.”

Alan had left on June 20th for what would be his third cross country trip from our home in New England to Montana. On that horrible day, July 2nd, a Thursday, he was on his way back home to us and was expected to arrive on Friday. He was a serious and avid motorcyclist and camper and enjoyed every minute of planning his trips and taking them. Locally he would meet with his friends from the Connecticut Rockers to ride and talk bikes but he also had a wonderful network of friends he met through Adventure Rider that were scattered across the US and Canada. A tough, stoic, yet gentle and kind group of men, their meet up in Montana had become a yearly tradition that they enthusiastically looked forward to. Alan considered them brothers—as an only child he always said that friendships were particularly important to him. 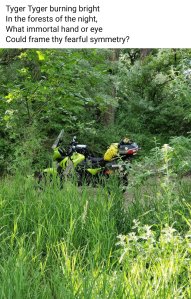 I met Alan in 1997 when we were both graduate students in the PhD program for Classics at the University at Buffalo. We liked each other instantly and like quickly grew into love. He had a bike, a Honda CX 500, when I met him so his passion for this hobby is something he had for more than 20 years. He learned everything he could about motorcycles and was meticulous about maintenance and repairs. He was also obsessed with safety, researching and discussing with his friends the most up-to-date safety gear. On the day he was killed it was 90 degrees f. and he had on a brand new, full-face helmet, a custom made Aerostich riding suit, and the highest quality gloves and boots he could find. He had certain rules about riding as well: he never went over the speed limit, he didn’t ride with other groups of bikes, and he didn’t ride at night. To say that he was careful would be a gross understatement.

But he was killed anyway. Yes, killed. He didn’t just die. He didn’t have bad luck, it was not an “accident”—I hate that word. The driver of the truck that killed him went through a yield sign and pulled across the highway–yes, the highway since such things are allowed in Indiana—directly into Alan’s path. A “failure to yield the right of way.” Negligence, stupidity, carelessness.

Two broken legs, two broken arms, a fractured pelvis, a fractured skull, broken ribs, fractured vertebrae, internal bleeding, lacerated organs and a complete atlanto occipital dislocation. A destroyed Triumph Tiger and all of his carefully packed belongings broken and strewn across the highway. And in that moment my life—our life together—was shattered as well.

November 18th of this year would have been our 20th wedding anniversary. We were happy, very happy. Our relationship wasn’t perfect. No relationship is, especially if it lasts 20 years. We both made mistakes. But there was a lot of kindness, and patience and forgiveness and love. A lot of love. We both taught Latin in secondary schools in New England which is where we decided to move after our days in Buffalo. I always thought it was hilarious that we did well for ourselves as teachers of what people call a “dead language.” But Latin, and sometimes Ancient Greek, sustained our household quite adequately and, more importantly, we both loved what we did. In 2006, after suffering an initial miscarriage, we had a daughter who is the best of both of us. She is kind and funny and smart and adorable.

And now my 14 year-old daughter asks me questions like, “Is daddy in heaven?” “Are we going to be poor?” “Will we ever be happy again?” “Are kids going to treat me differently at school because I don’t have a dad anymore?”

A failure to yield the right of way….

I keep having these conversations with him in my head about what happened to his precious bike and his camping things and what paperwork I have to file and who I have to call and how his students and colleagues and motorcycle friends have all been stricken with such grief by his sudden death and how to carry on now. But there is no “we” anymore. Just a mountain of paperwork and chores and decisions that need to be made on my own. The little routines we had are what I miss most—going to bed together, him making me coffee in the morning, watching silly TV, sharing bad jokes, debating over who Henry our tuxedo cat liked better. The loneliness and the emptiness without him is the worst pain I’ve ever suffered. Truly unbearable.

Now that our daughter is about to begin high school we had had many discussions about what we wanted to do when we retired. Various ideas about moving farther north in New England or closer to where our daughter might attend college were always tossed around. But no matter what we decided to do, it would be together—just the two of us, empty-nesters.

But these plans, too, were shattered on that highway in Indiana.

Alan and our daughter.

Alan had a dislike for social media—the only place he really engaged with people in a meaningful way was on his Adventurer Rider motorcycle forum. So out of respect I never posted about him or shared photos. But since he was killed it has felt cathartic and therapeutic for me to post photos and memories and anecdotes—a small glimpse into the man he was and our happy life together. His quick and sardonic wit were unmatched—one of the qualities that attracted me to him the most. He wore bow ties to work (when we were at work) nearly every day; he was a gifted teacher who connected with students and prided himself on his ability to lecture and engage kids at every level (he was voted faculty member who is most quotable three years in a row); he loved notebooks and fountain pens; even in winter he would work on, improve, and maintain his two motorcycles and camp in the woods on our property. And more recently he took up blacksmithing and set up a makeshift forge in the yard. I’m still not sure what to do with the anvil and giant bag of coal I have sitting in his workshop. 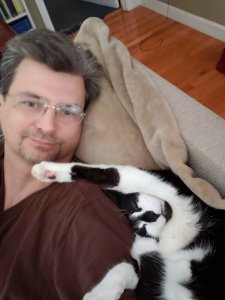 Alan’s belongings, scattered across that highway, have been respectfully and lovingly packed and returned to me by one of his motorcycle friends—the last person to see him alive—who happens to live in Indiana. Today his travel journal arrived and I began reading it and looking through his various notebooks. He had an obsession with notebooks and today, alone, I found a dozen of them around the house and in his workshop. They are mostly filled with to-do lists, travel plans, travel descriptions, packing lists and notes for teaching. His wit, his talent as a teacher, and our everyday life together–those little routines I mentioned—are all present in these notebooks. I felt closer to him reading these than I have since he was killed—as he wrote in one of them, “Some words are worth a thousand pictures.” And a passage he composed for a lecture to first year Latin students felt like he was speaking to me now:

The Greeks and Romans thought of the universe by picturing it as a tapestry—one that was constantly being woven, but never to be completed. Three divine weavers called the Fates created the tapestry of the universe—Lachesis, Clotho, & Atropos—who spin the wool, measure the thread, and cut it. Each thread is a human life. And all of these threads interconnect. You cannot tamper with one without unraveling the others. Although individual life-threads come to an end, they still have their place and interact with others.

That thread, Alan’s thread, cut too soon on that highway in Indiana. And my thread and my daughter’s so interconnected with his own. And all of the wonderful people interconnected with me—friends, and colleagues and Twitter people and readers of this blog who have reached out with love and support. Proof that his theory of those interconnected life threads is so true.

A failure to yield the right of way.

94 responses to “Some Words are Worth a Thousand Pictures”