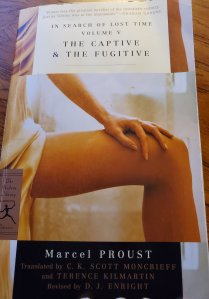 After the death of the Emperor Domitian, the Roman historian Tacitus decides to write a biography of his father-in-law, Agricola, who suffered through this tyrannical, oppressive and cruel regime.  Agricola, who served as a general and governor of Roman Britain under Domitian,  was an example of a virtuous man who stood up against the Emperor’s despotism.  In the opening of his Agricola, Tacitus lays out the guiding themes for his biography and, in particular, he contrasts the freedom (libertate) of the previous generation with the servitude (servitude) of his contemporaries under the reign of Domitian (Latin translations are my own):

We have provided a great deal of evidence of the suffering that was perpetrated; and just as the previous epoch saw what would be the extremes of freedom, so now in this age we see the extremes of servitude, especially since our ability of speaking and listening has been taken away through interrogations.  We would have destroyed our memory itself along with our voice, if it were as easy for us to forget as it was to keep silent.

Now that Trajan is Emperor, Tactius explains, freedom is slowly returning, but it is difficult to forget this disease to which a generation of Romans were subjected.  Although it was a span of only fifteen years, Tacitus calls Domitian’s reign of terror grande mortalis aevi spatium (a large interval of human life).

It’s no coincidence that Proust chooses to quote Tacitus’s opening lines of the Agricola in the penultimate volumes of In Search of Lost Time.   The Fugitive and The Captive, as the names imply,  are similar to Tacitus’ biography in contemplating freedom and servitude, memory and speech, and the effects these things have on our lives.   In Proust’s narrative, the tyrant to which both the narrator and his mistress are subjected, which curbs their freedom, is their terrible behavior in relation to Love.  The narrator is at a party given by the Verdurins whose faithful clan of followers of their salon at one time included Odette and Swann.  Brichot, an academic who has been part of the little clan for twenty-five years comments to Marcel about the drawing room at the Verdurins: “There look at this room, it may perhaps give you and idea of what things were like in the Rue Montalivet, twenty-five years ago, grande mortalis aevi spatium.”  To Brichot the old furnishings connect past and present, they remind him just how long he has been part of this little clan.

But there is a deeper level of meaning here when this passage is examined in light of Tacitus’s influence.  The Verdurins, for all these years, have acted like tyrants towards their followers from whom they expect constant attendance at their gatherings.  If one of their band falls in love and is thus in danger of abandoning their weekly parties, the Verdurins immediately step in and do everything in their power to break up the couple.  It is in the midst of one of these forced break-ups–that of Charlus with his lover Morel–that Brichot makes his remark about the large interval of human life.  Not only do the Verdurins have control over their group, but they relish in their bad deeds and their tyranny.  Even Charlus becomes their victim when their false accusations cause the Baron’s lover to break with him in front of everyone: “The fact remains that, in this salon which he despised, this great nobleman…could do nothing, in the paralysis of his every limb as well as his tongue, but cast around him terror-striken, suppliant, bewildered glances, outraged by the violence that was being done to him.”

The narrator himself, while being drawn into the Verdurins’ little plot against Charlus, is having his own struggles with servitude.  He has been keeping his mistress, Albertine, in a room in his parents’ apartments and he only allows her to go out if she is with him or otherwise supervised.  He knows that what he is doing is not right and suspects that he is making her unhappy.  He thinks about the days before she was his “captive” when she was the very embodiment of libertate (freedom) in her life of biking, golfing, and visiting friends at Balbec: “And it was curious to remark how fate, which transforms persons, had contrived to penetrate the walls of her prison, to change her in her very essence, and turn the girl I had known into a dreary, docile captive.”

But the narrator himself also feels as if he lacks freedom because of his feelings of extreme jealousy and his incessant plots to keep Albertine captive.   He oftentimes refers to his own situation as “my servitude” and tries to convince himself that he doesn’t love her or is indifferent to her: “That vague fear which I had felt at the Verdurins’ that Albertine might leave me had at first subsided.  When I returned home, it had been with the feeling that I myself was a captive, not with that of finding a captive in the house.”  What is most maddening to read in these episodes is the narrator’s attempt to manipulate her by doing and saying the opposite of what he thinks and feels.  In the face of his amorous dilemmas, he keeps silent, the same sin that Tacitus finds fault with in his contemporaries.  Marcel pretends he wants Albertine to leave when all he really wants is for her to confirm her feelings for him and to stay with him indefinitely.  He won’t admit his jealousy, he won’t admit his love for her, and most importantly, he won’t admit that he wants her to stay with him forever.

When all of his ridiculous, manipulative plans fail and he manages to drive Albertine away, he finds that his memories are the most painful things to endure.  She was a constant, reassuring presence in his life and he must go through the grieving process and hope his memory fades now that Albertine has regained her freedom: “The bonds between ourselves and another person exist only in our minds.  Memory as it grows fainter loosens them, and notwithstanding the illusion by which we want to be duped and with which, out of love, friendship, politeness, deference, duty, we dupe other people, we exist alone.  Man is the creature who cannot escape from himself, who knows other people only in himself, and when he asserts the contrary, he is lying.”

As he tries to grieve and he tries to forget, Marcel painfully realizes that his time with Albertine, her presence in his life, no matter how much he tries to deny it or feign indifferent, was a grande spatium.  As I read Proust’s chapter “Grieving and Forgetting,” I can’t help but think that, as he was writing, he was keenly aware of another phrase in the same passage of Tacitus’s introduction to his Agricola: — Non tamen pigebit vel incondita ac rudi voce memoriam prioris servitutis ac testimonium praesentium bonorum composuisse.  “It will not pain me to have recorded the memories of my prior servitude, albeit with a crude and disorganized voice, nor  to have  recorded the circumstances of my present good fortune.”

6 responses to “Grande Mortalis Aevi Spatium: Freedom and Servitude in Tacitus and Proust”