The Little Patch of Yellow Wall: Proust on memory, regret and death 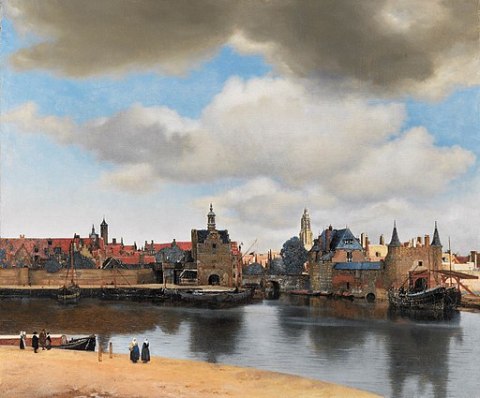 I keep rereading the same two pages of The Captive in which Proust creates an emotional narrative that involves  reflections on Vermeer’s View of Delft, memory, the art of writing, regret, death and reincarnation.  There isn’t much to say about these passages, and analyzing them would ruin the experience, I think.  But I hope others will enjoy this selection of his writings as much as I have.

The scene is the death of Bergotte, the narrator’s favorite author whom he has also gotten to know personally through the years.  Bergotte has been ill for quite some time and has been advised by various doctors to stay in bed.  But when an art critic describes a brilliantly painted yellow wall in Vermeer’s View of Delft, Bergotte has to go and see this painting for himself; it bothers him that he thought he knew this work by heart but he has no recollection of this yellow wall:

At last he came to the Vermeer which he remembered as more striking,  more different from anything else he knew, but in which, thanks  to the critic’s article, he noticed fore the first time some small figures in blue, that the sand was pink, and, finally, the precious substance of the tiny patch of yellow wall.  His dizziness increased; he fixed his gaze, like a child upon a yellow butterfly that it wants to catch, on the precious little patch of wall.  ‘That’s how I ought to have written,’ he said. ‘My last books are too dry, I ought to have gone over them with a few layers of colour, made my language precious in itself, like this little patch of yellow wall.’  Meanwhile he was not unconscious of the gravity of his condition.  In a celestial pair of scales there appeared to him, weighing down one of the pans, his own life, while the other contained the little patch of wall so beautifully painted in yellow.  He felt that he had rashly sacrificed the former for the latter.

I suppose when all is said and done, like Bergotte, we all have some version of that little patch of yellow wall….

Bergotte collapses in front of this painting and Proust’s commentary on death, the soul and the afterlife I found surprisingly… hopeful:

He was dead.  Dead for ever?  Who can say? Certainly, experiments in spiritualism offer us no more proof than the dogmas of religion that the soul survives death.  All that we can say is that everything is arranged in this life as though we entered it carrying a burden of obligations contracted in a former life; there is no reason inherent in the conditions of life on this earth that can make us consider ourselves obliged to do good, to be kind and thoughtful, even to be polite, nor for an atheist artist to consider himself obliged to begin over again a score of times a pieces of work the admiration aroused by which will matter little to his worm-eaten body, like the patch of yellow wall painted with so much skill and refinement by an artist destined to be for ever unknown and barely identified under the name Vermeer. All these obligations, which have no sanction in our present life, seem to belong to a different world, a world based on kindness, scrupulousness, self-sacrifice, a world entirely different from this one and which we leave in order to be born on this earth, before perhaps returning there to live once again beneath the sway of those unknown laws which we obeyed because we bore their precepts in our hearts, not knowing whose hand had traced them there—those laws to which every profound work of the intellect brings us nearer and which are invisible only—if then!—to fools.  So that the idea that Bergotte was not dead forever is by no means improbable.

Filed under French Literature, In Search of Lost Time, Proust

8 responses to “The Little Patch of Yellow Wall: Proust on memory, regret and death”