What Has to be Said is Unutterable: Contre-Jour by Gabriel Josipovici 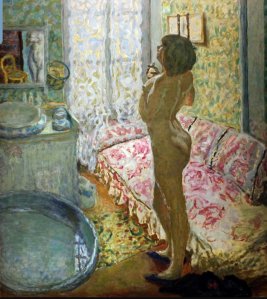 The artist in Josipovici’s short novel tries to explain the difficult of creating art and painting, “It’s that what has to be said is unutterable. Or else: How can we tell what is the right language?  The proper tongue? That which is licit?”  Art demands a certain silence, when creating it and viewing it.  Josipovici captures the essence of this silence in both the art and the artist himself in this deceptively complex narrative which he subtitles, “A Triptych after Pierre Bonnard.”

The painter, his wife and their daughter each have a section of the book in which they describe their life together, a life that is dominated and overpowered by the artist’s desire to paint.  The first section portrays a grown daughter who is bitter and angry at her parents because she feels rejected by them.  There is no place for her, she feels, in their family and the pets received more attention than she did.  Like Bonnard’s “Nu a Contre-Jour” painting, the most important figure in the book is the artist’s model, his wife.  She meets the artist when she is working as a model and for the next 45 years she becomes his only model.  He draws and paints her incessantly, especially in the bath.  Also similar to Bonnard’s paintings, the bath is a common scene in the book as the wife soothes a severe skin rash by bathing four times a day and the artists sketches her during these baths.

But as the wife’s narrative progresses it becomes apparent that she is suffering from a mental illness and the baths become a compulsion that sooth her physically and mentally.  It’s as if she is trapped in her marriage and in her husband’s paintings.  Her entire life has been reduced to being his model and she gets no respite from the art or from his compulsion to create.  In addition, the wife’s description of their life and her confusion call into question the entire interpretation of the story, especially the first part which involves the daughter.  Like any piece of art, our perception changes the more we interact with it.

Silence is used in many forms throughout the book.  Unanswered letters, telegrams, and telephones.  Passing notes instead of talking.  The wife silently pretends to sleep to avoid interacting with guests.  In the terse and succinct writing, questions are answered by repeating the questions.  And, of course, there are long periods of silence needed by the artist to work.  We realize at the very end, when the painter himself finally speaks, just how much silence has permeated their lives.  On the death of his wife the artist writes a one page letter to a friend expressing in raw, stark language how devastating his wife’s death is for him.  He is filled with grief, loneliness and anxiety.  But why did he keep silent about his true feelings for her when she was alive?

This was my first Josipovici book and its strange and unexpected story has intrigued me and made me eager to explore his writings further, especially his non-fiction.

22 responses to “What Has to be Said is Unutterable: Contre-Jour by Gabriel Josipovici”