Some Concluding Thoughts on Musil’s The Man without Qualities 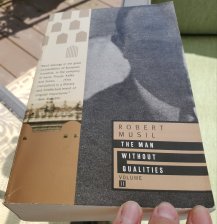 It’s impossible to do any kind of a coherent analysis of Musil’s brilliant, enigmatic, philosophical, unfinished magnum opus.  But I thought I would share some final ideas that kept coming to mind as I read Volume II in the Sophie Wilkins translation.  It can’t be a coincidence that Musil chose Diotima and Agathe, names from Plato’s Symopsium, for his prominent female characters.  Similar to Plato, Musil uses his characters that are sometimes quite serious, and oftentimes ironic or sarcastic to explore the topics of Eros (Love), beauty, goodness and morality.  Musil is interested in the passions that are sparked by physical love, but also the beauty and insight that Eros inspires when felt on a deeper level.  But none of his characters ever achieve a higher or successful or even contented state of Eros.  Diotima and Agathe are both married to taciturn, duty bound and stern men who satisfy them neither physically or intellectually.  When Diotima, who is described as a voluptuous beauty with her hair always in a perfect Grecian knot, begins to spend with a Prussian business magnate named Paul Arnheim, her emotional and intellectual connection with him allows her to see the beauty in other things around her.

But Diotima learns that it’s one thing to discuss a higher level of Eros that excludes a physical relationship and quite another issue in real life to be content in such a situation.  Neither she nor Arnheim can make the first move towards a sexual relationship and both are tormented by it.  At the beginning of Volume II, Diotima’s unhappiness due to her lack of fulfillment in the realm of Eros causes her physical symptoms in the form of cramps and migraines.  So she adjusts her strategy, and her library, in order to become a sexual expert and train her husband to become more of a “successful” husband.  In the end, however,  all of her newly acquired knowledge still doesn’t make up for the lack of an emotional connection with her now very confused and brooding husband.

The only relationship in Musil’s narrative that comes close to being a success is that developed between Ulrich and his sister, Agathe, with whom, before their father’s funeral, he hadn’t interacted since childhood.  They, too, have an instant emotional and intellectual connection and Musil hints at an incestuous affair between brother and sister.  One of these most obvious hints is from Agathe herself who summarizes Aristophanes speech from Plato’s Symposium:

‘You know that myth Plato tells, following some ancient source, that the gods divided the original human beings into halves, male and female?’ She had propped herself up on one elbow and unexpectedly blushed, feeling awkward at having asked Ulrich if he knew so familiar a story; then she resolutely charged ahead: ‘Now those two pathetic halves do all kinds of silly things to come together again.  It’s in all the schoolbooks for older children; unfortunately, they never tell you why it doesn’t work!’

And even this bond between brother and sister isn’t fulfilling enough for Agathe who, after an upsetting letter from her estranged husband, desperately needs a hug from Ulrich but instead gets a lecture on morality.   Even when Musil is dealing with political, religious or moral subjects, he tends to insert an idea or two about Eros.  In the last few pages of Volume II, as the leaders of the Parallel Campaign are still trying to figure out what to do for their Emperor’s 70th Jubilee, as different political factions try to insert their opposing agendas on the planning, Ulrich says,

‘These people aren’t so far wrong, you know, when one of them accuses the other of wanting to love if he only could, and the other retorts that it’s all the same with wanting to hate.  It’s true of all the feelings.  Hatred today has something companionable about it, and on the other hand, in order to feel what would really be love for another human being—I maintain,’ Ulrich said abruptly, ‘that two such people have never yet existed!’

I was thinking of reading the Posthumous Papers translated by Burton Pike sometime in the winter which continues some of Musil’s story.  But, then again, it seems fitting that Musil’s work is unfinished.  All of these characters would have had their lives disturbed and/or destroyed by the impending Great War and they certainly never would have come to any definitive conclusions about love, beauty, morality, or what to do about the Parallel Campaign.