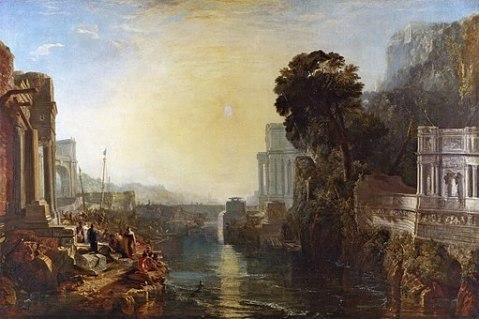 In Book I of Vergil’s Aeneid, when the epic hero lands in Carthage after surviving a violent storm at sea, he encounters the Queen, Dido, and its inhabitants in the midst of building their city.   Vergil uses one of his most famous similes to describe this communal activity in which the Carthaginians are engaging.  In Aeneid 1.430-436 Vergil writes(translation is my own):*

Just as work drives the bees under the sun
in early summer throughout the florid countryside
when the adults of the hive lead forth the young,
or when they store the liquid honey
and stuff the cells with sweet nectar.
Or when they receive the deliveries of those
arriving, or ward off, having formed a
phalanx, the drones—a lazy swarm—
from the hive; The work seethes and the
fragrant honey is redolent with thyme.

Building a city is a communal activity, and with this simile Vergil emphasizes that the sum is greater than its parts.  There is a feeling of hope and a bright future.  It’s also striking that, in addition to supervising the building of their hive, that the bees ward off danger and protect their home.

I have written in a previous post about Tolstoy’s Homeric influences, but as I was reading the last third of War and Peace, his elaborate similes and metaphors have struck me time and again as being rather Vergilian.   My suspicions were confirmed when Tolstoy uses an elaborate metaphor involving bees to describe the relinquishment and subsequent destruction of the Russians’ beloved “Mother Moscow.”  The inhabitants know that the French are marching towards their city and they would rather run away than submit to foreign rule.  Tolstoy uses the bees as an extended metaphor and completely and ingeniously inverts Vergil’s simile.  The city is destroyed, there is no hope for her, and instead of protecting their home, the inhabitants—from the governor to the upper classes to the peasants to the serfs—utterly abandon their home to the enemy. Tolstoy  writes about deserted Moscow:

In a queenless hive no life is left though to a superficial glance it seems as much alive as other hives.

The bees circle round a queenless hive in the hot beams of the midday sun as gaily as around the living hives; from a distance is smells of honey like the others, and bees fly in and out in the same way.  But one has only to observe that hive to realize that there is no longer any life in it.  The bees do not fly in the same way, the smell and the sound that meet the bee-keeper are not the same.  To the bee-keeper’s tap on the wall of the sick hive, instead of the former instant unanimous humming of tens of thousands of bees with their abdomens threateningly compressed, and producing by the rapid vibration of their wings an aerial living sound, the only reply is a disconnected buzzing from different parts of the deserted hive.  From the alighting-board, instead of the former spirituous fragrant smell of honey and venom, and the warm whiffs of crowded life, comes an odour of emptiness and decay mingling with the smell of honey.  There are no longer sentinels there sounding the alarm with their abdomens raised, and ready to die in defence of the hive.  There is no longer the measured quiet sound of throbbing activity, like the sound of boiling water, but diverse discordant sounds of disorder. 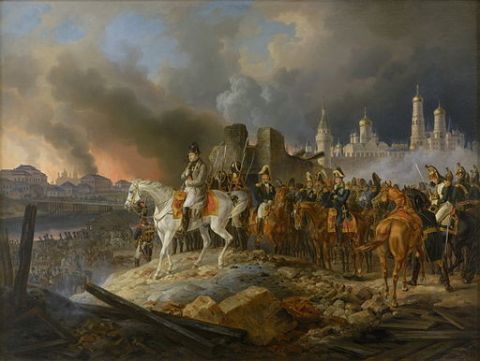 The metaphor goes on for the next page and a half in the Maude English translation.  Tolstoy portrays Napoleon standing on the Poklonny Hill outside Moscow with eager anticipation at his entry.  To him all things look normal, as they should be with a magnificent city,  but once he enters the gates he is bitterly disappointed to learn that Moscow is empty.  This place, without its people, is just a shell of its former self.  Tolstoy’s metaphor, I think, also has an underlying tone of hopelessness that foreshadows defeat not for the Russians but for Napoleon himself.  The author stresses the point in his narrative that the army’s dispersal throughout the deserted city and Napoleon’s extended stay in Moscow were contributing factors in the ultimate failure of the French army.  And finally, the bee metaphor is also apt for discussing Tolstoy’s theme of soldiers being individual yet important parts of an enormous whole which I also discussed in my previous post.

I will finish War and Peace in the next day or so.  I thought I would be immersed in this epic for a few months, but it has so captivated my attention that I am reading it every free moment I have and will finish much more quickly than planned.

*For the extra curious, here are the lines of the Aeneid I translated above in Latin: