Year of the Drought by Roland Buti 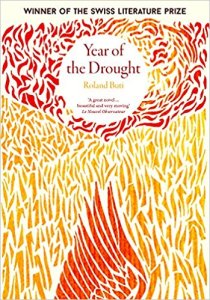 Thirteen-year-old Gus Sutter vividly remembers the summer of 1976 not just for the preternaturally harsh drought, but also for the incidents leading up to the disintegration of his family.  Gus, his mother and father, his older sister Lea, and a mentally challenged worker named Rudy live on the family’s farm in the Swiss plateau.  Buti’s take on a coming-of-age story is captivating because of the impending sense of doom and ruin that he weaves throughout Gus’s narrative.  All of the nature around them foreshadows the sad fate of this family; the crops are burning in the sun, the family dog, Sheriff, keeps fainting and their chickens are dying by the dozens in the heat.  The Sutter’s ancient mare, Bagatelle, who never moves from her barn has broken free from her rope and made her way down to the local river to die.  And finally, perhaps the most eerie omen of all, is that Gus has found a dove that cannot fly because its fail feathers have been destroyed by a predator.

The arrival of a strange woman named Cecile, an employee at a neighboring post office, is the first hint that something is wrong with the Sutter family unit.  Cecile seems  oddly close to Gus’s mother and he can’t quite figure out why their relationship makes him so uncomfortable.  His mother has never shown very much affection or emotion towards her family.  Gus’s description of her, the morning after he finds the wounded dove,  is particularly sad since it comes from her thirteen-year-old son who clearly craves his mother’s affection:

I was glad that she had petted my dove, accepted its presence without argument.  Mum was always busy with a multitude of tasks that no doubt helped to keep her from feelings of despair.  I would have liked to be in the bird’s place.  I would have liked her to set down her towel and dry her hands, to come over and kiss me, stroke my hair, tickle my neck with the tips of her fingers.  When I left for school, she would give me a dry peck on the cheek, a kiss from the very tip of her lips that echoed in the cool morning.  Lingering on my skin for less than a millisecond, her mouth imparted no sense of its moistness.  She never gave me a tender pat of encouragement to send me on my way.

She is too busy playing the role of mother, housekeeper and accountant to enjoy anything else in life, but Cecile awakens something in her that Gus has never seen before—genuine happiness.  Gus slowly realizes that Cecile is a threat to his family when he discovers that since Cecile has moved in, Gus’s father is sleeping in the guest room.  When Gus questions his father about it, he is ruthlessly scolded for not minding his own business.

The character for whom I had the most sympathy was Gus’s father, Jean.  He inherits his farm from his own father and works from sun up until sunset to make barely enough of a living on which to sustain his family.  He is a man of few words, so it is through his actions that he demonstrates his unique, unconditional love for his wife, even when she abandons him, their children and the farm.   One night at dinner when Cecile encourages Gus’s mother to get a job, Jean nearly chokes Cecile to death in a fit of rage.  Later on, a group of neighbors make fun of Jean because of his wife’s indiscretions with Cecile and he punches and kicks these men until they can no longer stand.  But as revenge, those same men beat Jean with farm tools until he can’t walk and has to stay in bed for days.  Even Gus himself, who makes a disparaging comment about his mother after she leaves, is punched in the mouth and knocked out by his father.  As his wife drifts further and further away from him, he seems to be preparing himself for the inevitable.  Gus observes about his father:

He seemed to have decided that only objects and animals were worthy of his consideration.  He would carefully examine each tool he picked up, as if a pitchfork or a shovel could bring some answer to the problem of suffering.  He had taken to sitting down in front of Sheriff and staring at him, which made our dog uncomfortable, unused as he was to being treated as anything more than part of the furniture.  He would hang his head to the side quizzically, tongue hanging out, as if waiting for an explanation.  The truth was that Dad was training himself for solitude.

Gus’s father, after his wife leaves and the children are on their own, spends his days alone at the farm.  A very sad fate for a kind, honest, hardworking man who loved his wife, his family and his land.  Buti has created a memorable group of characters whom he fittingly sets among a vivid and harsh landscape.

Thanks to Grant at 1st Reading for recommending this book to me.  Please stop by his blog and read his wonderful review of this novel: https://1streading.wordpress.com/2017/09/07/year-of-the-drought/

6 responses to “Year of the Drought by Roland Buti”